At the intersection of Kingsway and Glen in Vancouver’s Little Saigon neighbourhood, a new rental tower development is being proposed on the site of Stan’s Transmission. The old-school car repair shop, evocative of mid-century Los Angeles with a two-tier parking structure and palm trees by the front office, is a long-standing Vancouver landmark on this stretch of Kingsway. It is now set to be replaced with a 13-storey tower of mostly high-end rental housing.

The existing zoning for the area allows for building new low-rise buildings, in line with the character of the neighbourhood. However, Stan’s Transmission is just one of a dozen major development proposals that go well beyond allowable density in the neighbourhood. The city’s new policies for building rentals are meant to create greater housing affordability. However, these new developments are set to gentrify Little Saigon and Kensington-Cedar Cottage.

This will make the area less affordable for low-income renters and those running small-scale businesses.

Locals like Randy Hunt, Yen Do and John Lillyman will tell you in this article what makes this neighbourhood special. Consider the social fabric at risk of being shredded.

In the face of an out-of-control rental market, last winter the City of Vancouver conducted a major study to identify policies that could help to create greater affordability for renters. One of the key problems facing the city is a lack of supply of affordable housing, which places a rent-burden on many households and has led to increasing rates of homelessness.

In response, the current government has proposed the new Moderate Income Rental Housing Pilot Program. MIRHPP allows developers to build taller and denser if they are willing to meet some conditions: keep the building rental housing only, and set aside some units the city deems “affordable.” This type of policy is known as “density bonusing,” which means that developers can build outside existing zoning permissions, thereby making more profit, and in exchange provide a social benefit, such as rental housing units.

WHERE IS LITTLE SAIGON? 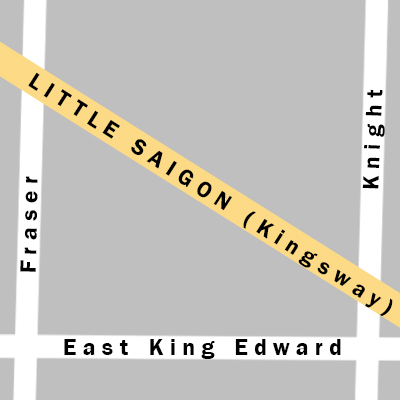 Little Saigon is the stretch of Kingsway between Fraser and Knight streets, though Vietnamese businesses can be found along most of Kingsway in Vancouver.

Density bonusing, favoured by former mayor Gregor Robertson and Vision Vancouver, has been criticized by researchers and community advocates for its negative effects. They have shown when large new developments containing some low-income housing and lots of high-income housing are built, the neighbourhood shifts in favour of newcomers. Small-scale landlords often raise their rents to match the incoming demographic and narrow the price gap with new developments. Accessible businesses like small grocers and delis are replaced by specialized businesses catered to the new residents able to afford higher rents, like juice bars, tapas restaurants and high-end marijuana dispensaries.

One of the early examples of this paradox in Vancouver is the mixed-income Woodward’s project in the Downtown Eastside. Woodward’s created some social housing, but it led to a large-scale displacement from nearby SRO hotels and commercial gentrification. A 2012 report from the Carnegie Community Action Project found that 426 units of welfare-rate private housing were lost in the blocks surrounding the development.

It’s been 10 years since Woodward’s opened, and it has had a major hand in the gentrification of the Downtown Eastside. Now the same justification is being used to argue for more density and rental housing in Little Saigon.

In the case of the tower set to replace Stan’s Transmission, the developer Peterson is being asked to designate 20 per cent of the units for people making between $30,000 and $80,000 a year — a definition of affordability that has been questioned by city councillors Pete Fry and Jean Swanson. The remaining 80 per cent, about 100 units, can be market — or luxury — rentals. For example, a one-bedroom apartment at the nearby Duke building, a rental project approved under the city’s previous Short Term Incentives for Rental program, currently goes for $2,400 a month.

While the price of a single-family home in Little Saigon has more than doubled in the past decade, the area still offers affordable rents in low-rise apartments and basement suites. It also provides affordable amenities, like the ubiquitous five-dollar banh mi sandwich in delis throughout the neighbourhood.

However, we can see the effects of proposed new developments already. Longstanding institutions in the neighbourhood are now up for sale, including a community pool hall, Bi Da Cafe Kiên Giang, the longstanding Hoy’s Wonton House with $6 lunch options, and the South Hill Family Health Centre, which provides care for local families.

These spaces are not dispensable. They are, as Melody Ma has recently documented in The Tyee, what make the area livable for low-income, immigrant and working class people. It is also a pattern that is already well-underway further along at Kingsway and Fraser, where high-end restaurants and businesses have saturated the intersection over the past 10 years.

What is under threat in Little Saigon is not only a relatively affordable area for renters — you can still find a two-bedroom apartment for $1500 — but also the fabric of one of Vancouver’s important ethnic neighbourhoods. This reflects a troubling pattern in Vancouver — densification and up-scaling in historically ethnic enclaves like Chinatown, Punjabi Market and now Little Saigon.

The fact there is no community plan for Little Saigon, and developments are being considered on an ad hoc basis, is a telling oversight that echoes the city’s history of allowing ethnic neighbourhoods, such as Japantown and Hogan’s Alley, to disappear.

In Chinatown in particular, there has been a backlash against urban development that allows large increases in density in exchange for marginal contributions to the city or neighbourhood. If the city truly wants to rectify past mistakes, it must do more to ensure Little Saigon is not irrevocably altered by mass speculation.

Allowing ad hoc density bonusing to address affordable housing is antithetical to good urban planning, especially in neighbourhoods with existing histories and character. When city councillors vote on rezonings, they consider sites on a case-by-case basis. However, the neighbourhood context also matters.

For example, within one block on Kingsway between Glen Drive and Windsor Street, three major redevelopments are proposed. They would drastically alter the demographics of the area, but cannot be considered holistically in the absence of a community plan.

A tale of two towers

Do the problems with the city’s current approach to Little Saigon and Kingsway mean we should reject all forms of increasing density, advocating for Not-In-My-Back-Yardism? No. The question of density depends on what the area needs to make it more affordable.

This can be seen through the contrast between two towers proposed in Little Saigon. The first on the site of Stan’s Transmission at Kingsway and Glen, and the second one block east, at Kingsway and Windsor, where the city is building 12 storeys of social housing.

If there is any form of housing that should be allowed to go beyond existing zoning, it is non-profit social housing, which will help to improve affordability, rather than increase speculation. Developers looking to build for-profit, high-end rentals should not be granted the same types of concessions from the city. Amendments to zoning should be used for public good, not private benefit.

As it stands, the vast majority of new development proposals in or near Little Saigon contain high-end rentals, with potential major redevelopments to replace the large Glad Tidings Church, and a former Rona hardware store.

What can city staff and councillors do to turn the tide? A good first step is to reject the high-end rental towers being proposed on a weak promise of affordability. Then to create a cohesive plan that will preserve Little Saigon as an affordable community.