The measures won’t get final approval until after a two-month consultation period.

But they offer radical improvements in tenant protection.

The most significant change would guarantee that any tenants displaced when a building with more than five units is demolished for a new rental or condominium project would be guaranteed similar apartments in the new building, at the same rent as their previous apartments.

The bylaw would also require the developer to provide a suitable replacement apartment during construction and cover any additional rent costs.

“Our updated Tenant Assistance Policy will make life more affordable for Burnaby residents, even as our city continues to grow,” he said in a statement. “Burnaby is a diverse city, and this will keep our communities that way.” 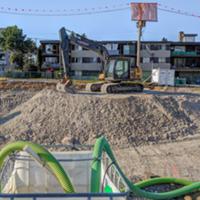 Burnaby’s new policy only applies when a property needs to be rezoned to allow the proposed development.

This limit is a consequence of restrictions in the Local Government Act and Section 54(2) of the Community Charter. Burnaby staff have asked council approval to seek expanded powers from the province, so the protections for tenant and rental units can be applied more broadly.

The proposed policy brings substantial new protection for Burnaby’s tenant population, especially in the Metrotown area where many purpose-built rental buildings have been replaced by high density condominium towers.

So far, the City of Vancouver has not promoted a similar policy for zones likely to face demoviction pressures and the loss of rental housing — like the Broadway Corridor, where a new subway line is likely to bring demolition of rental buildings in favour of condos.