Whatever Election 2019 turns into (my guess is mudwrestling), it will never be a beauty contest.

What else can the conclusion be when the leaders of both mainstream parties are so disliked?

Which means this election may boil down to which leading candidate most confirms voters’ worst impressions of him.

Last week Andrew Scheer did just that, handing Justin Trudeau a gift by summoning Stephen Harper’s endorsement in a political ad. More, in a bit, about why that was so monumentally dumb.

First, ponder a recent Angus Reid poll, reported in the Globe and Mail, that indicates Trudeau and Scheer should probably be considering a new line of work.

Fifty-two per cent of respondents don’t believe Andy is dandy. A whopping 63 per cent have an unfavourable impression of Justin the Sock Doll.

The Angus Reid Institute recently put the same information in a different way. Only one out of three respondents think Scheer would be the best PM. That should have the Conservatives biting their fingernails.

But the Liberals have zero reason to be smug. Even fewer, one in four, thought that Trudeau would be the best PM. It wasn’t that long ago that Trudeau could walk on water, with an approval rating in June 2016 of 65 per cent. Now he’s stumbling on terra firma.

One reason the Grits are still in the game is because a lot of people think under Scheer’s smiling, dimpled mask is one Stephen J. Harper.

Right on cue, in one of the party’s new ads, the starring role was given to Harper, or some Harper-like embalmed version of the former PM.

There is Harper telling people to elect Scheer and save the country. There is Harper dunning the audience for money like a televangelist newly converted to the Republican Party. And oh yes, there in the stock footage accompanying Harper’s pitch is a guy named Andrew Scheer. Apparently, he can’t make his own case for replacing Trudeau.

This was a monumental faceplant, no matter what the backroom smarty pants of the Conservative party may think about galvanizing the base. What Scheer has done by agreeing to this ad is to confirm what a lot of people have suspected all along: he is not his own man, but a creature of Stephen Harper, a grinning puppet.

Anyone paying attention would have noticed two things by now about Scheer.

First, as leader he never disavowed the ruinous policies of his predecessor, never declared that the party was striking out in a new direction, and never came up with an idea that would have put a frown on Harper’s face.

Second, Scheer is not a leader guy, rather a follow-the-leader guy. From tax cuts to family values, from foreign policy to the environment, from corporate handouts to barely disguised homophobia, the Scheer agenda is the Harper agenda.

That is precisely the agenda that got the Conservatives routed in the 2015 election. There is a reason that Harper had an approval rating of just 23 per cent in 2013 running up to the election. At the end of his political shelf life, he was seen as thuggish, deceitful and authoritarian.

By putting Harper up in an ad, Scheer has answered Trudeau’s prayers. In a straight up choice, voters might have chosen Scheer over Trudeau with both leaders deeply unpopular. But in a choice between Trudeau and a Harper puppet, the Liberals will hang on. Unwittingly, Scheer has started the Harper lowlight reel playing in everyone’s head:

Contempt of parliament; muzzling scientists; demonizing the media; lies about the F-35 aircraft acquisition; a $50-billion deficit by the spring of 2009 after promising no deficit in the fall of 2008; the decision to meet panda bears in Toronto rather than First Nations people who had walked through winter to protest their plight under the Conservatives, and on and on and on.

The fact that both party leaders are unpopular should remind everyone of the 2016 presidential election in the United States.

Donald Trump was the most unpopular presidential election winner in U.S. history. He won the White House in 2016 despite 61 per cent of Americans actively disliking him.

How did that happen? Hillary Clinton was also deeply unpopular. Though she got a few million more votes than Trump, she was vulnerable to defeat in the (dodgy) electoral college because she was so widely disliked.

Up until 2016, no losing presidential candidate had a higher unfavourable rating than 47 per cent, according to the Conversation. Clinton drove that number up to 52 per cent. Emails, leaked debate questions, cheating dear old Bernie Sanders — it all added up.

Trump’s victory was less of an endorsement of a glitzy conman than a contemptuous kick at what American democracy had become — Washington-centric and lobbyist-driven.

This is good news for the Conservative Party of Canada, given the recent release of a major study by Simon Fraser University.

That report, State of Democracy + Appeal of Populism, found that a majority of Canadians feel alienated by the country’s political system, just as Americans did in the run up to November 2016.

As reported by the CBC, nearly half of the study’s 3,500 participants didn’t believe that Canada is governed democratically.

Nearly 60 per cent of them are only “moderately convinced” that Canada should even be a representative democracy.

An eye-popping 70 per cent of participants believe that government officials don’t care what they think. Hell hath no fury like a voter scorned. That is not good news for any incumbent.

Trudeau could easily become the lightning rod for all those disaffected Canadians who think their democracy works for the top dogs but not for them. Scheer could do damage in the televised debates with skewer points like these:

Why did the PM take that free trip to a billionaire’s island? Is that what champions of the middle class do?

Why, at a time when Canadians believe our democracy needs fixing, did the Trudeau government break its promise on electoral reform?

Why did the PM defend interfering in a criminal case involving a corruption-ridden Quebec engineering company?

Why did he continue to do that even after the ethics commissioner found him guilty of breaking the Conflict of Interest law — not to mention withholding key testimony from the commissioner that he needed to complete his investigation? 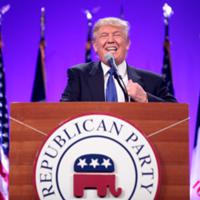 How Trump Killed the Myth of Coherent Conservatism

And then there was that disastrous interview where a Netflix host, Hasan Minhaj, made clear that the most progressive part of Trudeau is his sound bites. It shouldn’t be that easy for a comedian to take apart a G7 leader.

So you would think that Scheer would thank his lucky stars for the Trudeau record. Instead, he brings Harper back from the politically dead, the first serious tactical blunder of the campaign.

With the NDP melting like Greenland’s ice sheets under the star-crossed leadership of Jagmeet Singh, only two people can benefit from Scheer’s choice of a pitchman — Trudeau and Elizabeth May.

For Trudeau, the benefit will be to cut his losses and perhaps hang on to power by a thread; for May, it is a question of how high she can go.

With headlines about defections from the NDP in New Brunswick to the Green Party, the election’s biggest surprise is already in the making.*

*Story updated at 11:45 a.m. on Sept. 5 to clarify information about defections from the NDP in New Brunswick to the Green Party.