With the death of the young female orca calf known as J50 in the Pacific Northwest in September 2018, the population of southern resident killer whales has fallen to 74.

At the time, Ken Balcomb, the founder of the Center for Whale Research in Friday Harbor, Wash., said the world was “witnessing a slow motion extinction” of this population of killer whales.

Why are they in such dire straits? The three main stressors for this dwindling population are noise pollution from increased vessel traffic, ocean contaminants and declines in Chinook salmon — the whales’ main source of food.

Research shows that a quieter ocean may help save the southern resident killer whale population, but without regulations yet in place, it may be too little, too late.

Three groups of orcas — the transient, offshore and resident — live along the Pacific coast. The resident group is further classified into northern and southern populations that have some distribution overlap but do not interbreed. The southern resident population, typically found from southwestern Alaska to central California, is the only orca population in Canada listed as “endangered.”

Underwater ocean ambient noise has increased by approximately 15 decibels in the past 50 years due to increased marine transportation and other anthropogenic (human-made) sources.

Noise travels approximately five times faster in water than air and has a wide range of detrimental effects on whales. With increasing numbers of vessels plying the world’s oceans, their engine noise is making it hard for many whale species to communicate.

The documentary Sonic Sea likens anthropogenic ambient noise, such as that from vessel engines and drilling for oil or gas, to being trapped in a loud, dark nightclub, unable to see or hear the people right next you. While a human can leave a noisy nightclub, whales cannot escape these underwater noises.

According to a recent study, the frequency of ship noise overlaps with that of orca communication. It masks noises the orcas make and can interfere with echolocation, which orcas use for navigation and to hunt prey. For the southern resident killer whale population, the limited availability of Chinook salmon combined with vessel noise adds to the challenge of finding food.

The Haro Strait, off the coast of Victoria, is the summer feeding habitat of the southern resident killer whale population. It is also one of the loudest areas along the Pacific coast, especially in the frequency range that orcas use for communication.

As noise from vessels has increased in loudness and now covers a larger geographic area, killer whales have adjusted their vocal communication by increasing the amplitude of their calls to compensate for the underwater noise. But this increased vocal output could have energy costs, cause increased stress or further hinder communication.

Unlike other forms of marine contamination, noise levels in the ocean can be reduced with relatively small interventions. A recent study investigated ways to reduce vessel noise, and suggested adopting a “multi-pronged approach” to mitigate ocean noise.

The study found that when fast-moving, large vessels reduced their speed to 11.8 knots, the emitted noise dropped by three decibels. This reduction is consistent with precautionary “Okeanos” targets supported by the International Maritime Organization to reduce shipping ocean noise by three decibels within a decade. Shipbuilding industries are already retrofitting noisy ships with quieter engines and designing even quieter ones.

Scientists studying the Haro Strait have suggested using a convoy approach to manage the increasing amounts of ship traffic. Incoming ships would be grouped based on their time of arrival and enter the strait together. Ship noise may increase during the convoy period, but its duration is dramatically reduced. The same study suggested designating B.C.’s Salish Sea as a Marine Protected Area (MPA) during the summer months to help the southern resident killer whale population recover.

Both Fisheries and Oceans Canada (DFO) and the U.S. National Oceanic and Atmospheric Administration (NOAA) have implemented regulations to mitigate the stress on the orca population. DFO is working with U.S. agencies to coordinate measures to reduce underwater noise impacts on the southern resident killer whales.

In 2017, DFO published an action plan to aid in the recovery of the southern resident killer whales, including reduction of underwater noise, limiting disturbance from humans, monitoring whales from a safe distance, ensuring accessible food supply and protecting critical habitat. Recovery plans are legally required for endangered species listed under the Species at Risk Act (SARA), but have been criticized by conservationists for delays in implementation.

In 2018, the government of Canada imposed restrictions on Chinook salmon harvesting with the hope of increasing their availability for the southern resident killer whales.

Washington State Gov. Jay Inslee also launched a task force to create a long-term plan for the recovery and future sustainability of the southern resident killer whales. The recommendations ranged from increasing Chinook salmon availability to a temporary whale-watching moratorium, but they remain a long way from being implemented. 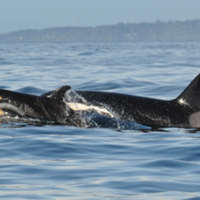 Whale-watching boats and commercial ships are facing an increased number of regulations on how close they can get to orcas in the Salish Sea. As of July 2018, vessels must stay 200 metres away to help limit disturbance of the whales. And in August, Canada’s Federal Court of Appeal rejected the proposed Trans Mountain pipeline expansion, which could result in a seven-fold increase in tanker traffic in the Salish Sea, to 35 vessels a month.

While addressing noise reductions alone is unlikely to be sufficient, it is a necessary first step. The delay in implementation of measures combined with the uncertainty of the effectiveness of implemented measures can make the prospects seem grim for this declining orca population.

However, it is important not to lose hope. There have been recent reports that three females in the southern resident killer whale population are pregnant.

With increased awareness, further action and a $167.4 million investment towards the protection and recovery of endangered whales by the federal government, maybe it’s not too late to save the southern resident killer whales.