The group that turned out dozens of people to Vancouver city hall this month to protest a B.C. government tax on homes worth more than $3 million claims to represent “the little guy” in a fight against “powerful politicians.”

Yet the four directors of StepUP include mining and fossil fuel executives, a prominent restaurateur and a corporate event planner with 15 years experience as a senior investment advisor.

StepUP’s leaders have also donated tens of thousands of dollars to the BC Liberals, called the NDP government “oppressive” and worked with a communications firm that’s done campaigns for the B.C. Lottery Corp. and Kinder Morgan, according to a report from veteran journalist Bob Mackin on The Breaker.

“I don’t know what this notion of the ‘little guy’ living in a $3-million house is all about,” said Margot Young, a UBC professor who helped lead the Housing Justice Project and lives in a home that is subject to the “school tax” on high-priced homes. “I think there’s a small but very vocal group of opponents to the tax, and as is typical with the well-heeled, their voices register more loudly.”

On Dec. 12, protesters flooded Vancouver City Hall for a hearing on whether the city should make a statement opposing the tax. Opponents carried signs reading “We have no more to give” and “No to unfair homeowner tax.”

“The group, organized by community organization StepUP, pointed out that this school tax surcharge unfairly targets a specific group of Vancouver homeowners,” read a press release entitled “Strength in numbers” issued by StepUP. “Nearly 22,000 Vancouver homes are impacted by this tax, more than any other municipality in the province.”

City councillors ended up voting seven to three in favour of a motion asking the B.C. government to rescind the tax. Four NPA councillors and three Greens supported the motion, while COPE’s Jean Swanson, OneCity’s Christine Boyle and Mayor Kennedy Stewart opposed it.

StepUP said it was “pleased” with the vote and told The Tyee in an email that in the coming weeks and months “we will continue to advocate on behalf of taxpayers to have this surcharge repealed.”

Though the council motion is largely symbolic and likely won’t affect implementation of the tax, Young said she is “gobstruck” by people living in multimillion dollar homes who argue that a policy meant to redistribute unearned housing wealth is “unfair” and “discriminatory.”

“I’m stumbling for words because it seems so obviously to be about class greed, quite frankly, opposition to this tax,” she said. “I just find it disgraceful that there would be this kind of protest from people who are sitting on property worth that much in a city where there is such extreme housing insecurity.”

StepUP presents itself as a grassroots effort supported by “concerned citizens.”

“Our supporters are families, homeowners, small business owners, long-time residents, new arrivals, seniors, students — a cross-section of British Columbians who are committed to improving the quality of life for all citizens, not just a select few,” the group explained to The Tyee.

Yet the group’s four board members are anything but ordinary. Bryan Edgar is the director of four oil, gas and mining companies. “To say Edgar is steeped in the culture of downtown Vancouver’s tightly knit business community would be an understatement,” Business in Vancouver wrote in 2012.

Edgar has given $21,470 in donations to the BC Liberals, according to Mackin’s reporting.

Bud Kanke, another StepUP director who started the restaurants Joe Fortes, The Cannery and The Fish House, has given $8,500 to the BC Liberals.

Lana Pulver, meanwhile, is a former senior investment advisor, an author of two books on financial literacy and the founder of an event planning company called Eventzz.

Jonathan Rubenstein is the chair of MAG Silver, a mining company based in Vancouver. He told The Breaker in early December that “the policies of the NDP government are oppressive, and counterproductive and, most of all, divisive.”

“It is where the divisiveness started,” Bligh said.

“In fact, quite the opposite is true,” councillor Boyle replied in an op-ed for The Star Vancouver. “It’s growing inequality that is causing deep divisions in Vancouver. And if we are genuinely concerned about the future and livelihood of all residents of this city, we must begin by decreasing our troubling wealth gap.”

More than 62 per cent of B.C.’s real estate value is controlled by the richest one-fifth of the population. “Huge windfalls of land wealth we’ve seen in parts of B.C. recently have flowed largely to the affluent,” wrote Alex Hemingway, an economist and analyst with the Canadian Centre for Policy Alternative’s BC office.

The land value alone of single-family properties in Vancouver increased by $47 billion in 2016. This has led Hemingway and others to conclude “the housing affordability crisis we face in B.C. is also an inequality crisis — another manifestation of the growing gap between the rich and the rest of us.”

Boyle acknowledged that inequality is growing in major cities across North American and the world. 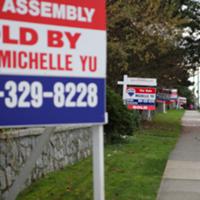 How BC’s Soaring Real Estate Prices Made the Rich Richer

“Vancouver is a microcosm,” she told The Tyee. “So we can’t solve that on our own, but we can do our part in redistributing where wealth is pooling and being generated, so that more people have an opportunity to thrive.”

Polling from Research Co. suggests a majority of British Columbians, including among BC Liberal supporters, are in favour of the school tax and other provincial policies that attempt to solve the housing crisis. (A poll commissioned by StepUP found people aren’t thrilled about extending taxes to homes in the $1-million range).

Boyle shrugged off the criticism.

“I think what we heard at council wasn’t a representative voice of the whole city,” she said. “It was those who were being impacted, who were being asked to pay and who didn’t want to.”