I have a confession to make…

My name might be Christopher, but I worry about being a Columbus!

I report on multicultural Vancouver, which is by no means a “dark continent” or “no man’s land.” But we journalists, in service to the “average Canadians” who read us, too often introduce people, places and cultures through the lens of a colonizer.

It’s something I’ve noticed again and again in my career. Recently, I authored an award-winning essay on the topic, but I have more to say.

Why does journalism in Canada tend to either exclude diversity or present it in stereotypical ways?

Open the local paper or tune into a local broadcaster and you’ll often find variations of these tropes: An exotic celebration with dancing and costumes! An immigrant who refuses to respect our most holy official languages! A model minority who achieved the Canadian dream because of how hard they toiled!

The white gaze is at work.

We live in a country with Anglo colonial roots, and our most spoken official language is English. Is it really a surprise that our news media takes a white perspective when reporting on “ethnic communities”?

Even the term “ethnic” is a product of the white gaze, assuming that being white is the baseline by which all other people and cultures are measured.

So I’ve put together this new pop-up newsletter to investigate the white gaze at work in our media, and its power to shape our perceptions. I’m not white, but I also often internalize the white gaze.

This is our first Tyee newsletter authored exclusively by an in-house writer — me! It’ll offer a peek at the agonies and decision-making that go into my work reporting stories that accurately introduce readers to their neighbours of different backgrounds.

The newsletter is free and will be sent out weekly starting Oct. 20 until the end of the year. You can sign up to receive it right here.

Tired of immigrant neighbourhoods being neglected until a craft brewery moves in? Tired of ethnocultural groups being ignored outside of obligatory heritage months? Tired of diasporas treated as one-note, as if they’re elves and dwarves?

I hope you’ll join this journey as I uncover how the white gaze distorts journalism.

What to expect in the weeks ahead?

How “minorities” always make the news for the same reasons. How “foreign” cultures are introduced as if they’re novel discoveries. How journalists can check their biases and use them as strengths.

Vancouver will be our classroom, so we’ll even take a field trip to Burnaby’s Metrotown mall! (Dairy Queen not included.) And of course we’ll dive into what the “white gaze” even means. 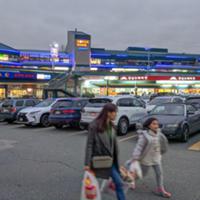 To be clear: This newsletter is not a mere rallying cry for English Canadian publications to throw an “ethnic” person up on their front page and call it a day.

We’ll be going deeper, examining how our media advances a Canadian brand of sugary multiculturalism that can be as exclusive as it is inclusive. It’s heavy stuff, and we’re all part of it in one way or another.

At the end of it, I hope you’ll be able to spot how the white gaze shapes how we all view our communities, and how journalists can strive for more representative reporting that encourages equality.

Want to know more? I’ll be joining The Tyee’s social media manager Sarah Krichel on Oct. 20 at 1 p.m. PDT for a chat on Instagram Live about this newsletter and the white gaze.

Got questions? You can reach me during the newsletter’s run at underthewhitegaze@thetyee.ca.

I hope you’ll tag along as I try to break the curse of Columbus.