The Canadian Association of Journalists has nominated Jamin Mike for a national award.

Mike has been selected as a finalist for the JHR/CAJ Emerging Indigenous Journalist Award, for outstanding reporting done during his three-month reporting fellowship at The Tyee last year.

Our newsroom has hosted two other such reporters through a partnership with Journalists for Human Rights that includes additional funding support provided by an anonymous donor from a first-generation Chinese-Canadian family in Vancouver.

Mike said he is shocked by the nomination, considering how new he is to journalism writing.

“Being nominated for an emerging Indigenous reporter award is something that I will carry for the rest of my life,” he said. “I definitely feel inspired to continue writing and honing the best of my storytelling abilities. I sometimes feel undeserving of such a nomination, but I do feel that my years studying and practicing to do this are beginning to work out for the better.”

Starting the fellowship at an interesting and fast-paced time in the year — the eve of the 2019 federal election — Mike dove right in.

He talked to Indigenous youth weighing the tough decision of whether to vote in the election, covered the ongoing water crisis on First Nations reserves and spent election night reporting from Jody Wilson-Raybould’s campaign. 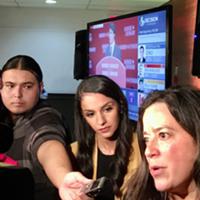 ‘Look for the People in the Corners’: Journalist Jamin Mike

“Without this partnership with JHR, we wouldn’t have met Jamin. And that would’ve been a huge loss to The Tyee. Jamin in the best kind of storyteller — dedicated, careful, wise and just wonderful to be around. He’s totally deserving of this nomination, and we’re very proud of him.”

Mike grew up in the Beardy’s & Okemasis’ Cree Nation, where he had his first journalism gig at the community radio station. He then pursued the journalism-intensive Indigenous communication arts diploma at the First Nations University of Canada and his bachelor of arts in English literature and history at the University of Regina.

Mike expressed gratitude to his professors at First Nations University for their support.