When we think of climate change, we don’t think enough about oceans.

That was the core of the debate last week as leading Canadian and French thinkers on climate change and oceans came together in Vancouver to agree on one thing: the role of the planet’s oceans is one of the most significant and overlooked dimensions of the climate change conversation.

“Even the deepest parts of the ocean are connected to the surface, connected to the atmosphere,” said Kim Juniper, professor in the School of Earth and Ocean Sciences and the department of biology at the University of Victoria.

The French Ameri-Can Climate Talks on Ocean, hosted at the University of British Columbia’s Beaty Biodiversity Museum for the public, was the latest event in a program launched in 2014 by French embassies in Canada and the U.S. to encourage public engagement and mobilization post-COP 21 (the 2015 United Nations climate change conference). The event included a panel of five experts who paid particular attention to the explicit inclusion of oceans for the first time at COP 21 and in the preamble to the Paris Agreement on climate change.

Oceans are finally receiving the attention they need and deserve in international discussions of climate change, said Loreley Picourt, head of initiatives at the Ocean & Climate Initiatives Alliance, who had recently returned from COP 23 in Bonn, Germany. “It took 21 COPs, so 21 years. We’re very happy to call COP 23 the blue COP,” she said.

The discussion touched on a range of environmental and oceanic topics, revealing the astonishing breadth of effort involved in fully addressing these issues. Human impacts on oceans are difficult to measure, but certain disturbing trends are becoming clear. Juniper and his fellow researchers recently discovered microplastics in the digestive tracts of marine animals living 10,000 feet below the surface. To put that in perspective, this means human trash is making it to parts of the planet that haven’t even been fully mapped.

William Cheung, associate professor at UBC’s Institute for the Oceans and Fisheries, warned of the largely invisible impacts of climate change on oceans, which absorb and retain much of the world’s carbon emissions. The three central concerns he mentioned were ocean warming, deoxygenation and acidification, all of which impact biodiversity by transforming aquatic habitats; entire fish species are now migrating up to hundreds of kilometres to adjust.

Many of these changes mean humanity must also adapt, the message is that it’s essential to change our behaviour while still working to live in the world as it is. Oceans may seem like the vast beyond, but we absolutely rely on them and need to understand how best to interact with them.

“Our main interaction with the ocean, still, is fishing,” said Daniel Pauly, the principal investigator with Sea Around Us at UBC who has worked to correct international estimates of yearly fish catches to better understand and plan for overfishing. “We have to know the productive capacity of the ocean to understand how to protect its biodiversity.”

Pauly cautioned that fishing is unlike other forms of agriculture. While conventional agricultural wisdom said “the more you put in, the more you get out,” that logic only holds for a short while in fisheries — the more you fish, the more you deplete fish stocks. Eventually you can’t help but catch less.

“We can rebuild the stocks that have been overfished,” said Pauly. But that means reducing the amount of fishing, and finding an equilibrium with wild fish populations. In short, it means allowing them to replenish themselves at a rate that supports us. “We still would not feed all people all the time,” he said, “but we could have more fish now.”

Fisheries represent just one dimension of the climate and oceans problem. Coastal regions and islands are at an obvious risk of flooding, a threat which has already begun to affect many communities worldwide. Picourt brought up the problem of “climate refugees,” a designation she admitted lacked a clear definition as there is a lack of any framework for dealing with and helping these populations.

The elephant in the room was undoubtedly the U.S.’s recent moves to back out of the Paris Agreement. But with the U.S. (officially) out of the discussion, a leadership vacuum allows countries like Canada and France to form alliances and help shape the conversation going forward. Not to mention efforts by such heavy hitters as the state of California or former mayor of New York Michael Bloomberg as forces to make good on the country’s prior commitments. 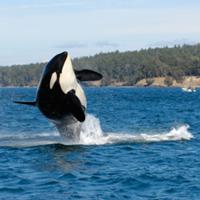 Our Southern Resident Orcas are Headed for Extinction

But the panelists agreed a huge amount of political will is necessary to ensure proper, timely action is taken. Before the conference, Laura Lallier, a maritime lawyer in France, spoke about her country’s public consultations before approving resource exploitation projects. Consultations are a great measure, she said, but oceans are of little concern to the public. “Not because they don’t care, but because they’re not aware.”

An ocean is a vast and international space that doesn’t necessarily invite the same passion as other environmental concerns. “The ocean is just as or more important than pandas,” said Lallier, but, “from a law and policy perspective, the ocean is still a bit marginal.”

“It has to be an international effort because the ocean doesn’t belong to anyone but provides services to absolutely everyone,” said Picourt. “We all depend on the ocean.”

Pauly agreed that oceans require an international effort with the public’s support and interest. But all of that has to be in service to pushing action at the level of policy. Eating sustainable fish or avoiding plastic grocery bags on an individual level might help, but it won’t tip the scales, he said. The public must use its influence to get governments on board.