Everybody hates a freeloader.

This is a universal law of human nature.

So while it’s true evidence suggests “vaccine passports” would be more effective at getting vaccination-hesitant Albertans to do the right thing than Premier Jason Kenney’s scheme to give $100 gift cards to dim-witted holdouts if they agree to get a jab, that’s not why the idea was instantly and universally loathed. It’s also likely not because it’ll cost about $20 million.

It’s because good citizens who did the right thing and stepped up to be vaccinated will get bupkes.

There is a fury in the land!

The premier, Health Minister Tyler Shandro and chief medical officer of health Deena Hinshaw had all been harshly criticized for disappearing from view for weeks while the COVID-19 Delta variant burned its way through the province after they’d defied conventional wisdom and opened the place up in July.

So we all knew something foolish was probably coming down the pike when we got word they’d scheduled a Friday news conference, dragging Alberta Health Services CEO Verna Yiu along to lend a little credibility to their effort. (Yes, Yiu confirmed, Alberta’s ICUs are now almost at capacity.)

Kenney and his United Conservative Party government, after all, have a track record for bad ideas.

Who would have guessed, though, they’d come up with something that provoked such atavistic revulsion? One would have thought even Canada’s most tone-deaf premier would have understood this. Apparently not.

To everyone who goes to get their shot to cash in on $100 because that was enough reason to convince you, but not the health of my two unvaccinated kids: fuck you.

When Kenney dropped his big idea a few minutes into the news conference — which with characteristic contempt for his audience began about 20 minutes late — it was almost as if there was a provincewide gasp of astonishment.

Within seconds, the Twittersphere exploded. Everybody hated it. Even Kenney’s friends.

Worse, from the premier’s perspective, it was widely and hilariously mocked.

Ralph Bucks were a bad idea too, but since we all got the money, it didn’t violate a fundamental taboo.

So the unvaccianted are putting our health care system at risk. And the answer is to financially reward them.

Kenney Pennies seem to have offended everyone, even Kenney’s journalistic cheerleading squad at Postmedia.

Political columnist Don Braid called it “a panicky bribe for the undeserving.” His column set the tone for what followed the initial hostile reviews.

Licia Corbella called it a “vaccine bribery scheme.” A “gobsmacked” Rick Bell ripped the premier a new one during the news conference’s Q&A session for reporters. “Do you realize,” he asked the premier, “what kind of a message this is going to send to the seven out of 10 Albertans who have gone out and got fully immunized?”

“I wish we didn’t have to do this,” a defensive Kenney retorted shoutily. “But this is not a time for moral judgment!”

Yes it is, said an entire province.

I find it rather sad that we live in a country where we feel the need to REWARD people for getting vaxxed. People all over the planet are scrambling to even find a vaccination. GET VACCINATED. #scienceforthewin

“I’m much more concerned about protecting our hospitals than I am about some abstract message this sends,” Kenney huffed at about 43 minutes into the hour-long news conference.

That was the moment, I think, when he lost Alberta.

History may well show it was the moment the United Conservative Party began to take on water. If you hear music, it’s only the orchestra playing “Nearer My God, to Thee.”

“We have left no stone unturned and yet we have the lowest vaccination rate in Canada,” Kenney, having lost his audience, whinged. 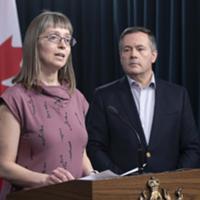 Of course, he left a very large stone unturned: Vaccine passports. Most of the province wants them and most experts say they work.

CTV reporter Bill Fortier raised that point, asking Hinshaw what her professional view was about “whether or not Alberta should bring in a proof-of-vaccine program like B.C., Ontario, Quebec and Manitoba?” 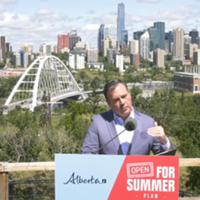 Possible translation: Of course we should bring in vaccine passports. They work! But the cavemen in the UCP caucus, steeped in culture war ideology, will not abide it. And they’re the particular population that counts around here.

No wonder he hates vaccine passports. They are 4X more popular than him. https://t.co/QyKSbSmgH8

This, Dear Readers, is why you have focus groups.

If the UCP strategic brain trust had focus-grouped this idea, it never would have seen the light of day.

Too late now. Always the smartest man in the room, Kenney knew better.