Polarization and partisanship are driving discussions on migration. Ever since U.S. President Donald Trump implemented a series of travel bans from mainly Muslim-majority countries, more asylum seekers have been seeking safe haven at Canada’s door. Our nation has been in a heated debate over who should be allowed into our country, how many people should be allowed in, and how we should treat them once they arrive.

As the federal election approaches Oct. 21, let’s delve into the migration platforms of the four main parties. What have the parties promised, what have they said, and what have they done in the past? Which party plans to raise or lower target numbers for immigration? Which party wants to abolish, suspend or expand the Safe Third Country Agreement? Will any party stop indefinite immigration detention?

Arguably the most contentious migration issue this election is the Safe Third Country Agreement, or STCA. The STCA is an agreement between the U.S. and Canada that allows Canada to bar migrants coming from the U.S. (and vice versa) from making refugee claims at official ports of entry.

The STCA is based on the premise that both countries provide equal options for migrants, though this has been highly disputed and legally challenged multiple times. This bilateral agreement has generated much debate in the last few years. Migrants have increasingly been coming from, or through, the U.S. to seek asylum in Canada, but because of the STCA, they’ve taken dangerous routes to avoid official ports of entry.

Conservative party leader Andrew Scheer has said his party would renegotiate the STCA and put an end to “illegal” border crossings at unofficial points of entry. The Conservatives also say they will “close the loophole in the Safe Third Country Agreement that allows some people to skip the line and avoid the queue,” signalling that they plan to designate the entire border as an official port of entry, completely barring migration to those coming from or through the U.S. Exactly how this would be accomplished is unknown, as the Conservatives’ immigration plan provides no specific details and there have been critiques of the feasibility of a similar plan from the Liberals.

The Liberals have resisted many calls to suspend the STCA, saying the system works well and that the agreement should be kept as is. That said, past actions indicate the party wants to tighten the border. In July 2018, the Liberal government appointed Bill Blair as minister of border security, and he wants to expand the STCA. In July, the Liberal government imposed an ineligibility rule at the border that blocks asylum seekers from making a refugee claim in Canada if they’ve previously made a claim in another country. The Liberals pledged $1.2 billion in their 2019 budget for the Immigration and Refugee Board and the Canada Border Services Agency, aiming to speed up refugee processing and improve border security. The Liberals also propose to amend the Immigration and Refugee Protection Act to “better manage, discourage and prevent irregular migration.”

The NDP wants to suspend the STCA. Party leader Jagmeet Singh has said refugees “are no longer safe under the Trump administration — and we need to do something about it.” The NDP says suspending the STCA would promote “safety, security and efficiency” at the border by allowing asylum seekers to make refugee claims at an official border crossing rather than leaving dangerous irregular crossing as their only option.

The Green Party would abolish the STCA. Party leader Elizabeth May has said under Trump the U.S. system for processing refugees is in “disarray,” and the STCA diminishes the rights of asylum seekers in Canada. “Canada needs to step up to the plate and accept that many of these people are fleeing persecution and/or disaster for the second time,” says May on the Green Party website. “We need to allow them to go through the same processing as refugees would if they were to present at regular points of entry, not add to their suffering.”

Immigration levels have increased under the Liberals: 321,045 permanent residents were admitted to Canada in 2018, and the Liberals hope to bring that number to 350,000 by 2021 while focusing on highly skilled immigrants. The vast majority of newcomers would come under economic programs designed to address skills gaps in the labour market. The Liberals plan to establish a municipal nominee program, which would allow communities, chambers of commerce, and local labour councils to sponsor immigrants directly into their communities. The Liberals would also make permanent the government’s Atlantic immigration pilot. Immigration has been a priority of the Liberals, and during their time in the power they passed Bill C-6, an act amending Canada’s Citizenship Act, which made several migration-friendly changes. Lastly, the Liberals have committed to eliminating the citizenship application fee, which costs applicants $530 (hiked from $100 by the previous Conservative government) to make citizenship more accessible.

The NDP has not cited the specific number of immigrants it would accept but says it will “Make sure that our immigration policies and levels meet Canada’s labour force needs and recognize people’s experiences, contributions and ties to Canada.” The NDP plans to address the needs of migrant care workers who came to Canada under the promise of being granted permanent residency after two years but could not meet the inflated requirements. The Liberal government created an interim program that allowed care workers to bridge between the two-tier system, but it expired on Oct. 8.

The Green Party has also not shared a target number for immigration. The Greens want to eliminate the Temporary Foreign Workers Program, and instead increase immigration to places in Canada that can’t fill job vacancies. They also want to establish a program to process the 200,000 people in Canada without official status, providing a pathway to permanent residency for those who qualify.

The Green Party would also reintroduce legislation to establish an independent oversight mechanism — the Civilian Complaints and Review Commission — for the Canada Border Services Agency. Legislation on this issue was introduced this year, Bill C-98, but it did not pass the Senate, and many criticized the Liberal government for not introducing the bill “long before the dying days of Parliament.” Critics have long called for independent oversight of the border agency, which has been heavily criticized in the past for acting egregiously and without any accountability.

Lastly, the Green Party wants to amend both the Anti-Terrorism Act and the Public Safety Act to require that, after a reasonable period, formal charges be brought against all those detained in immigration detention centres.

The Conservatives have not shared in their platform a target for the number of refugees they would accept and resettle to Canada, but the party has stressed that it would promote the private sponsorship of refugees. It also says it would increase refugee screening and would prioritize accepting only refugees facing “true persecution.” 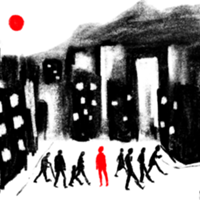 ‘Undone: A Newcomer’s Story’ Had a Tragic End. We Asked How Things Could Have Been Different

Under the Liberal government, Canada became the global leader in refugee resettlement, welcoming approximately 133,000 refugees between 2016 and 2019. The government attracted international recognition when it resettled 40,000 Syrian refugees. That same year, the Liberals quietly capped the Private Sponsorship of Refugees Program, limiting the number of refugees that Canadian citizens — who were footing the bills themselves — could bring to Canada. The Liberals capped new private sponsorship applications at 1,000 — down from 13,500 — in an attempt to address the backlogs. The Liberals have not shared a target number for refugee sponsorship or refugee resettlement in their platform, but they plan to introduce a refugee stream for at-risk human rights advocates, journalists and humanitarian workers, resettling 250 people a year.

The NDP has not shared any concrete information about refugee sponsorship or resettlement targets. It has stressed the need to tackle applicant backlogs and prioritize family reunification by ending the cap on applications to sponsor parents and grandparents.

The Green Party has also withheld specific numbers for refugee sponsorship and resettlement. Its platform says it would grant permanent resident status to those who have refused or left military service in a war not sanctioned by the United Nations. Uniquely, the Green Party wants to start a discussion about climate refugees, adding them as a legal category of refugees in Canada.