You, who take pride in your country and are committed to protecting your children and grandchildren. You, who have faith in our innovative capacity. You, who treasure good governance and care about national security. Yeah, you.

I’m afraid it is time to abandon your so-called conservative “leaders.” These deniers who throw temper tantrums when told we need to take urgent action in the face of the climate emergency. These people don’t deserve you, and they don’t hold a candle to the conservative leaders of the Second World War — the last time our nation faced an existential threat.

We have been here before.

In the 1930s, as the fascist powers began their ascendency and territorial acquisitions, initially neither Britain nor Canada made any serious move to oppose them. When Mackenzie King met Hitler on a diplomatic mission in 1937, he privately dismissed him as “no serious danger.” British prime minister Neville Chamberlain was similarly inclined to hope for the best. After the Nazi invasion of Austria in 1938, Chamberlain met with Hitler in Munich, and infamously returned promising “peace in our time.” King was supportive of Chamberlain’s policy of appeasement.

Canada was on the cusp of being completely transformed by its Second World War experience, yet right up to the eleventh hour — the summer of 1939 — King still hoped to avoid being dragged into another European war.

Consider it all an early form of threat denial.

Yet, despite the early reticence of Canada’s leaders, we did declare war in September 1939 and then set about the task of galvanizing public support, marshalling the armed services and completely retooling the economy to meet the production needs of the wartime effort. And in the following five years, we did something extraordinary.

True, our mobilization got off to a slow start. Much of the first year of the Second World War has been dubbed by historians as the “Phoney War.” No immediate battlefront emerged. There was not much actual fighting. Everyone knew it was coming, but much preparing and training was still needed. As the Nazis took control of more and more countries — Norway, Denmark, Holland, Belgium and then France — the Allies observed a level of German capacity that caught them off-guard. Leadership in Britain seemed rudderless, until a coup within the Conservative party forced out Chamberlain and replaced him with Winston Churchill in the spring of 1940, a leader ready to rise to the challenge.

As with the Second World War, our Phoney War on climate change is about to end.

Lest we forget, it was not at all obvious to people at the time that the Allies would eventually defeat the Axis powers. For much of the war’s early years the outcome was far from a foregone conclusion. We know in hindsight how this story ended; they did not.

Similarly, we live today in an ambiguous time. We don’t know if we will win the climate fight, or that we will meaningfully act in time. But like those who sought to defeat fascism in the Second World War, we have to rally to the cause regardless.

When urged to take climate action, there is a tendency for Canadians to say, “But we are only a small population, and our efforts don’t matter.” This feels particularly true when the U.S. under Trump seems to be moving in the opposite direction. But here, too, the war analogy is apt; after all, when it came time to finally confront Nazism, Canada did not wait until the U.S. finally joined the war effort in late 1941 — we threw ourselves into the fight two years earlier.

Canada was just a small country of 11.5 million people at the start of the Second World War. Yet, by war’s end, no one doubted the import of either our military or economic contributions. Remarkably, over one million men and women — one in 11 — enlisted for the war effort.

And the scale of Canada’s wartime production was nothing short of stunning, all the more so because most of the production capacity had to be built from scratch. Between 1939 and 1945, Canada produced:

The Canadian government, under the leadership of C.D. Howe (dubbed “Minister of Everything”), established 28 Crown corporations during the war, with the aim of meeting the supply and munitions needs of the war effort.

As historian Jack Granatstein wrote in a 2005 paper for the Canadian Council of Chief Executives: “This was an astonishing feat of production and organization, a massive effort by every sector of the Canadian economy and by Canadian workers and business leaders. Canadians won the economic war, and their efforts from 1939 to 1945 also ensured that the postwar years would be very different than the bleak decade that had preceded the war.”

Yet today’s Conservative “leaders” say we can’t transition our economy to meet the greatest existential threat of our time. Where is the courage and imagination of their predecessors?

While the threat today may move in slower motion than war, the climate crisis we face isn’t really all that different. Only now, we need governments that can lead us not into battle against other nations, but rather, into the fight for our collective future.

Today’s extreme weather events — the floods, fires, forest epidemics and hurricanes — are attacks on our soil, and they will only get worse. It’s time we adopted a wartime-scale response to confront this emergency.

In the economic and societal transition that is now urgently needed to shift our country off fossil fuels, the Conservative Party of Canada has, sadly, taken itself out of the game. This despite a recent Abacus poll indicating that a majority of conservative voters believe climate change to be a serious problem that represents “a major threat to the future of our children and grandchildren.”

There was a time in the not-too-distant past when the former Progressive Conservative party could legitimately claim to have climate leaders among its top ranks. No more. Today’s Conservatives have chosen to opportunistically campaign against genuine climate policies, and to conspire with those who would block real action. They are scoundrels who would put your children at risk for electoral gain. 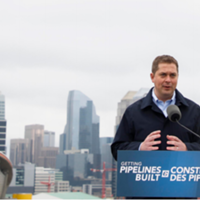 Upon the release of the Conservatives so-called “climate plan” in advance of this federal election, the National Post’s Andrew Coyne described it as “a prop” rather than a plan — “a work, essentially, of mischief — an intentionally pointless bit of misdirection.” The Globe and Mail’s Gary Mason described the plan as “a sad joke.” As many noted, the Conservatives offered no estimates of how much greenhouse gases would actually be reduced as a result of any of the policies promised (few as they were). Perhaps with good reason. Leading environmental economist and emissions modeller Marc Jaccard predicted the Conservative plan would actually result in an increase in greenhouse gas emissions.

When crises, such as a war, call for real plans, we see clear actions and timelines and expected outcomes. Conservative leader Andrew Scheer’s climate document contains no such thing.

Your grandparents’ Conservative leaders, in the face of an ominous existential threat, rallied us and declared, “We can do this!”

In the face of today’s clear and present emergency, these man-baby Conservative leaders whine, “Don’t make me do it!”

You’re better than them.