Scheer’s “A Real Plan to Protect Our Environment” was served up to counter criticism that the party had no climate plan.

Instead, it proved the critics right.

Scheer celebrated the report in an oddly Trumpian way. “Sixty pages! 11,000 words!” he said at the launch, as if all those empty words showed how serious the Conservatives were about climate change.

The plan was really 33 large pages. And 16 of them were taken up with big photos of Scheer. Looking at corn, looking at carrots, holding a crab, throwing a rock into a lake.

In those 11,000 words, there isn’t one mention of the effects of climate change. There are a lot of attacks on the Liberals, a pledge to respect hunters and fight invasive species, and photos of a Canada goose and polar bear. But no mention of urgency or crisis. (Unsurprising, as the Conservatives in fact voted against this month’s motion to declare a climate emergency.)

The document is an expensive collection of words and photos that suggest Scheer’s advisors thought he needed to pretend to have a climate policy. It’s an insult to anyone who believes the climate crisis is real, or even anyone who expects some honesty from political leaders.

And it’s certainly not a plan to address global warming.

A plan has actions and timelines. It has annual outcomes — the expected results — so people can decide if it’s worthwhile and working.

Scheer’s document has none of those. There is not one specific commitment to reduce emissions, no targets. He acknowledges the 2015 Paris Agreement, and says "The Paris targets are Conservative targets." But he offers no serious plan to meet them.*

Under the non-binding agreement, Canada committed to reducing carbon emissions to 30 per cent below the 2005 level by 2030.

Emissions were 732 megatonnes in 2005. So they need to be cut to 512 megatonnes by 2030 to meet the target (and help reduce the devastating impact of global warming).

So, what would the Conservatives do? Aside from killing the carbon tax, of course, a proven tool for reducing emissions.

A Conservative government would set emission caps for companies producing more than 40 kilotonnes of carbon dioxide emissions. If they go over, they would have to “invest in research, development, and adoption of emissions-reducing technology related to their industry.” The limit would capture about 500 operations that would be required to invest a set amount for every tonne of greenhouse gas they emit above the cap.

It’s like a carbon tax, with the added goal of ineffectuality.

Remember, the emissions limits would be set by government. The Conservatives champion the oil sands, complain about regulatory and tax burden on industry, and aren’t much worried about climate change. There’s no reason to believe they will take a stringent approach.

Government would also decide on the amount that must be invested per tonne of emissions, and the rules. Companies could invest in their own subsidiaries working on emissions-reducing technology or upgrade their operations. The money could easily end up spent on cost-saving changes they would have made anyway.

So, how much will the key element of Scheer’s plan reduce emissions?

The Conservatives don’t say, probably wisely. Any reductions seem minor, and too late to make any difference in reaching the Paris Agreement commitments.

Scheer’s plan also pledged to bring back, for two years, a Harper-era program that provided tax credits for homeowners who did energy-saving renovations. They would get a 20-per-cent income tax credit for home improvements up to $20,000. The subsidy would cost $900 million a year, Scheer said.

So, assume an average credit of $2,000, and Scheer proposes to subsidize renos for 900,000 households. And assume they cut their carbon emissions in half.

There are 14 million households in Canada, responsible for 41 megatonnes of carbon emissions. That’s an average 2.9 tonnes per household.

Scheer proposes to spend $1.8 billion to subsidize renos for 900,000 of them. If they cut their emissions by 50 per cent, overall emissions from households will fall by 1.3 megatonnes — about 3.2 per cent of current household emissions. (Remember, Canada needs cuts of 192 megatonnes to meet its Paris commitment.)

The document includes a promise of Green Patent Credit tax breaks for companies to encourage innovation in reducing emissions. The Scheer platform says it’s modelled on the U.K.’s “patents box” program, which slashes taxes for companies that earn revenues from patented technology.

Critics have said that program — emulated in other countries — has been widely abused. “Supposed to entice entrepreneurs with a 10-per-cent tax rate on any patented product, all it brought was enterprising tax lawyers applying the 10-per-cent tax to anything that had even a tiny part with a patent inside it,” wrote Polly Toynbee in the Guardian.

And while Scheer’s plan quantifies the cost of the corporate tax breaks — $20 million a year initially, rising to $40 million within four years — there are no forecasts of emissions reductions. Again, that’s likely because there will be no significant impact.

Scheer also promises a $250-million Green Technology and Innovation Fund to support companies having trouble raising money from investors. He says the program is based on the Harper government’s Venture Capital Action Plan. Industry liked the program; the Auditor General found there was too little information to know if it was effective.

And again, it’s impossible to know if there will be any reduction in emissions as a result of the spending.

“Wealthy countries with good environment practices, like Canada, are forced to subject themselves to expensive emissions reduction strategies,” it complains.

Instead, Canada should be able to increase carbon emissions, Scheer says, if we can claim to be helping other countries cut back. So, for example, if Rio Tinto’s emissions from producing aluminum in Kitimat rise, that shouldn’t be counted because the aluminum might have been made in another country with even higher emissions per tonne produced. Increasing oil sands production and emissions might reduce coal use in China.

But the document offers no ideas on how we’d establish that there were in fact overall reductions in emissions. Will oil sands bitumen displace coal, or simply result in increasing energy use and still higher emissions in China, for example?

What’s going on here? One explanation would be that Scheer simply doesn’t know what a proper business plan looks like. He’s been a career politician since he was 24. His limited-to-non-existent private sector experience was summed in a business magazine profile referring to his time in Regina before he was first elected.

“It was here where he took a job waiting tables at Danbry’s restaurant and even tried a hand at selling insurance in a friend’s company,” the article noted.

An Angus Reid poll released this month found climate change/environment was the top issue for Canadians, identified by 40 per cent of people. It topped the list for Liberal, NDP, Green and Bloc Quebecois voters. 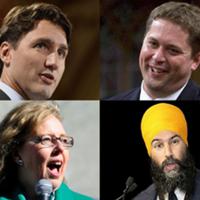 But only eight per cent of Conservative voters identified it as an important issue; it ranked ninth among their concerns. (Only income inequality was rated a lesser concern.)

So doing anything real on climate change would irk the Conservatives’ base.

But admitting the Conservatives don’t want to take action on the issue would damage the party’s prospects with the larger number of voters who consider it a threat to our future.

The solution is Scheer’s “Real Plan to Protect Our Environment,” which avoids any real commitments while trying to give the appearance of a climate policy.

It’s an approach that’s cynical and dishonest. If we fall for it — or even tolerate it — we’re allowing political life to be further debased.

And we’re setting the stage for climate disaster for our children and grandchildren.

*Story updated at 11:27 a.m. on June 28 to correct the claim that the Harper government signed the 2015 Paris agreement. It did not.