How rinky-dink can the National Energy Board get?

With its so-called “reconsideration report” on the Trans Mountain pipeline expansion, the board has plunged into the shallows once again.

After a federal court struck down the project’s original approval because it failed to consider the impacts of increased tanker traffic or consult meaningfully with First Nations, the board pretended to revisit these issues in 155 days.

In so doing they conducted another flawed paper exercise that will be challenged in the courts again.

But this time around the board did admit that the pipeline and associated tanker traffic could devastate orcas, threaten the marine economy with the risk of oil spills and erode Indigenous cultural practices on the coast.

But hey, the benefits are so worth it, the NEB concluded.

And how did the board calculate the benefits?

The Canadian government, which now owns the 65-year-old pipeline, simply dug up the same 2015 Muse Stancil report commissioned by Kinder Morgan to justify the pipeline four years ago.

How’s that for a new standard of laziness?

And what assumptions did the outdated report make?

Well, Muse Stancil said Canada stood to make billions provided that oil prices would be above $100; assumed the Canadian dollar would be on par with the U.S. greenback; that other pipelines would not be built; that increased supply will win higher prices in Asia; and that all bitumen is subject to a North American discount — when in fact only a third is subject to such pricing.

None of these assumptions hold any water today.

Oil prices have slumped and entered a whole new era of volatility. At the same time the Canadian dollar keeps treading water.

“The disconnect is huge,” says economist Robyn Allan. “The board has now underestimated marine risks just to approve a project whose economic benefits don’t exist.”

“And they approved a $5-billion project based on the 2015 calculations when in fact the project will likely cost closer to $10 billion. They are denying the facts, the truth and the science.”

Can oil shippers afford to pay higher tolls to cover the cost of a $10-billion pipeline, or will taxpayers now subsidize those higher toll costs? asks Allan.

And that’s the question the NEB and the federal government would prefer not to discuss in public.

By refusing to take a fresh look at the economic data and changing global oil markets, the NEB is misleading Canadians who own the pipeline.

David Hughes, Canada’s leading energy analyst and a former researcher for National Resources Canada, says he is scratching his head at the report.

All the NEB has to do is look at current oil prices to see the claim Asian markets will pay higher prices for oil sands crude is “just bogus,” he said. “The premium market for heavy oil is the U.S. Gulf Coast, and not in Asia.”

Thanks to declining production in Venezuela and Mexico, the price for Mexican heavy oil, a product similar to Canada’s heavy crude, was trading even higher there recently than typically higher-priced West Texas Intermediate, said Hughes.

One wonders if the NEB ever thought to include the results of the recent IHS Markit report on heavy oil markets.

As global heavy oil supplies have declined due to political chaos in Venezuela and other developments, Canada’s best market remains the U.S. Midwest and Gulf Coast where complex refineries exist to handle heavy oil, it found. “Lacking alternative markets, growing heavy oil supply from Canada has taken on an increasing role in meeting U.S. demand,” noted the report.

And why would NEB ignore economic developments in China?

Its ravenous industrial economy has made it the largest importer of oil, but that economy is now dramatically slowing.

China already imports a lot of heavy oil from Russia and Venezuela. As one analyst recently noted, “Unless replaced by cleaner sources of energy, these imports of contaminating oil will impact negatively [Chinese President] Xi’s 2035 environmental goals.”

And what about the effect of exporting these dirty fuels on Canada’s ability to reach its climate goals?

The board also apparently didn’t look at the latest oil sands report from GlobalData.

It warned that oil sands “processes are energy intensive, consume large volumes of water and result in emission of greenhouse gases in high volumes,” and that many financial service companies such as Equinor and HSBC will no longer fund such projects. 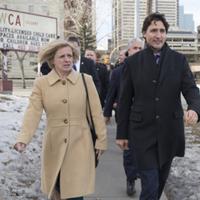 “Considering the overall complexity of the oil sands extraction process, global prices for crude oil will have to remain at comparatively higher levels to ensure profitability from oil sands projects,” it warned.

And how is that supposed to happen in a world loosely committed to lessening oil demand?

The warnings from the GlobalData report might explain why Devon Energy, the fifth largest operator in the oil sands, has just put its assets there up for sale.

Hughes said the idea Canada can get rich through oil sands exports is just not borne out by the data.

Canadian governments collected $16.1 billion in royalties from oil and gas extraction in 2000, but that number had shrunk to $6.6 billion by 2017, according to figures provided by Canadian Association for Petroleum Producers.*

At the same time Canada doubled oil production, largely from the oil sands.

“We doubled production and got $9.5 billion less in royalties,” said Hughes. “We are not getting anything for the resource, and its production is having a huge impact on our GHG [greenhouse gas] emissions.”

And obviously, the Canadian government and its servant, the National Energy Board, haven’t got a clue.