Vancouver’s departing council recently voted to rezone over half the city for duplexes. While ostensibly a move to increase affordability, even proponents admitted that duplex homes, likely to be sold for $1.5 million, would only be affordable to Vancouver’s top 10 per cent of wage earners.

This is marginally better than the existing situation (which restricts the parcel and structures to one owner, not two) with a current price tag often in the $3-million range and affordable to only the top five per cent of wage earners.

While some benefit is better than no benefit (I guess), it strikes me as pitifully small consolation. Particularly when there are much better ways to get affordable housing into the 60 per cent of the city zoned residential (technically known as the “RS” zones).

It still seems to me that this change can be largely faulted for both being too little (it won’t make housing affordable) and too much (it was imposed without the neighbourhood-by-neighbourhood consultation that characterized recent changes to Norquay Village, the West End, Marpole, and Grandview Woodlands).

Readers who have stayed with my recent screeds on the land tax, the Vienna model, and the application citywide of the community amenity contribution tax to solve this problem may be relieved to hear that I am nearly out of affordable housing ideas to expound on.

And this one, which tries to show exactly what an affordable structure in the RS zone might look like, backed up with a practical financial plan to build it, will certainly be the last of this election season.

I am fortunate to have pictures of it too, drawn by a man who is eminently qualified to show both how quality residential environments can be preserved and affordable housing can be supplied at the same time: Sean McEwen, architect. McEwen is best known for his widely admired work on the Mole Hill Project where he rehabilitated a row of heritage structures and re-purposed them for mixed income affordable homes.

More recently, and of even greater relevance to our present concerns, is his entry into the Urbanarium-sponsored “Missing Middle” competition. The “Missing Middle” connotes housing forms that inhabit the density zones between “single family” at the lowest level of density (usually about seven housing units per acre) and the tower blocks springing up across our city (usually over 200 per housing units per acre). Obviously there is a very large range of “missing” densities between these two extremes.

Unfortunately, most depictions of the Missing Middle suggest the only thing you can do between these extremes are townhouse and small apartments, two forms that would require “site assembly” (the acquisition of a number of small adjacent parcels, enough so you can build a larger project) as well as the necessary destruction of all existing structures and vegetation previously on site. Obviously this would dramatically alter the look and feel of a neighbourhood, not to mention increase landfill waste.

It is this kind of dramatic change that stiffens the resistance of residents against the Missing Middle proposals found in the city’s “Making Room” density plan, and pits typically older homeowners against house-starved millennials. This generational conflict was on stark display at the recent public hearing on the RS-zone change last week. Almost every speaker under 35 (and there were many) spoke in favour of allowing duplexes, and virtually every speaker over 55 (and there were many more) spoke against.

Sean McEwen’s design proves, I think, that this intergenerational conflict does not have to be. I believe his design ideas show an approach that would greatly appeal to house-poor millennials for its much higher parcel density and also appeal to existing homeowners for its compatibility with existing neighbourhood character, for how it might unlock currently inaccessible home equity capital, and how it might keep both them and their children in the neighbourhood.

How can this be?

McEwen’s proposal starts from an assumption that simply adding density will not lower prices. This is because any change in allowable density is accompanied by a proportionate increase in land cost. So you get higher density, but no drop in per square foot purchase price.

McEwen proposes that increases in density only be granted if some proportion of the new density be permanently assigned for social purpose — in the form of strata units given over to nonprofit housing corporations or some other form of agreement to insure perpetual affordability by working families.

In simplest terms, to cite just one possibility, a purchaser could keep the existing home, or build a new smaller home in place of the original, or build a larger structure to accommodate five or six units in return for granting ownership of two units to a nonprofit. An even more socially beneficial possibility might be one where an owner in, say, Dunbar would like to downsize and also is sad that the kids and grandkids can no longer afford to live in Vancouver.

That owner might contract with a housing nonprofit (or developer that specializes in this form of project) to alter an existing structure (or replace it if it is not salvageable) to accommodate them in a smaller new unit with kids and grandkids in a separate unit within an expanded building.

Obviously, this will increase the size of the building. But as McEwen’s drawings show, the resulting form of such a building can be very much in keeping with existing neighbourhood character and, most importantly, would not require site assembly. And yet, land use efficiency is substantially increased, up to about 40 dwelling units per acre, well above many townhouse projects. 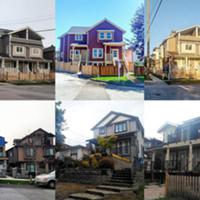 Vancouver’s in a Lather about Duplexes. Come to My Neighbourhood

Some might argue that such an approach bends over too far backwards to the nostalgic biases of those lucky enough to live in their leafy paradise — that the housing crisis is so severe that much more drastic measures are called for: bring on the bulldozers! I must admit that I have, while sitting through interminable meetings where homeowners my age or older wax tearful in odes to this tree or that bird’s nest to be lost through reconstruction, thought it best to simply call up the bulldozers and be done with it.

But this election gives me pause. We have already seen this campaign polarize those whose disenfranchisement from the housing market makes them deaf to preservationist appeals, and their foes who see no greater quest. If this persists through Election Day, no good will come of it. A choice between bulldozers and neighbourhoods devoid of children is no choice at all.

But there is a sweet spot, a pathway between these two camps, and McEwen’s life of pondering this intersection, the intersection between social justice and urban livability, might just be the way. Oh, that our candidates for mayor and city council have the insight to see this pathway, and that our voters have the wisdom to choose the ones who do.