According to a fact check piece by the Canadaland reporter Jesse Brown, who originally helped break the story with the Star, Ghomeshi is clearly still in the business of minimizing and obfuscating key details: the nature of the accusations against him, the number and type of charges that were laid, the results of his trials, and the other accusations made against him dating back 20 years prior to his firing from the CBC — everything from personal rebukes to workplace harassment complaints. Plus ça change...

I have no doubt these are all difficult, but then, so is being punched in the head and choked against your will. So is giving a blow job in fear of further violence. So is being sexually harassed in your workplace. So is feeling, for months or years or a lifetime, that you might not ever be believed because a whole culture silenced you while enabling your attacker to go on doing to others what he did to you.

The astute reader will note that I’m discussing what Ghomeshi is accused of doing as though he actually did it, which indeed is my opinion, despite him not being found guilty in court. To begin with, the judge who acquitted him of five charges was careful to state that his decision didn’t mean the assaults had not occurred. Let’s also recall that his deal with the court required him to apologize to one co-worker for sexually assaulting her at work, an act at least one witness was ready to verify. Most people, including at least one former prosecutor, would assume that to apologize for an act is to admit you’ve committed it. (True to form, Ghomeshi, through his lawyer, claimed the apology was not an “admission.”)

Here’s the thing. People who see a criminal court as the sole arbiter of fact are missing both the point and the truth. The legal system is not built to handle sexual assault, and consequently, only a tiny percentage of such cases ever result in a guilty verdict. The vast majority of sexual assaults are never reported at all, let alone end up in court. This isn’t because they didn’t happen. It’s because the system is set up to make it extremely hard for victims to win. From the myriad social factors that discourage reporting to wildly inconsistent policing to judges who don’t properly apply existing sexual assault laws or understand the effects of trauma, accusers are hampered at every step. The discrepancy between sexual assault statistics and court convictions tells us that the system is failing — not that sexual assaults don’t occur.

There is a vast area between being held criminally responsible in a court of law and having not done any harm. Knowing this, we have developed other systems to try and fill that gap. Whisper networks, call-outs, hashtags, bystander intervention campaigns, white ribbons, campus walk-safe programs, late-night by-request bus stops, bright lights in parking lots, convex mirrors in subway station corners, safe calls, consent cards, updated sex-ed curricula that teach the importance of consent, self-defence classes, bad trick lists, art installations, media stories, public pressure, protest marches, accountability pods, workplace harassment policies, conference attendance bans, revocations of memberships and licenses to practice, firings. It’s nowhere near enough, but then, jail isn’t a trouble-free solution either, given the racism and classism built into the carceral system right alongside the misogyny.

The work of preventing sexual assault is cultural work. It has been going on for decades, and it uses every tool it can lay its hands on. It includes legal system reform, but it’s vastly bigger than that. It is great and terrible work and I don’t expect it to fully succeed in my lifetime, if ever. But if it can make a dent, countless people may be spared the devastation of sexual assault.

In contrast, the comeback narrative for celebrities like Ghomeshi who have been accused of serial sexual harassment and assault focuses on selfish, perpetrator-centred questions such as: When has an accused assaulter paid their dues? What constitutes a sufficient amount of public shaming? How long do they have to stand in the corner before they get to return to the spotlight? The comeback story is not truly concerned with or for sexual assault victims; it relies on the idea of doing time, a mentality rooted in the carceral framework and just as narrow.

That said, I do think part of the cultural work of preventing sexual assault includes answering the question: When can they come back?

To me, the answer is: Never.

Jian Ghomeshi needs to stay out of print and off the radio. Louis CK needs to stay off the stage and Bill Cosby off our TV screens. Les Moonves and Harvey Weinstein need to never be in a position to green-light so much as an infomercial.

There are literally millions of other things these celebrities can do with their lives — perfectly respectable work that involves never being in the spotlight, or controlling it, ever again. If accused assaulters are already the very fortunate beneficiaries of a broken system that has kept them out of jail, that is already far more than they deserve. Let them go back to being on par with the rest of us who have never had their platform or power in the first place. Welcome to the plebeian existence. If that’s punishment, your sense of entitlement is grossly inflated. 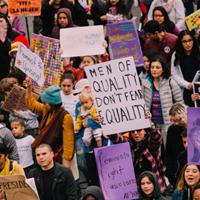 #MeToo Means Men Need to Step Up for Change

These men cannot be trusted with power. Any power, but certainly not the power to be cultural influencers. That they don’t grasp this means they haven’t learned a damn thing, and aren’t even as minimally remorseful as they pretend to be in their PR-mediated fauxpologies.

That’s why it’s also quite fitting, and not at all ironic, that NYROB editor Ian Buruma had to resign in the wake of his decision to publish Ghomeshi’s piece. Buruma attempted to raise devil’s-advocate questions about accused sexual predators, as though these were fresh, innocent new ideas presented in good faith and not long-entrenched patriarchal strategies to sow further doubt about sexual assault. His line of thinking was shut down as the public raised a huge outcry on social media. His shaping of public culture is being rejected. I hope this sends a strong message to culture-makers everywhere.

Ghomeshi’s reflections, soaked in false introspection and dripping with self-pity, should never have been published. He should be grateful he’s not behind bars. And he should shut the fuck up.