For weeks, something very bad has been happening on the U.S.-Mexico border: migrants, mostly from Central America, are not just being intercepted, as they usually are. They and their children are being separated. The children are being placed in “tent cities,” a euphemism for concentration camps. An audio recording, taken in one of those camps has horrified the world with the terrified weeping of little children.

Both mainstream and social media have been inflamed by this outrageous action, which is just the latest step in the anti-immigration campaign President Donald Trump has waged since his first attempt to block Muslims from entering the U.S. in 2017.

It is a made-in-America problem, entirely generated by the Trump admin-istration. But it has an uncomfortable Canadian resonance, which makes it hard for us to take the moral high ground. Perhaps that’s why Prime Minis-ter Justin Trudeau has been so discreet about it, tweeting about the Canada Child Benefit lifting “almost 300,000 kids out of poverty” but saying he doesn’t want to “play politics” about the thousands of kids now under U.S. lock and key. Only on Wednesday did Trudeau say that separating children from their parents is wrong — just as Trump was about to sign an executive order rescinding the policy.

What’s more, it was proud Canadian policy for over a century to take children from their parents. That’s what residential schools were all about; generations of upstanding white Canadians thought they were a good thing, too.

An unsafe nation for years

Trudeau has come under pressure from the NDP to suspend the “safe nation” principle as it applies to the U.S. This principle holds that if you’re an asylum seeker already in a safe nation, you can’t leave it in search of another safe nation. The U.S. has been an unsafe nation for many thousands of migrants and asylum seekers ever since Trump’s inauguration, but it would be embarrassing to say so publicly; besides, Trump would likely slap more tariffs on us out of sheer pique.

We would also be asking for still more asylum seekers, on the lam in the U.S., to cross our border illegally. This would add still more political stress, and Canada’s populist right would grow still more xenophobic as the 2019 federal election grows nearer. And if the populists knew that 68.5 million people worldwide are currently displaced from their homes by the threat of violence, their xenophobia would go toxic.

Faced with a long-term political problem, politicians generally go for short-term political solutions. Whether in North America, Europe or Australia, the short-term solution to asylum seekers is to keep them out. But given the ongoing turmoil that generates these titanic 21st century population movements, that’s akin to building a wall of sand against an incoming tide.

We like to pride ourselves on being a prosperous multicultural nation of immigrants, but we forget that today’s immigrants are still economic forces in their homelands as well as here. They work hard here, often in low-paying jobs, and remit much of their income to their families back home. A 2009 World Bank report says that Canadian remittances in 2006 were between US$12 billion and US$17 billion. Some 330,000 Jamaicans and Haitians sent their families as much as US$280 million from Canada in that year. Without such remittances, poor countries would be even poorer and sending still more migrants to richer countries.

So suppose we made treaty arrangements with a few Central American and Caribbean nations, which would become our associates. Our offer is simple: in addition to your people who migrate here legally, send us 2,000 or 3,000 temporary workers. We’ll assign them jobs where they’re needed and also train them — whether for farm work, factory jobs, wildfire fighting, child care or other tasks. They’ll also have to take English or French lessons while they’re here.

If these workers do well over six months, they’ll be invited to stay another six. If not, back they go. After two years as temporary status, they’ll be free to apply for Canadian residence. With sufficient English or French, qualified new residents could apply to join the Canadian Forces and become citizens after one year of service. Otherwise, citizenship would come after the usual three years. Part of their incomes would go to their families in the old country.

Meanwhile, in our associate countries, Canada would also set up programs in local colleges or universities. These would help train a generation of stay-at-home professionals: doctors, engineers, administrators, educators and tradespersons who would agree to remain in their own country to build up its infrastructure. That infrastructure would be designed to attract Canadian and other foreign investment, generating jobs that will make migration seem unnecessary. Why risk your life (and your children’s lives) to reach a cold, strange country, when you can do OK in your own country, in your own language? 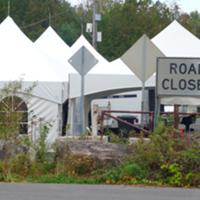 US Refugee Change Will Bring Chaos at Canadian Borders

Like our U.S. cousins, we have treated the rest of the Americas as little more than a resource pit, the place you have to go if you want bananas or gold or sugar or tropical beaches or cheap labour. The U.S., after making an art form out of overthrowing Latin American and Caribbean governments, now feel hard done by because people are fleeing those vicious, corrupt governments as impossible to live under.

But if we treated at least a few countries as trading partners, swapping labour for skills and vice versa, we would have far fewer illegal migrants stumbling across our borders, and many more legal immigrants eager to seize a genuine opportunity to succeed. The U.S. and Europe might take note, and, in some happy post-Trump, post-populist decade, decide to do something similar in the rest of the Americas, the Middle East and sub-Saharan Africa.

Our chickens come home to roost

Today’s migrants, refugees and asylum seekers are our own chickens come home to roost, the survivors of our own exploitive policies. Treating them as stupidly as the U.S. would be an expensive and wasteful idea: the kids they brutalize this summer will have problems for another 60 or 70 years. As Dr. Colleen Kraft, head of the American Association of Pediatrics, said: “Studies of detained immigrants have shown that children and parents may suffer negative physical and emotional symptoms from detention, including anxiety, depression and post-traumatic stress disorder.”

We made ourselves rich at the economic and political expense of the migrants’ countries, and we can’t redress their grievances with just another parliamentary apology. Let’s welcome these immigrants; let them recycle some of their Canadian income back home so their parents and grandparents can live with a little more comfort and dignity. Let’s send some of our own bright young people, including immigrants’ children, to work in those countries. They will learn as well as teach, and when they come home they’ll teach the rest of us about what we’re facing for the rest of the century.

We’ll need to know it, because the rest of this century could be far, far worse than a few hundred kids weeping for their parents in a Texas border concentration camp.