Last summer, my daughter and I hiked the Sulphur Skyline trail in Jasper National Park. As it was mid-week, we had hoped it would not be as crowded as it can be on a weekend.

Nothing, however, prepared us for the caravan of people we encountered along the way.

There were seasoned hikers like us. But there were also people stumbling along in flip flops and city shoes, a young man with a boombox blasting from his shoulder and slower folk who eventually turned back because they could not trek up the steep mountainside.

We could have left behind the bear spray.

The only animals we saw were chipmunks being hand-fed at the summit. No park officials were there to tell the tourists that this was both illegal and unhealthy for the rodents.

A wilderness experience this was not.

I should have anticipated this when the Trudeau government gave every Canadian a free park pass to celebrate the 150th anniversary of the country’s confederation.

The last thing that most of our national parks need is more people.

When Trudeau made the announcement in 2016, visits to the seven mountain parks — Banff, Jasper, Yoho, Kootenay, Waterton Lakes, Mount Revelstoke and Glacier — were already 8.5 million, up nearly 20 per cent since 2011-2012 . The free passes added another five per cent, bringing the total number of visitors to the mountain parks to nine million.

This relentless effort to fill national parks with people does not bode well for the grizzly bears, caribou and other animals that Parks Canada is supposed to protect in wildernesses not overwhelmed by human activity.

It shouldn’t be too surprising to hear that animals fare better when humans aren’t around. Grizzly bears that live outside of national parks like Jasper have lower levels of physiological stress, better body condition and more successful reproduction.

Environment Minister Catherine McKenna appears to have realized that Parks Canada has lost its way.

Yet when she vowed in May to press the reset button and send the agency back on a conservation course, there was a collective groan from scientists and conservationists on social media.

The button has already been reset so many times. There was a round table on Canada’s national parks last year — the fourth since 2008 — as well as the creation of a National Advisory Panel. People have stopped counting the ways in which Parks Canada has been given new direction, only to turn back to embrace business interests.

The most comprehensive reset was one offered up by the government-appointed Ecological Integrity Panel, whose members, drawn from universities, government and non-profit organizations, travelled extensively to speak with Parks Canada staff and with interested Canadians to see first-hand the challenges the agency faced.

Their landmark report, published in 2000, remains timely. It offers a clear plan for limits on development within park boundaries and a strategy for ecological integrity, one in which conservation trumps development and emerging issues such as wildfire and climate change are addressed.

Parks Canada responded to that report and other blueprints by hiring more scientists to deal with species at risk, pollution, invasive plants and animals, and external issues that threaten ecological integrity.

The number of controlled burns was increased to mimic what Mother Nature would have done with lightning strikes. Elk were no longer allowed to take up residence in the Banff and Jasper townsites. Recovery plans were put in place for endangered species such as the black-footed ferret and caribou. Exotic trout were removed from mountain lakes. Golf courses made room for wildlife corridors.

In the years after Stephen Harper was elected in 2006, many of the agency’s scientists were laid off. Those who stayed were forbidden to speak to journalists. One of them was dismissed without cause, allegedly because he wanted to release a year-old report on how a proposed ski expansion would further threaten caribou in Jasper.

As the scientists were shown the door, public relations experts, image consultants and marketing gurus were hired to lure more people into national parks.

The prescribed burn program continued on, but not with necessary speed, according to a scientist I spoke to. The budget wouldn’t allow for it. Burning trees was also deemed to be bad for business during the busy summer months.

The town of Banff is now in greater danger of burning than ever before because of climate change, and because Parks Canada has suppressed fire for so long in critical places such as Sulphur Mountain.

Caribou on the edge

Wildlife and wilderness have paid a high price.

In 2007, the last of Banff’s caribou died in an avalanche after years in which Parks Canada ignored the fate of caribou both within and outside the park. It was the first time a large mammal had disappeared from a national park in over a century.

Caribou in Pukaskwa in Northern Ontario are next in line. There may be as few as five left. None have reproduced in the park since 2011. 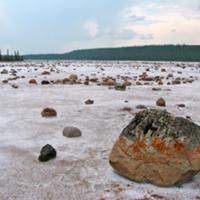 Now, we have the prospects for a paved bike path that will take riders from Jasper to Lake Louise through caribou, mountain goat and grizzly bear habitat.

We also have a road that will lead into a proposed mine adjacent to — and along the headwaters of — the South Nahanni River in Nahanni National Park, a UNESCO World Heritage site. The 180 kilometre all-season road would connect the Prairie Creek Mine to the Liard Highway near Nahanni Butte, N.W.T, with about half of it passing through the Nahanni.

If there really is a reset under McKenna — Parks Canada declined to acknowledge that a panel has been struck — it might take Parks Canada back to its 2006 days when things started to unravel.

But what’s needed is a plan to make up for the progress that has been lost in the past 12 years.

As the wilderness in Canada continues to shrink, time is running out for caribou in Jasper and Pukaskwa, but also for the 42 at-risk species in Point Pelee, Ont., the 18 in Grasslands in southern Saskatchewan, and the 50 or so in the Trent-Severn Waterway, in Ontario.

The list of species at risk in our national parks is a long one, and unless Parks Canada takes meaningful action and puts their interests ahead of business, it will keep getting longer.