“You see, in this world there’s two kinds of people, my friend: Those with loaded guns and those who dig. You dig.” — Clint Eastwood in The Good, The Bad and The Ugly

British Columbia’s election came down Monday to a final, climactic showdown, a political shootout between the BC Liberals, NDP and Greens — where only two winners could emerge.

And like the epic last scene in the classic western movie The Good, The Bad and The Ugly, the twitchy calculations of three gunslingers — BC Liberal Premier Christy Clark, NDP leader John Horgan and Green leader Andrew Weaver — eyeing each other and the extreme tension they felt were nerve-wracking for B.C.

Weaver pulled the trigger first in a surprise draw, announcing the Greens have an agreement with the BC NDP, effectively making Horgan our new premier in the days ahead.

For Clark, it’s the end of the line, as premier and as leader of the BC Liberal Party. She lost this showdown and will now face another over her leadership — unless she steps down soon.

The BC Liberal caucus, facing the potential of years in opposition, won’t want to go into the next election led by Clark after her failure to secure a majority despite the best provincial economy in Canada and four balanced budgets.

The BC Liberals may be tempted to try every trick in the book to retain power, but the idea of putting Clark forward as a pantomime premier who clearly no longer has the confidence of the B.C. legislature would be a huge error.

And there is a lot a stake where BC Liberals need to think of the good of the province and the country — not personal power. It’s important for our economy, and to deal with our growing trade dispute with the United States, that British Columbia has a functioning government with an agreement for stability and a legislative agenda.

If the BC Liberals attempt to delay holding a legislative session for months, try to poach a Green or NDP MLA to their side to block the new government or other desperate measures, it will not only harm the province’s broader interests — it will also backfire badly.

The fact is that a majority of British Columbia voters, and elected MLAs, want a change in government and have different priorities than the tired Clark government.

To ignore that would devastate the BC Liberal brand for a long time to come, and at a precarious moment when another election is always possible.

That’s important because the BC Liberals will not only lose their enormous financial advantage from massive unlimited corporate and foreign political donations; they also won’t have a multimillion-dollar partisan government advertising budget to promote themselves.

The BC Liberals also have to recognize that a new minority government was the likeliest possibility right from election night.

The BC NDP-Green agreement was one of the three possibilities: the other two were a BC Liberal-Green deal or the Greens saying they will go “issue by issue” without an ongoing commitment of support.

When you gamed the options out, however, only one made sense for the BC Greens — an agreement with the BC NDP.

The reasons were obvious regardless of your political leanings.

But the BC Liberals disagreed with all of that. How could Weaver have reached a deal with Clark?

Only if the BC Liberals gutted their own beliefs and platform to meet Green demands in a desperate move by Clark to retain power.

How credible would her promises have been when she and her MLAs just campaigned on the opposite? And would the entire BC Liberal caucus actually have supported Green positions they despise and disdain? Extremely unlikely.

That left the third option: no Green agreement with either the BC NDP or BC Liberals — with the Greens voting “issue by issue.” 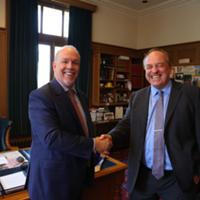 But that option, trumpeted by some observers, actually failed every test.

It would have left Clark as premier, appointing a cabinet, introducing a Throne Speech and budget, and continuing to hire and fire all public servants — all clearly leaving the Greens seen as propping up Clark. That option was hashtag fail.

What the Greens shrewdly realized was that they needed to do what the majority of British Columbians — and especially their own supporters — clearly wanted.

An Insights West poll last week showed that 51 per cent wanted a change after 16 years of BC Liberal rule versus just 38 per cent asking for more of Clark.

It will be up to Clark’s BC Liberal caucus to decide whether the government will change sooner or a bit later, but either way it will happen.

And so the political showdown is over — as the two winners, Horgan and Weaver will now focus on forming a new progressive government. As the loser, Clark faces a bleak political future.