Donald Trump is a symptom of imperial decline, and not really the problem.

The world faces not a “clash of civilizations” with radical Islam (although the dust-up remains a significant challenge), but a crisis of civilization that includes riotous climates, poisoned oceans, failing forests and collapsing economies.

And if you think those two statements ring truer than what you are reading in the media these days, then spend some time with Nafeez Mosaddeq Ahmed.

Ahmed is a British investigative journalist who has been connecting the dots on energy, climate change and globalization for years. The title of his latest book sums up our current predicament: Failing States, Collapsing Systems: Biophysical Triggers of Political Violence.

“Trump is what happens,” recently wrote Ahmed, “when you fail to understand our global problems in their interconnected, systemic context.”

His pithy book lays out the grim context. The new global drama of eroding democracies and failed states, he says, can best be explained by a radical energy story that the media ignores or doesn’t understand.

But these extreme fuels, which require complex technologies to extract, are poor substitutes for cheap oil. They not only return less energy but also require more capital, water and energy to extract.

Our economy, largely shaped by the high-energy returns of cheap fossil fuels, doesn’t know how to metabolize costly fuels that deliver minimal returns.

Meanwhile hydrocarbon emissions are also destabilizing the climate, melting ice, fostering extreme weather and acidifying oceans — and all as you safely read The Tyee.

To visualize the great energy decline, think for a moment about the predicament of polar bears.

They evolved to hunt seals on ice floes nearly 400,000 years ago. Today seals provide 70 per cent of the energy needs of your average polar bear.

But what happens when you melt the ice that serves as a kitchen table for that “fast food” and makes it harder for polar bears to dine?

Well, the bears have to expand more energy to get less. As it gets more “expensive” and complicated for the world’s 26,000 polar bears to live, the empire fractures.

Some starve. Some fail to reproduce. Some mate with grizzly bears. Others try to replace the declines in protein by foraging for goose eggs and blueberries. But that kind of foraging often takes more energy than it ever returns.

In a world of shrinking ice and declining seal diets, the population of bears in the southern Beaufort Sea off Canada’s coast has decreased over the last decade, from 1,500 in 2006 to about 900 bears today. Polar bears can expect more rude shocks.

The human economy, which still depends on rich diet of fossil fuels (80 per cent of our energy sources), grew as fat as the polar bear on cheap energy. When oil prices were low, human economies gobbled oil and expanded like clownish balloons, but whenever prices rose and oil demand slackened, the economy shrank.

But the see-saw has ended and the economy is now having trouble digesting a new diet: unconventional fuels and in some cases, renewables, all delivering diminished returns and funded by easy credit and wild debt.

As Ahmed notes, global oil and gas production once offered God-like energy returns of 100 to one. For every barrel spent finding and extracting oil, society secured a hefty surplus or what the ecologist Charles Hall famously described as “EROI”: energy return on investment. Unprecedented net returns fuelled the unnatural scale of economic growth for 100 years.

But those bountiful energy returns are now falling off a cliff. Today, net energy returns average around 15 to one. Once returns drops below 10 per barrel of energy expended, fossil fuels can’t generate enough surpluses to pay for the arts, government and society as we know it, let alone a transition to renewable energy.

As the quality of fuels decline, the global economy, a highly engineered tree fertilized by cheap oil, has registered the change as “economic stagnation” and stopped growing.

In financial papers, the words stagnation and inequality have become the economy’s dominant vocabulary.

Around the world “the rate of GDP growth correlates directly with the steady decline” in energy returns, notes Ahmed. Gross Domestic Product is dropping or slowing down everywhere from China to Europe.

Ahmed’s analysis is in good company. The U.S. sociologist Fred Cottrell warned in 1955 that shrinking energy returns would transform our high energy culture: “The growth of centralized government will stop and wither. Moreover the energy descent will unleash endemic conflict. Those whose greatest advantage is in the market place will struggle to protect it.”

This energy descent is taking place just as the globe’s fossil fuel economy has transgressed several biophysical limits to growth, including climate change, the decimation of wild creatures and the alteration of the world’s nitrogen cycles from fertilizer abuse.

Climate change is now undoing economies and shifting populations. Heat waves and drought propelled by disruptive carbon emissions could put a third of the world’s population at risk of starving by 2050. The more we disrupt earth systems, warns Ahmed, the more we destabilize human systems.

Take Syria for example. It is not only an energy basket case, but also a bloody poster boy for how things fail due to a constellation of interconnected events.

It started with Syria’s oil production. About a decade ago, it dropped by half due to depletion. In the process, the government lost a key source of revenue that used to subsidize wheat prices.

Hundreds of thousands of climate refugees poured into the cities while food prices triggered protests. The nation’s bloody civil war now threatens to unhinge Europe with millions of refugees.

Complexity, built by fossil fuels, has made the world a fragile place, and the world’s political class is still reading Dr. Norman Vincent Peale.

Or consider, says Ahmed, the mayhem in Nigeria. Its population will rise from 160 million to 250 million by 2025 just as the nation’s key revenue earner, oil, experiences a serious drop in production due to depleted reserves and rampant corruption.

Meanwhile, the terrorist group Boko Haram recruits from areas ravaged by drought and food shortages. The forecast: an escalation of political violence. 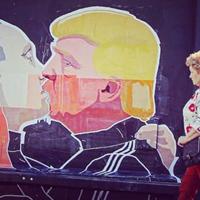 The Macabre Petroleum Waltz of Trump and Putin

And what of the European Union?

Oil production peaked in the region in 2000, and the union’s dependency on foreign oil imports hit 87 per cent in 2014 — the highest level recorded in 25 years.

Unrelenting economic stagnation coupled by high unemployment has revived nationalistic movements while climate change could overwhelm the continent with more refugees from North Africa and the Middle East by 2030.

So Trump and anti-Muslim rhetoric is what happens when you ignore a qualitative change in energy resources and a decline in the Earth’s resources.

Meanwhile the mainstream media prefers to focus on chaos and terrorism, and ignore the many-headed hydra quietly engineering these spectacles.

“Human systems — social, political, geopolitical, cultural, and so on — are becoming destabilized in the context of escalating Earth System Disruption driven by dependence on fossil fuels,” writes Ahmed.

“But the failure to understand this is driving increasingly reactionary approaches that address only symptoms of this destabilization.”

This may well be the globe’s most pressing negative feedback loop.

Years ago, the Christian philosopher C.S. Lewis wrote that “If you look for truth, you may find comfort in the end; if you look for comfort you will not get either comfort or truth only soft soap and wishful thinking to begin, and in the end, despair.”

Ahmed has uncovered some uncomfortable truths. Read him.

In the end, you will have a much clearer sense of what an energy descent means for ordinary people.