“We have over-promoted and overhyped this vaccine. It does not protect as promoted. It’s all a sales job: it’s all public relations.” — Michael T. Osterholm, director of the Center for Infectious Disease Research and Policy, University of Minnesota, 2012

What if everything you were told about flu shots, their importance and effectiveness, the need for health care workers to get vaccinated, and the huge number of deaths the flu causes every year were wrong?

Or so twisted, spun, exaggerated, extrapolated and aggrandized as to be highly misleading?

One would like to think there would be a public inquiry, investigations and politicians demanding answers. But despite lots of factual evidence that the flu shot has been oversold and underperformed for years, the steady drumbeat of pro-shot propaganda continues.

And it comes not only from the medical establishment, but from pharmaceutical companies that stand to make millions in profits and the governments that pay them to inoculate Canadians with a product that is rarely more than halfway effective. And the media mostly repeat the hype.

Let’s start with how ineffective the flu shot is. In the 2014-15 flu season it worked less than seven per cent of the time — or was 93 per cent ineffective.

“I would say overall it’s signalling no protection,” said Dr. Danuta Skowronski of the BC Centre for Disease Control in 2015.

In 2015-16, the flu shot was “Overall, just shy of 45 to 50 per cent” effective, according to Skowronski, who reported that figure to the World Health Organization in July 2016.

Now we learn of serious problems with flu vaccine delivered by nasal spray — used particularly for children to avoid the needle they fear — and a recommendation from the U.S. Centers for Disease Control that it not be used this year.

“The decision was based on new data showing that the nasal spray was not very effective at preventing flu from 2013 to 2016,” reports Scientific American. “In fact, last flu season (2015 to 2016), the nasal flu vaccine had no protective benefit for children ages two to 17. In contrast, children who got a flu shot were 63 per cent less likely to catch the flu than people who weren’t vaccinated, the CDC said.”

So the obvious question is why hundreds of millions in taxpayer dollars have been spent over the years on a medicine that at best might work only half the time, and at worst in seven per cent or less of cases?

This season governments have spent $75 million on 11.6 million doses of flu vaccine, according to Canada’s Public Health Agency.

But Skowronski — who is admirably open about flu shot problems — says that without a flu shot, the average adult will get the flu once every 20 years. With a flu shot at 50 per cent effectiveness, that is reduced to once every 40 years.

“If you think about it, cutting your risk of hospitalization or death by half is really important protection for people with high-risk conditions,” Skowronski said.

Those at high risk should be getting flu shots. But spending so much money on dubious drugs in a health care system that falls short in so many ways seems ludicrous.

Then look at flu death claims. A Government of Canada website titled “Know The Flu Facts” says “In Canada, an average of 12,200 hospitalizations and 3,500 deaths related to the flu occur each year.”

“Between 4,000 and 8,000 Canadians can die of influenza and its complications annually, depending on the severity of the season.”

Really? Because the Public Health Agency of Canada’s own reporting shows very different statistics indeed — and the numbers aren’t even close.

There can be many explanations and fudges, such as terms like “influenza and its complications,” but the actual statistics cited are the government’s own.

But the end result is the exaggeration of what is obviously a tragic loss of lives into a misleading argument for flu shots — and for mandatory flu shots for health care workers in B.C. and other jurisdictions.

How many flu deaths have been recorded so far this season? Just 20 across Canada, with most over age 65. That may mean the flu shot is more effective a match this year as some health experts have said, but it still doesn’t come close to the claimed thousands of fatalities.

Given all this, why are doctors, nurses, hospital workers and residential care facility staff in British Columbia all required to have a flu shot or wear a mask for their entire shifts — often 12 hours?

Again, the reality is that not only are flu shots nowhere near 100 per cent effective, neither are masks, as an expert noted in commenting on similar policies in the U.S.

“Mandatory masking in lieu of vaccination of health care workers as is being implemented in Massachusetts makes no sense and will do little to stop the spread of infection,” said Dr. William Buchta, a Fellow with the American College of Occupational and Environmental Medicine and a medical director of employee occupational health Service at the Mayo Clinic. “There are a number of proven means of reducing hospital infections that need to be implemented, but this is not one of them.”

But what is effective is sending health care workers home at the first sign of illness, which is even more important when it’s clear that half or more of those workers who got flu shots aren’t actually protected by them.

And that means those workers are putting their patients at risk of contracting the very flu that the shots are supposed to stop — but don’t — creating a false sense of security.

Health care authorities facing ever tighter budgets are much happier to impose a shot than send workers home on sick pay. But if lives are at stake, that’s what should be happening.

Unfortunately, it’s health care workers who are stuck with a no-win choice — get the shot, wear a mask every shift for months or quit your job.

Dr. Tom Jefferson of the Cochrane Collaboration, an independent organization comprised of researchers, health professionals, patients and others in 130 countries, said in 2012 that vaccinating health care workers for the flu — as later imposed by the B.C. government — was not only wrong but medically incorrect.

“We report that no effect of the influenza vaccines was detectable on influenza and its complications such as death. We detected an effect on non-influenza specific outcomes such as death for all causes. This we found to be implausible given that in the elderly and frail death occurs for a variety of causes completely unrelated to influenza,” he wrote in a Vancouver Sun article criticizing the government and health authorities, who Jefferson said misquoted Cochrane research.

And Jefferson made clear how angry he was.

“It is not my place to judge the policies currently underway in British Columbia, but coercion and forcing public ridicule on human beings (for example by forcing them to wear distinctive badges or clothing) is usually the practice of tyrants,” he concluded.

This all raises the big question — who is pushing flu shots and why?

Those multinational corporations are joined by many major health charities and organizations, from the Canadian Medical Association to the Heart and Stroke Foundation of Canada to the Canadian Pharmacists Association and both the federal and Ontario governments’ public health agencies.

None of that is to imply anything improper. There is obviously a consensus among major pharmaceutical companies, health organizations, medical associations, government agencies and others on making flu shots a high priority for funding and promotion — despite their questionable efficacy — and, without doubt, lives have been saved and hospitalization and endless hours of illness avoided for many Canadians.

But that doesn’t negate the less than 50 per cent effectiveness rate. Nor does it mean flu shots that are so prominently promoted at the cost of hundreds of millions shouldn’t be seriously questioned.

Those funds could be used to improve dozens of other health outcomes, from better emergency room care to preventive measures to simply ensuring better cleaning, hand washing and other precautions are taken in hospitals and nursing homes to avoid spreading the flu and other illnesses.

Despite the hype, Canadians are not convinced that the flu shot is worthwhile — just 35 per cent of adults in B.C. and Canada’s other three largest provinces got one last year, says Skowronski.

And that is heartening — not discouraging — because there are a lot of reasons to doubt the propaganda surrounding flu shots.

One researcher has succinctly summarized the questions and concerns the flu shot focus raises — and been denounced for it.

Peter Doshi is no slouch — assistant professor of pharmaceutical health services research in the school of pharmacy at the University of Maryland and associate editor at The BMJ (formerly the British Medical Journal).

Doshi’s research “focuses on policies related to drug safety and effectiveness evaluation in the context of regulation, evidence-based medicine, and debates over access to data.” He also completed a fellowship in comparative effectiveness research at Johns Hopkins and received his PhD in history, anthropology, and science, technology and society from the Massachusetts Institute of Technology.

That preface is necessary, because Doshi took on the flu shot with a vengeance in a 2013 article in The BMJ titled “Influenza: marketing vaccine by marketing disease.” 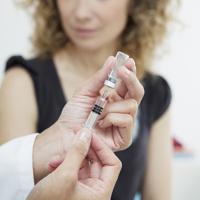 “This enormous growth has not been fuelled by popular demand but instead by a public health campaign that delivers a straightforward, who-in-their-right-mind-could-possibly-disagree message: influenza is a serious disease, we are all at risk of complications from influenza, the flu shot is virtually risk-free, and vaccination saves lives.

“Through this lens, the lack of influenza vaccine availability for all 315 million U.S. citizens seems to border on the unethical.

“Yet across the country, mandatory influenza vaccination policies have cropped up, particularly in health care facilities, precisely because not everyone wants the vaccination, and compulsion appears the only way to achieve high vaccination rates.

“Closer examination of influenza vaccine policies shows that although proponents employ the rhetoric of science, the studies underlying the policy are often of low quality, and do not substantiate officials’ claims. The vaccine might be less beneficial and less safe than has been claimed, and the threat of influenza appears overstated.”

Let me end by saying that for the first time ever, I had a flu shot this season on doctors’ strong advice because I’m recovering from pericarditis, an inflammation of the lining of the heart, and getting the flu could jeopardize my steady recovery.

I have previously condemned the overwhelming hype around flu shots but always advised that those who need it — who are at risk — should get it. I took my own advice this season.

But my convictions remain strong. Flu shots are very ineffective and overused; governments and medical organizations exaggerate death rates from the flu; health care workers should not be forced to have a flu shot or wear a mask; and scarce health dollars should not be pumped into flu shots — only those at serious risk should be provided with them.

It’s time for an independent review of flu shots, not an annual and ever-growing promotion of expensive yet ineffective vaccinations.