It’s mid-December. There’s a blanket of snow across the Lower Mainland, and Jeremy Nuttall and I are riding the SkyTrain out of downtown Vancouver.

Our intrepid Ottawa reporter is in town, and happens to have an interview in Port Moody. Normally, the ride on the West Coast Express from Vancouver to Port Moody would take 25 minutes and cost $7.25. By car with traffic, the ride would be about an hour.

But on Dec. 2, the region got an early Christmas present — though if you consider when this present was first expected, it’s late by 16 years.

That present is the Evergreen Line, a $1.4-billion, 11-kilometre, six-stop SkyTrain extension that finally connects Port Moody and Coquitlam to the region by rapid light rail transit. The three-zone fare that will take you here from Vancouver will cost you $5.50.

Trains bring change, not just in colonial histories, but as new transit lines connect regions today. Trains bring development along their routes, and rising real estate prices. Trains bring new people to existing communities who think they are new. Trains mean cars can be left at home and trains bring in new workers that are only a commute away.

So what does this mean for Port Moody and Coquitlam?

Jeremy hails from PoMo and has some time to kill before his interview and some local haunts to check out.

So we set out to find some Tri-Cities residents, and ask them what they think about the new train in their backyard.

We roll past Lougheed Town Centre Station in Burnaby, part of the Millennium Line, which opened in 2002. After that, we’re on new tracks, only in use for a week.

Burquitlam Station is before us. Rising from flat plazas are residential towers, with more on the way. They’ve got names like Crown, Uptown and the Burquitlam Capital. Developers have staked out here since the new station was announced.

And yes, Burquitlam is the area’s actual name. The portmanteau was first used in 1906 for a Coquitlam post office that bordered Burnaby. A shopping plaza later adopted the name, and now the SkyTrain stops at Burquitlam Station.

The tracks bend downward. A tunnel is ahead of us. It’s the work of Alice, a 1,100-tonne machine named after Canadian geologist-paleontologist Alice Wilson. This tunnel is responsible for some of the Evergreen’s delay. One worker even alleged he was fired after raising safety concerns.

About 2.2 kilometres later, we exit the tunnel, to views of Burrard Inlet and the Coast Mountains. We came to a stop as we approach a thin line of stores that look like the main street of a small town.

A short walk from the station is a lone, cubic shop. It’s a Monopoly piece of a building, with a big red boot above the entrance. Jeremy knows it well. Port Moody parents like his came here often with their kids in tow.

Inside, a man at the counter is wearing a denim apron over a blue Christmas sweater. He describes his city. “It’s a little laid back here, a little different from everywhere else. We’ve always been in the shadow of the rest of Vancouver.”

That’s Steve Quigley. His face is one everyone around here knows. The shop is his, and before that, was his grandfather’s. He says it was built by veterans of the First World War. Quigley has been here for 40 years, and like many local tradesmen, his favourite thing about his work is the people. “I very much enjoy talking to everyone,” he says.

Change is literally on Quigley’s doorstep. In front of his store is a hole in the ground the size of a city block. For 30 years, this was home to the Port Moody Legion. But with declining memberships, Legion executives sold the development rights to the property. A five-storey building is coming, with shops, condos and a new legion. A way of bringing the old with the new.

“Development is definitely booming,” says Quigley. As for what the train will bring, he notes seeing a panhandler the other day. He worries about crime. “People will definitely come in on the train. I hope they are the right kind of people.”

At the moment, the majority of people coming in seem to be explorers. The Evergreen has only been open a week, but it’s already brought visitors to the Gallery Bistro from next-door Coquitlam and New Westminster in the south.

Helen Daniels is pleased. “There’s people coming here that have never been here before,” she says. “Change is good. We welcome change.”

Daniels runs the Gallery Bistro with her husband, steps away from Quigley’s. It’s a restaurant that’s a host to “a little bit of everything,” she says — works by local artists on the walls, regular home to Port Moody’s ukulele club and “Green Talks” on everything from urban farming to solar energy.

A short walk away is a shop called Pinball Alley. The place pulsates with retro cool, filled to the brim with vintage clothes, records and knick-knacks — there’s a Star Trek Barbie here waiting to be taken home.

It feels like something you’d find on Vancouver’s Main or Commercial streets. Heather Wallace, who co-owns Pinball with her husband, is aware of that. They lived in Vancouver before moving to a townhouse in Port Moody to start their family. By opening their business here, they avoided the big city’s steep competition. A mom-and-pop shop was born.

And with the train coming in? “It opens up possibilities,” says Wallace, “and we get to feel like pioneers. It’s an exciting time for Port Moody.”

I leave Jeremy behind in Port Moody for his interview and continue on the train to Coquitlam Central Station. This is the busiest hub on the new line, with connections to two dozen bus routes and a big mall you might recognize from the 2007 film Juno.

Some shiny new towers are on the way. The Lloyd (part of Polygon’s master-planned Windsor Gate), Grand Central, and MThree — pronounced “em-three,” not “mmm... three” like the popular Canadian muffin chain.

Development has spiked along the Evergreen Line, and house prices have also been rising. I think about a recent CBC interview with the mayors of the two cities on the transit route that highlighted the hopes and concerns.

Port Moody’s Mike Clay: “We’re losing the suburban feel. The suburbs are becoming more urban. We’re all sort of in this together.”

Coquitlam’s Richard Stewart: “We know that this region is going to get another million people in the next 25 years and we have to be able to get as much [as] possible near to SkyTrain lines, near rapid transit systems, near transit hubs, so that we can minimize the 600,000 cars that a million people would produce.”

I hop on the train back to Vancouver and spot a family of four. Dad’s got the youngest in his lap. An older toddler stands on the seat and has two hands on the window as he looks out to take in the mountains. There’s luggage around them.

“It’s our first time,” the mother, Katrina Lloyd, tells me. “We’re taking the train all the way to the airport.”

They didn’t even have to take the bus to get to the SkyTrain station. They just walked a few minutes from their Coquitlam home.

In the wake of the Evergreen Line, they worry a bit about crime, like bootmaster Quigley in Port Moody. As for whether the train will drive home prices up, Lloyd shrugs. “That’s just development,” she says.

Our train returns to Port Moody and a teenage brother and sister walk in. This is Jack, 17, and Lucy, 16. They’re also really excited about the train, because this means they can get to downtown Vancouver with ease.

“From here we used to have to take the 97 B-Line to Lougheed to transfer,” says Lucy.

“She always made our mom drive her,” says Jack. 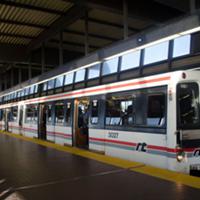 The Evergreen might change Port Moody, but Jack says being more connected to other places by transit is a “risk/reward.”

Like Jack and Lucy, I was in my teens when rapid transit came to my neighbourhood around the Oakridge station. It was 2009, the year of the Canada Line. A gift to locals and visitors before the Olympics.

With Vancouver’s affordability woes, transit-oriented development is one tool to combat our housing shortage. For many neighbourhoods, rapid transit means rapid change. Houses along the Canada Line’s Cambie Street are being assembled like Monopoly properties for rezoning, development and density. Even the church where I once played in a piano recital will soon be demolished for homes. And rapid transit did bring panhandlers and other newcomers. Some of my friends didn’t feel as safe walking home at night, as more people dawdled in alleys and parks.

But before the train, Richmond and downtown felt worlds away. I would take the 98 B-Line, and it was 30 to 45 minutes to either spot. After the train, the ride became 10 minutes. Both places didn’t feel far away anymore. They felt much closer. A part of my backyard.

And now with the Evergreen, I’m closer to folks like Jack and Lucy. Metro Vancouver just got a lot cozier.