“Frankly, I am astonished that the NDP cannot get behind a deal that today has the full support of all progressives across Europe.” — International Trade Minister Chrystia Freeland

And so Freeland, the minister responsible for the Canada-EU Comprehensive Economic Trade Agreement (CETA), confirmed in Parliament on Oct. 27 that she has no concerns about the controversial investor-state dispute settlement (ISDS) provisions in the deal. (While offering the rather inflated claim that 100 per cent of “progressive” Europeans agree 100 per cent with her.)

Freeland could have taken a different tack.

She could have acknowledged there are real concerns that the ISDS provisions in CETA remain regressive and dangerous (as I outlined in The Tyee and as my Osgoode Hall Law School colleague Gus Van Harten sets out more precisely here.)

She could also have chosen to be frank about the ongoing challenges for the dispute settlement provisions surviving intact in CETA as we move into the ratification stages. (As I outlined in The Tyee and as others have cogently argued.)

Instead, the minister chose to double down on her standard double trope of “We Liberals are progressive” and “The NDP is anti-trade.”

Freeland showed the Liberals are continuing a “progressive” agenda that is a direct extension of a Conservative party trade ideology that seeks to smuggle corporate-rights charters into “trade” deals.

In pursuing that agenda and CETA’s approval, the Liberals are deflecting questions and blocking the facts from the public instead of supporting democratic values.

In particular, two Liberal manoeuvres seem intended to hide important truths about the corporate-rights agenda of CETA and to shield the trade deal from critical scrutiny that could reveal those truths.

With respect to the former, next week I will outline how the Liberal government is supporting its “progressive” case with a document that purports to be an interpretation of CETA but is clearly also an exercise in political spin, peppered with misleading formulations.

Today, let’s start with the efforts by the Liberals — quite possibly supported by the Conservatives — to push CETA’s implementing legislation through Parliament with as little debate and awareness as possible.

Five days after Freeland’s answer in the House, the Standing Committee on International Trade decided to study CETA and to then fold that study into its consideration of Bill C-30, An Act to implement CETA, once that bill comes to the committee after second reading in the House.

A close reading of the committee’s decision reveals something extraordinary. It reads (my emphasis added):

“That, with respect to Bill C-30... and regarding the Committee’s subject matter study and its future legislative study, the Committee:

“invite witnesses to comment on both whether Committee members should support the Bill and ways in which Canada can benefit from the Agreement; and

“consider testimony, written submissions and briefs only from the witnesses appearing before it.”

Normally, Parliamentary committees interested in fair and full treatment of a subject will welcome written submissions from individuals and organizations who are not lucky enough also to be invited to testify in person to a committee.

But, here, the Liberal-dominated committee is stacking the deck to ram through legislation with the assistance of an anti-democratic parliamentary move: no one can write the committee with his, her or its views on CETA unless also invited as a witness.

Beyond limiting democratic input quantitatively, what is this warped procedure likely to produce by way of “evidence” for the committee? A stream of witnesses who will testify to the good parts of CETA while ignoring the problematic investor-state parts (and other problematic bits) or who will talk up the ISDS provisions as the cat’s meow.

This skewing of evidence flows from the fact that Liberal MPs dominate this parliamentary committee. Of nine members, six are Liberals (the chair plus five regular members).

And then there is the Conservatives’ representation with two members. Thus eight of nine committee members are from parties who are gung ho to push CETA through and not keen on its flaws being highlighted.

Compare this to the ongoing House of Commons’ Special Committee on Electoral Reform (ERRE). That committee was structured proportionally based on each party’s share of the popular vote. The Liberals are in a minority while the NDP has two seats (versus one on the committee considering CETA) and the Green Party has one member (versus zero). Compare also to this electoral reform committee’s democratic openness: it receives briefs and submissions from people who didn’t appear as witnesses and also engaged in a series of consultative meetings around the country.

The special committee on electoral reform has shown itself, so far, to be pursuing – or, at least, forced to pursue – an open-minded agenda that the government cannot control. One suspects the Liberals have learned a lesson: namely, that robust democratic discussion makes it difficult for single-party or elite agendas to run roughshod over policy outcomes. 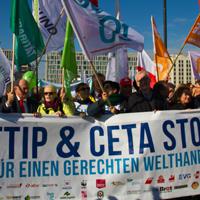 Don’t Be Fooled by Liberal Spin on CETA Deal

More generally, one suspects Prime Minister Justin Trudeau’s team may also be getting tired of the implications of their promises of greater transparency, which were part of the democratic-reform bundle the Liberals put together to help win the last election.

To demonstrate this point, let us return to another exchange in the House of Commons. This one occurs during a Sept. 24, 2014 debate over an economic agreement with South Korea. Freeland was then the Liberal opposition’s trade critic.

MP Don Davies, then the NDP trade critic, asked a zinger of a question of Freeland:

Freeland chose to lead off her response with what she no doubt thought was a counter-zinger but which was actually a non-sequitur and an insult to people with concerns about how agreements like CETA end up looking the way they do:

“On CETA, we in the Liberal Party are adults and we understand and respect the fact that, if trade agreements are going to be done, they need to be done behind closed doors,” she said. 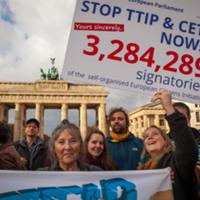 There would appear to be a straight line between Freeland’s “adult” valuing of secrecy in CETA negotiations and current Liberal efforts to keep the parliamentary committee reviewing the agreement as closed as possible to alternative perspectives.

The common denominator is a disdain for timely and serious democratic input.

We could always compliment the Liberals for being consistent for once.

Or we could speak out against such manipulative politics and demand that the House of Commons’ international trade committee stop doing the government’s bidding and open up its process to arguments that the Liberal-Conservative alliance does not want to hear — or, more importantly, does not want Canadians to hear.