“It is literally too late to close the door after the horse has left the barn.” – Old English saying.

The BC Liberal government is left with a distinctly unpleasant barnyard smell after it acted far too late to deal with skyrocketing housing prices and stepped into it with a new tax on foreign, non-resident homebuyers.

Metro Vancouver’s “prime properties” have seen a 36 per cent price increase in the last year, the highest in the world according to Knight Frank’s Prime Global Cities Index. The report, which looks at prices for the top five per cent of properties, found increases here outpaced real estate hotspots like Shanghai, Toyko, Miami, San Francisco or Zurich.

And another report from BetterDwelling.com shows that in the past 15 years housing prices here rose 172 per cent, adjusted for inflation, while household income went up by a paltry 10.8 per cent.

Most experts recommend spending three to four times your annual income on a home, the report notes. “Turns out you would need a family income of $318,275, a whopping 322 per cent rise over today’s income.”

And any claim that the BC Liberals’ surprise move to impose a 15 per cent tax on foreign nationals buying residential property will make homes affordable for average buyers is a cruel joke.

That horse has truly left the barn. Median detached housing prices would have to be cut in half from their current $1.58 million to even begin to be affordable, using the term almost jokingly – for some upper-middle to higher income families. Everyone else is out of luck.

And if the market did collapse and prices fell 50 per cent, we would be in a complete economic crisis and no one would be buying houses anyway – they would be hoarding canned goods and water.

How bad is Vancouver’s housing affordability crisis? Incredibly, unbelievably awful, with the price of detached homes up 38 per cent in one year.

One example: Only 10 years ago, just 11 per cent of Vancouver detached homes were valued at $1 million or more – when the city was already Canada’s most expensive.

Today more than 90 per cent of Vancouver detached houses are worth more than $1 million. 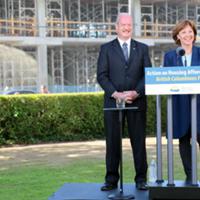 Please Advise! Why Tax Foreign Homebuyers Before the Study’s Done?

And despite slowing sales due to the new tax on foreign buyers and the impact of ridiculously high prices, the market is nowhere near a real slowdown.

“We’re still in a seller’s market,” according to Real Estate Board of Greater Vancouver president Dan Morrison. “You’re not going to see much downward pressure on prices until the sales-to-active-listings number falls below 12 per cent, and we’re a long way from that.”

“You have severe affordability issues in Vancouver. It has become a serious public-policy issue, so it’s not healthy,” he said in an interview. “Prices are moving upward at an irrational rate.”

True. And for some personal perspective, let me tell you about one modest home on West 15th Avenue in Kitsilano that I’m very familiar with – because we used to live there.

The new owner eventually moved in, did some renovations and sold it for about $500,000 a few years later.

Its BC Assessment value in July 2015 was $1.96 million – and a nearby very similar house sold recently for $2.5 million!

That means the value of our old Vancouver home is 10 times greater than it was 30 years ago, with most of the increase in the last decade.

And so, as the price of that house and the homes across the region show, the horse has not just left the barn – it has left the country.