"Donald Trump is a progressive. He's not a conservative." -- Right-wing broadcaster Glenn Beck 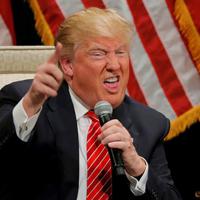 Why Trump's Ugly Campaign Could Be Good for His Country

Bernie Sanders' socialists of Canada rejoice -- there is a progressive choice for U.S. president they can like. He was in nearby Lynden, Washington on Saturday, and his name is Donald Trump!

It may surprise you, but the Republican Trump card will play better for Canadian and American leftists than the corporately funded, consummate Washington establishment insider and Democratic disaster Hillary Clinton.

Suspend your socialist skepticism for a nanosecond, overlook for a moment the obviously offensive Trump quotes on Mexicans, women, the disabled and others, and then look at the cold hard facts on both candidates.

Who do the odious, far-right billionaire brothers Charles and David Koch strongly oppose?

Who just said "it's possible" Hillary Clinton would be a better president than Trump?

Who else says Trump is a progressive?

The right-wing National Review, which said "All of the hubbub over Trump's newfound embrace of populist, rightist rhetoric tends to conceal his many progressive stances."

Who joins with labour unions in strongly opposing the proposed Trans Pacific Partnership trade agreement that includes Canada and the U.S., calling it "insanity?"

Who likes the TPP?

B.C. Premier Christy Clark, who attacked Trump for rejecting it.

"It's not helpful when down in the States there are serious presidential candidates who are talking about building a wall between Canada and the United States. Trade barriers are just another kind of wall," Clark told CBC Radio.

Who agrees with labour and progressives that the U.S.-Canada-Mexico NAFTA deal was a bad one?

Trump, who calls it "one of the great economic disasters."

Who, like labour, wants to take back jobs from the military dictatorship of China?

Trump, who said that unlike his Republican opponents, he opposes cuts to Social Security, Medicare, and Medicaid because the real problem in America is the loss of "manufacturing jobs to China."

Who will raise taxes on the rich and is "open" to increasing the minimum wage, possibly beyond $15 an hour?

Despite his Las Vegas hotel trying to stop an organizing drive, Trump says he has had "great relationships with unions."

And in his 2000 book The America We Deserve, he wrote: "Is Trump a union man? Let me tell you this: Unions still have a place in American society. In fact, with the globalization craze in full heat, unions are about the only force reminding us to remember the American family."

Rise of the FU voters

Trump's Democratic opponent Hillary Clinton has repeatedly assured voters that she actually is a progressive as she wins the nomination battle with left-winger Bernie Sanders.

But there's lots of contrary evidence.

Clinton sat on the board of directors of fiercely anti-union Walmart for six years without commenting on its repeated efforts to stop organizing drives. Two former directors who sat with Clinton on the board between 1986 and 1992 say she never spoke up for labour -- but she did end up with $100,000 in Walmart shares in addition to her $15,000 a year directorship.

"I'm always proud of Walmart and what we do and the way we do it better than anybody else," Clinton said at a June 1990 shareholders meeting.

That kind of attitude has paid off for Clinton.

Clinton was paid $675,000 for three speeches to Goldman Sachs, the giant investment banking firm bailed out by the U.S. government in the subprime mortgage scandal.

"It was pretty glowing about us," said an executive who attended one of the speeches. "It's so far from what she sounds like as a candidate now. It was like a rah-rah speech. She sounded more like a Goldman Sachs managing director."

Clinton has refused to release transcripts of the speeches.

So is Trump really the progressive candidate?

No. But Clinton is hardly able to claim that title either.

Trump's success is coming because of anger at the establishment of both Republican and Democratic parties -- and leaders like Clinton.

As irreverent progressive political commentator John Stauber summed it up:

Let's call them Trump's FU Voters. They are huge in number, hate politicians with a passion, don't give a rat's ass about the Koch Brothers or MoveOn, might not even like The Donald, but see him as a statement of rage and discontent, as way of giving the finger, a huge middle finger, to all the hacks and flacks and whores and pimps of both the Republicans and Democrats who have delivered America into the hands of the one per cent, the professional political class who are perceived as the enemy.

The FU vote is "yuuuge," and getting "yuuuger." Things are shit-canning across America and the world in so many ways, and here comes this brash jerk of a sexist celebrity billionaire with the sexy model wife, a contradictory emotional angry guy who has never ever held office or been in the military or done anything you are supposed to do to be dogcatcher, much less president, and they are ready to vote for him, to say "screw you" to everyone. Do not discount Trump's strongest weapon, the FU Voter, slouching toward Bethlehem to be born, just before Christmas, 2016, like some new Hollywood release.

Trump may be scary to many progressives, but what's likely scarier is that many working class Americans endorse his populist messages and find his positions far more like theirs than Clinton's or the establishment of either party.

And that may be a winning formula that trumps Clinton's hopes.