We hear a lot about the free market and those wise, well-informed consumers who benefit by choosing the best goods and services at the lowest prices. Their collective careful choices, we're told, determine which corporations rise and fall, and we all benefit. 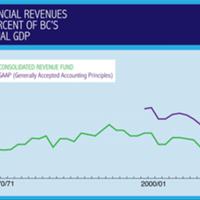 The Era of Tax Cut Stupidity that Starved BC

In reality, the free market can't compete with what I call the idiot market: the foolish and ignorant consumers who insatiably demand what will never benefit them. They want goods and services that will positively harm them, their children and their society, and they will pay top dollar.

Consider the countless hours of highly skilled effort that go into making a modern movie: not just the movie technicians, but the people who dig the rare earths out of the Chinese soil to build the computers the technicians use, and the billionaire computer executives who oversee the building of those computers.

The movie runs a couple of hours. Those who watch it pay handsomely for admission, not to mention the overpriced popcorn, soda, coffee, pastries, etc. that are now part of the movie ritual. They will also pay for the sonic bludgeoning from the theatre's sound system, which will batter their ears into early tinnitus during the ads and trailers before the feature even starts.

And how much do they pay for this experience? Well, Batman vs. Superman racked up $170 million in its first weekend.

Think about this. Batman and Superman are heroes of the kiddie lit of the 1930s and 1940s, from comic books that cost a dime when a dime was big money. Parents regarded them as low-grade entertainment where problems were solved with a punch in the mouth. But we young idiots loved them. I was thrilled as a 10-year-old to meet a guy who actually wrote comic-book scripts for Batman (at $100 a pop – more than $900 in today's dollars). Idiots like me paid his salary, one dime at a time.

The idiot market goes back a long way, at least to the Greek poets who could con their warlord patrons into paying them to chant epics like The Iliad about them and their ancestors. Seeing and hearing about ourselves in the media somehow makes us more real than we are in reality: "Zeus! I'm immortalized in The Iliad!" "Omigod, my street was on The National!"

But the idiot market extends far beyond half-billion-dollar bedtime stories for immature adults and epic verse for warlords. It includes a host of demands whose satisfaction only leaves customers worse off than ever.

Economics is premised on the rational, fully informed consumer who buys goods and services on the basis of maximizing self-interest -- getting the most and the best for the least. If producers can't deliver for such a consumer, smarter producers will take over.

If I were ever to meet such a rational, fully informed consumer, I would probably fall on my knees, acknowledge my saviour, and follow her wheresoever she would lead me. And then I'd likely desert her to pursue my own irrational, poorly informed desires, shaped when I was an idiot of very few years.

I well recall when grandmother introduced my brother and me to a bag of Post Sugar Crisp cereal circa 1949: puffed wheat with added sugar. Like all our generation, we were staggered by the sheer goodness of life with Sugar Crisp, and countless dentists have sent their kids to great universities on the results on that postwar service to the idiot market.

Sixty-five years later, every supermarket devotes whole aisles to more sophisticated vehicles for delivering sugar to children's teeth, not to mention obesity and Type 2 diabetes to their parents.

The idiot market, in other words, caters to imaginary needs and demands we have no right to make. It knows we will pay a lot for what will hurt us -- or go into debt for it, or commit crimes for it. Tobacco, fentanyl, over-processed foods, oversized SUVs and wars we shouldn't fight are all top sellers in the idiot market.

One of the beauties of the idiot market is that it sells you stuff that will make you feel bad. Then, while you wait to pay for it, you're lured into buying the magazines at the checkout stand with Dr. Oz's latest cures that don't work. Then you console yourself by going back and buying whatever made you feel bad in the first place.

The idiot market can even co-opt worthwhile goods and make them worthless. Antibiotics have saved untold millions of lives since the discovery of penicillin. But idiotic use of antibiotics (treating colds or fattening cattle) has enabled bacteria to build resistance. Within a few decades, even the simplest surgery could mean life-threatening, untreatable infections. (The idiot market will offer miracle cures that also blast belly fat and reduce stress.)

Once the idiot market gains a foothold, it creates a large, well-funded interest group with its own idiotic needs and demands. Tobacco companies are a public health hazard, yet they still prey on teenagers as the only demographic idiotic enough to take up the habit. And they do so because their managers and shareholders have their own needs to satisfy in the idiot economy, like sending their own idiot teenagers to great universities.

Demanding its own human sacrifices

To take a local example, British Columbia hopes to sell a lot of liquefied natural gas to the idiot market abroad, where it will help idiots there make goods for Canadian idiots. Burning the natural gas, whether here or in China, will only accelerate the pace of ruinous climate change, but the idiot market will not be denied or delayed; that's why it keeps electing idiot-friendly governments.

Sometimes we cave in to the idiots, whether by failing to ban stuff like tobacco or by legalizing stuff like marijuana. (Both produce brief euphoria while depositing lethal tar in our lungs.) In a way, it makes sense to cave in. It saves us money spent on enforcing unenforceable bans, as we learned when we stopped prohibiting alcohol. Then we can spend less on law enforcement and more on the idiot market.

Like the Aztec gods, the idiot market demands its own human sacrifices, and on a far greater scale. The best the Aztecs could do on a very good day was to rip the hearts of out of maybe 20,000 victims. According to Worldometers, by the end of March the world has already lost over 1.2 million people to smoking this year, and over 600,000 to alcohol. That's 20,000 human sacrifices every day. Just three months into the year, we have spent close to $100 billion on illegal drugs.

Surely we ought to be able to do something to stop the carnage. But idiots don't notice (or care much) when other idiots die. Prohibition doesn't work, and idiots will fight savagely to protect their jobs.

The German poet Schiller was all too perceptive when he wrote: "Mit der dummheit, kämpfen Gotter selbsts vergebens." Against stupidity, the gods themselves struggle in vain.