A decade ago, neatly coinciding with British Columbia's 37th general election, began one of the world's greatest-ever commodity booms. 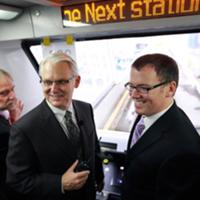 The province's newly-minted BC Liberal government, sworn into office in June 2001, was presented with an historic opportunity to reap windfall revenues from the development of British Columbia's abundant natural resources -- coal, copper, natural gas, forest products and the like -- and the economic activity associated with their extraction and export.

It did not happen.

Instead, the BC Liberals deliberately enacted massive tax cuts -- intended to benefit the province's wealthiest families and individuals, and most-profitable corporations -- and effectively knee-capped government revenues.

Today, the receipts generated by Victoria's Consolidated Revenue Fund (CRF) -- B.C.'s main financial account -- have sunk to a level not seen since the late 1960s/early 1970s.

And under the broader GAAP measurement, provincial revenues over the last decade have been in a near-constant decline, year after year.

Moreover, as a direct consequence of the BC Liberals' failed revenue policies, the province's most-vital public services -- protection for children, programs for seniors, the justice system, stewardship of our forests and other natural resources, health care and education -- have been slowly starved of funds.

Even worse, the much-touted economic objective of the BC Liberals' tax cuts -- a free-enterprise nirvana intended to attract newcomers and investment -- failed to materialize.

"The legitimate object of government," Abraham Lincoln once observed, "is to do for a community of people whatever they need to have done, but can not do at all, or can not so well do, for themselves -- in their separate, and individual capacities."

By the Great Depression of the 1930s, economists led by John Maynard Keynes of Britain were arguing that governments could play a broader and positive economic role by promoting full employment and smoothing out aggregate demand.

In British Columbia during the 1950s and 1960s, premier W.A.C. Bennett -- leader of the centre-right coalition called Social Credit -- oversaw a doubling of Victoria's CRF revenues to 15 per cent of the province's nominal GDP from approximately seven per cent.

CRF revenues continued to rise (albeit at a much-slower pace) after Bennett left office in 1972, and peaked at just over 19 per cent of nominal GDP in the early 1990s.

By 2001, when the BC Liberals won election to government, CRF receipts were down to an even 17 per cent of British Columbia's nominal GDP.

Ironically, concomitant with the dramatic, post-war growth in the size of B.C.'s government was a phenomenal boom in the province's economy.

Over the half-century between 1951 and 2001, British Columbia's population exploded to more than 3.9 million from less than 1.2 million -- the biggest increase in Canada during the period -- while nominal GDP skyrocketed to $133.5 billion annually from about $2 billion.

After a decade of assault, cupboards bare

Yet, at the end of the 20th century the BC Liberals -- Gordon Campbell, Christy Clark and Kevin Falcon, along with their wealthy patrons and corporate donors -- were complaining loudly that government was not a force of good, but of evil. The province's public sector, they said, was bloated, unproductive, too-expensive and needed to be cut down to size.

And so within 24 hours of being sworn into power on June 5, 2001, the BC Liberals launched an unprecedented attack on British Columbia's public revenues.

Today, CRF receipts -- as outlined in Falcon's 2012/13 budget -- are down to slightly more than 15 per cent of nominal GDP, a level not seen since W.A.C. Bennett left politics 40 years ago.

The results of the BC Liberals' decade-long assault on provincial revenues are illustrated even more clearly under GAAP (generally accepted accounting principles).

Dearth of reinvestment in BC

Of course, the loss of that revenue would be acceptable -- even laudable -- if the foregone receipts were re-invested in British Columbia's economy. They have not, and are not.

Consider that the province's corporate-income tax rate, which stood at 16.5 per cent before the BC Liberals took power in 2001, today is just 10.0 per cent. Profitable corporations, however, pay even less than that.

Falcon's budget shows that corporate profits will surpass $24.7 billion in 2012, yet Victoria's corporate-income tax receipts will come in at less than $2.3 billion -- or a mere 9.1 per cent of profits.

(And, of course, the corporation capital tax -- the means by which enormously profitable financial institutions paid modest sums to the provincial treasury -- was abolished by the BC Liberals in 2009.)

Have businesses re-invested their tax-savings in British Columbia?

No. In fact, capital investment in machinery and equipment -- a key indicator of business confidence -- has plunged over the last decade, dropping to just 5.3 per cent of nominal GDP in 2010 from almost seven per cent in 2001.

A decade ago, no one was more enthusiastic about the B.C. Liberals' tax-cutting plans than Christy Clark. "In every jurisdiction where personal income tax cuts have been tried, they've worked," she burbled in the legislature on Aug. 2, 2001.

"It's meant more revenue to government from personal income taxes. That's what we are going to create in British Columbia."

Well, so much for theory. In 2000/01, before the BC Liberals took power, the province's personal-income tax receipts represented 4.5 per cent of nominal GDP; Falcon's latest budget shows that the comparable number in 2012/12 is down to a mere 3.0 per cent.

Put another way, B.C.'s economy today generates just two-thirds of the personal-income tax revenues as compared to before the BC Liberals won election to government.

Today, as leader of the BC Liberals and premier of British Columbia, Clark seems bewildered by the province's weakened finances.

"It just doesn't add up," she blurted during question period in the legislature on Feb. 14, after being asked about lengthy court delays in the province's justice system.

(Clark falsely told the house that "More money has gone into the (justice) system." Provincial spending on the protection of persons and property in 2000/01 was 0.8 per cent of nominal GDP. In Falcon's latest budget for 2012/13, the comparable figure is a mere 0.6 per cent of GDP -- which represents a yearly loss in funding for justice services of a half-billion dollars.)

Is British Columbia today a better place because the BC Liberals have dramatically slashed government revenues?

Well, not only has capital investment in machinery and equipment been in decline since 2001 (and well below historic levels), but consider that our province's population growth has weakened dramatically over the last decade.

Worse, when examined in percentage terms, it is evident that the decade under the BC Liberals saw the province's lowest population growth since we joined Confederation in 1871.

The global commodity boom that began a decade ago gave the BC Liberal government a golden opportunity to build and strengthen British Columbia.

That's what W.A.C. Bennett did a half-century earlier, with policies that encouraged the development of both our public and private sectors.

Campbell, Clark and Falcon, however, deliberately chose to starve the government of much-needed revenues, thereby crippling public services. And despite billions upon billions of dollars in tax cuts -- as well as record-high corporate profits -- the private sector refused to respond with increased investment or job creation.

Sadly for the vast majority of British Columbians, the last decade under the BC Liberals represents a squandered opportunity of historic proportions.