The Zika fever outbreak across Latin America has scared millions and put intense pressure on their governments to deal with it effectively. Brazil has even put 220,000 soldiers into the streets -- not to keep order, but to pass out leaflets and check for mosquito breeding sites in people's homes. 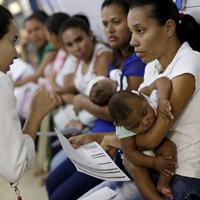 The scare isn't so much about Zika, which at worst causes a week of fever and aching joints (four out of five who catch it have no symptoms at all). It's about the new association between Zika and an apparent spike in cases of both microcephaly in babies and paralyzing Guillain-Barré syndrome in some children and adults. That has startled medical researchers into a race to confirm or refute Zika as the cause of those conditions, with no shortage of cranks loudly confusing the issue.

Microcephaly had never been a concern in Brazil; cases were considered rare, perhaps five per 100,000 live births, and the causes -- ranging from syphilis to various viral infections and even maternal malnutrition -- were well known. So when doctors in northeastern Brazil began to swap anecdotal evidence last August about unusual numbers of new microcephaly cases, that in itself was worth investigating.

At the same time, Zika was also spreading in the region and across Brazil. It was hard to test for, because it can be misdiagnosed as dengue or chikungunya. Doubtless many who caught it never bothered to see a doctor and recovered on their own. Some mothers of microcephalic babies reported having had a fever and rash during pregnancy, but only a handful still had Zika in their blood.

Still, Zika was the prime suspect, and researchers began to study it far more closely. At the same time, other scientists wondered what the point was when health authorities couldn't even decide on a standard definition of microcephaly and had no idea what the true rate was across the country.

This point was raised late in December by ECLAMC, a Latin American group studying congenital birth defects. It was a point soon taken up by Dr. Sandra da Silva Mattos, a pediatric cardiologist in the northeastern city of Recife who has a respectable list of publications on the uses of computers in dealing with children's heart problems.

Dr. Mattos had compiled a database on newborns in the neighbouring state of Para&iacuteba. She organized an unpaid team of volunteers to use that database to track down the head sizes of a large sample of newborns between 2012 and the end of 2015. Meanwhile, the World Health Organization had created a page on its website, Zika Open, to provide the world with new research findings as rapidly as possible.

Dr. Mattos's report was the first such finding, published on Feb. 4. By three different measurements of microcephaly, she reported, the numbers in one northeastern state had been much higher than thought, as early as 2012 -- well before Zika arrived. In fact, they pretty closely matched the normal microcephaly rates for the rest of the world.

By mid-February, meanwhile, Colombia was reporting over 30,000 Zika cases, 5,000 of them in pregnant women. But it had not confirmed a single Zika-related microcephaly case, though cases of Guillain-Barré syndrome had risen sharply. The same findings were coming in from other Zika hot zones: no microcephaly, but more Guillain-Barr&eacute. And thousands of terrified pregnant women.

Nevertheless, the meme of Zika as direct cause of microcephaly was well entrenched in the Latin American and world media. If this turns out to be a coincidence, it will be a deeply embarrassing one for Latin American governments (and the media that had accepted the meme as true).

Then the Zika narrative had yet another plot switch. A Slovenian woman who had lived and worked in the northeast Brazilian city of Natal for two years came home pregnant and feverish in October 2015. Tests soon showed she had Zika and a fetus with serious microcephaly. An abortion rapidly followed; the autopsy on the fetus showed Zika virus in its ruined brain, and nowhere else.

The report on this finding in the New England Journal of Medicine said that this "suggests a strong neurotropism of the virus" -- that it thrives specifically in fetal nerve cells.

This looks like strong evidence for the Zika-microcephaly link, but it's just one case. More evidence has been reported in the Brazilian media: researchers at the Federal University of Rio de Janeiro have found unexpected Zika-related brain damage in eight babies -- including some with no microcephaly.

"Increasingly, the presence of virus in the brain of these children shows that there is a correlation relationship," said researcher Rodrigo Brindeiro, "but correlation cannot be translated into causality, that is, it is not definitive evidence of the cause." And disturbingly, the researchers found severe brain injuries in babies with normal head circumference. "The child may be born with normal head size, and have drastic intracerebral changes," virologist Amilcar Tanuri said. So evidence is mounting, but the Brazilians, as good scientists, are still not jumping to conclusions.

Every serious outbreak also triggers an outbreak of cranks, and Zika has been richly endowed with them. One site denounced Zika as a "hoax," claiming a mosquito larvicide, pyriproxyfen, as the true culprit.

The Brazilian Ministry of Health has rejected this argument, rather than simply ignoring it. But at least one Brazilian state has "suspended" the use of pyriproxyfen, which has been used worldwide for almost 15 years with WHO's support.

Other reports blame genetically modified mosquitoes, released to breed harmless short-lived offspring, as the source. The English-language Russian news outlet RT has pushed this idea, though the mosquitoes in question hadn't been released near the hot zones, and Aedes aegypti doesn't travel far from where it breeds.

So, faced with a new problem, we tend to respond with old reflexes. Governments try to minimize the problem while bragging about their responses. People already convinced that someone is out to get them see the problem as just more proof. Some grab at the idea that two coincidental problems must be causally related; others want to check baseline rates of disease before jumping to conclusions.

Unfortunately, some scientists also resist the idea of "open data," made available as rapidly as possible to as many people as possible. They prefer to hang on to their data until it can be safely published, usually months after it's needed, and they can get the glory.

In the meantime, experts around the world are going online to study and interpret the available data. In the U.S., Columbia virologist Dr. Vincent Racaniello has chastised his colleagues for not sharing data: "Scientific research is not about you and your ego. It is about human health."

Australian virologist Dr. Ian Mackay has been blogging about Zika and microcephaly, interpreting what we know so far in ways the media hasn't always considered. And Maia Majumder, a PhD student in computational epidemiology at MIT explains data analysis for experts and laypersons alike.

With this worldwide online immune system joining the attack, we are likely to get to the truth of the Zika-microcephaly connection sooner rather than later. As Dr. Sandra Mattos told The Tyee in an email: "Data is pouring in and we learn new facts by the minute. CDC [Centers for Disease Control] and other groups have joined us in the search for conclusive answers. Hopefully we'll get to them in the near future."