On Sept. 5, 2007, I was involved in a near-fatal motor vehicle accident. I suffered many fractures, including four in my back and four in my skull. The accumulation of my injuries kept me hospitalized for several months. The chronic pain that I was left with was unreal. I was prescribed a combination of 320 milligrams of OxyContin daily as well as 100 milligrams of methadone daily. 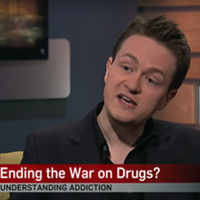 My physician at the time was of the opinion that the combination of the two drugs would be most effective and as a result I was given no other choice. This setup was working fine for three and a half years while I was attending physiotherapy.

One day, after being medicated at that level for such a long period of time, I had an argument with my pharmacist and my doctor felt the need to take punitive action. The next time I went to pick up my prescription, I was informed that I was cut off... cold! No one should ever be cut off cold from that amount of narcotic analgesic. I went through hell. All of a sudden I found myself not only self-medicating for pain, I was also deep in the throes of a violent withdrawal, the likes of which were previously unknown to me.

It was an ongoing, vicious grind of wheelin', dealin' and stealin' enough money to keep both the pain and the withdrawal at bay. During this time, I was pushing myself way beyond normal human abilities just to survive! I was wearing my damaged body down to such a weakened state that it was clear to me that to continue for much longer would definitely be the end of me.

I know of a great many people that have either found their way into addiction, or found their way back into addiction in this manner. After a serious injury, they are prescribed high doses of narcotics for a period of time. And when the narcotics run out, they are left with a habit. Throughout the time that I was going through this, I tried several times to put myself under the care of a new physician, to no avail.

No matter where I went, I had been labelled as "drug seeking." Of course I was drug seeking. I needed narcotics to kill my pain. I was also heavily addicted.

During that period I was cut off my medication. I ran into Kurt, who does research for SALOME, and he told me that there was a study upcoming that would be helpful.

I was very excited to hear that there was going to be a new study. Previously there was NAOMI (North American Opiate Medication Initiative). After that, SALOME (Study to Assess Long-term Opioid Maintenance Effectiveness), was the next chapter. It studied the effectiveness of prescribed diacetylmorphine (heroin) versus hydromorphone (dilaudid) for the treatment of chronic opiate addiction. There are a great many people who have had limited or no success with present treatment options. I am one of those people.

SALOME saved my life! Once I joined the study, for the first time in months I was able to take it easy. I was able to breathe! I was so run down by this point that I suffered a minor stroke two days after entering SALOME. I can't imagine surviving that if I wasn't able to take the rest that being part of SALOME allowed. Having my medication being properly prescribed for me was a life-saving relief.

SALOME was a double-blind study where half of the participants were given heroin, and the other half dilaudid. Nobody knew who was getting what, and the study measured the physical and the social benefits of each. The chemical makeup of both solutions is almost exactly the same. The study proved that they were both positive treatment options.

The task of administering the medications, as well as providing the necessary medical and counselling support, was in the very capable hands of the amazing people at Crosstown Clinic. Dr. Scott MacDonald is the heart of the organization. Although he is not my physician, I have been witness to him being an unwavering voice in support of the need for legally prescribed heroin for over a decade!

Dr. Cheryl McDermid is my physician at Crosstown, and she provides the very best medical support that I have ever had. The entire staff at Crosstown has treated me with the utmost care and respect. It has definitely been a positive change from what I was receiving previously.

Heroin is illegal in Canada but during the study it was allowed to be administered legally under "special access" granted by the government.

Once the study finished, [former] minister of health Rona Ambrose blocked our special access so that we could no longer receive heroin. At that time, we were all prescribed dilaudid and although this really helped manage my pain, I found that the heroin was much more effective for much longer periods of time. There is an ongoing court battle to make legally prescribed heroin available to all that need it.

The court date is in 2016. In the interim, our team from Pivot Legal Society went to court with Dr. MacDonald and several SALOME participants. We were granted temporary special access once again for all of the Salome participants. This allows us to be prescribed legal heroin at least until the court date.

No longer a criminal

With the study over, Crosstown is now home to the OAT (Opiate Assisted Therapy) program. As previously stated, it is only available to those who participated in SALOME at this time. Hopefully, the courts will eventually allow legally prescribed heroin for all that need it. All of the information collected from SALOME and available from studies and programs all over the world support this outcome. But it is in the hands of the Supreme Court of British Columbia. Many thanks to Pivot, Dr. MacDonald and all of the people that are supporting us in this fight.

The transformation that having legally prescribed heroin has had on my life is monumental. There has been such a dramatic change I am sure that there are people who don't recognize me. I now live in stable housing. I have had proper medical and dental support for some time now. I have put together my resumé as well as taken on several temporary and part-time employment positions, such as [street vending] the Hope in Shadows calendar and Megaphone magazine.

I have my life back, I have my self-esteem back, and I am no longer a criminal for dealing with my chronic pain! I am presently trying to acquire funding to open a coffee shop/gallery that supports and showcases local artists.

All of this is only possible because of the folks at Crosstown Clinic. They have literally saved my life! My deepest thanks to all of the amazing people that work there. I have been treated with absolute respect and dignity each and every time that I've interacted with them. It is very clear to me that they care.

I would like to add my very special thanks to the following people. I feel that you have gone above and beyond in your care for me and you hold a special place in my heart: Julie, manager; Cohen, social worker; Dr. McDermid; Jen, Stephanie and Jennifer, nurses; Aramis, Amanda and Patrick, reception. Thanks again for giving my life back!!