Prime Minister Stephen Harper has repeatedly claimed Canada is the largest per-capita refugee resettlement country on the planet, most recently at Monday's Munk debate. Aside from not being true, the statement insults nations like Germany and Sweden, who have opened their doors to tens of thousands. 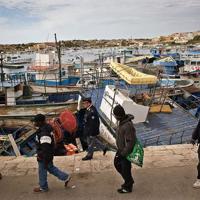 Ready to Confront the Greatest Mass Migrations in History?

But even those countries could take lessons from the mythical European nation of Ruritania. Invented by British author Anthony Hope in the 1890s, Ruritania has been little noticed. But it could still save the day and shame its real neighbours (including Canada) into doing the right thing.

The other day my wife and I caught a "cruise ferry" from Helsinki to Stockholm. Though far from its full capacity of 2,800 passengers, the ferry was carrying well over a thousand -- Finns, Swedes, Chinese, Japanese, Germans, Spaniards, and at least two Canadians. We had all bought tickets, registered, and gone aboard to assigned cabins. The next morning we were all off the ferry in a few minutes and dispersing smoothly and invisibly to our destinations in Sweden.

We were a microcosm of an enormous, worldwide industry: the transportation, shelter and feeding of hundreds of millions of tourists. In Europe alone, the tourism infrastructure can absorb millions in a year (and the industry is despondent if even a few of those millions fail to show up).

To give you some sense of scale, in 2014 the People's Republic of China alone sent out 107 million tourists -- 3.43 million of them to Europe. France got 620,000 of them, Italy 497,000, and Germany 397,000. Three and half million Chinese visited South Korea last year. When MERS broke out last spring, Chinese tourists stayed away and the Korean economy staggered.

Even the Chinese are a minority of the world's tourists. The World Bank estimates that in 2013 Croatia received close to 11 million visitors who stayed at least one night; Germany handled three times as many. (Canada, says the World Bank, had 16.5 million such visitors in 2013.)

So why are European countries either pleading lack of room for refugees, like Croatia, or humble-bragging their acceptance of refugees, like Germany and Sweden?

Ordinary tourists, of course, are transients, leaving little behind but empty beer bottles, unmade beds, and happy hoteliers. The new waves of refugees bring little money and need to stay in their refuges for a long time -- maybe forever.

European and North American governments generally responded to the refugees as a threat, until the photo of little Alan Kurdi forced them into a kind of sullen charity, scoring political points by the numbers they said they'd accept.

The Germans, at least, see the demographic benefits of a million new workers and students to support an aging population. But even the Germans have failed to recognize the scope of the refugee exodus, and its implications for the future. Like tsunamis, still more waves of refugees will arrive -- year after year, decade after decade.

The refugees are not just party crashers, spoiling everyone's fun; the party is over, and we in the West now face a moral crisis. And they are no threat to us and our present way of life. We are not simply one side in an imaginary clash of civilizations, but participants with the refugees in the struggle to build a new civilization altogether.

Consider what happens when a country finds itself suddenly at war. The time is past for recriminations over who's to blame; the question is how to preserve the country's institutions and people at a minimum cost in human life and suffering. To answer that question, governments receive (or seize) powers undreamed of in peacetime.

After Pearl Harbor, President Roosevelt effectively nationalized the U.S. auto industry; henceforth civilian car production ceased and the automakers would crank out tanks and jeeps and trucks. Corporate executives would do as they were told, and many served as "dollar a year men" in Washington, helping run the war effort with no recompense. FDR seized other commanding heights of the economy, the better to recruit, transport, train and equip his troops. Women left the kitchen for the assembly line. (German hausfraus stayed home, where Hitler thought they belonged.)

To save his country, Roosevelt transformed it. We will have to do something similar in Europe and North America to deal with this wave of refugees and those who will surely follow. Our transformation's goals would be not just the assimilation of a few hundred thousand refugees, but also the creation of institutions and system to assimilate millions more.

Let's suppose that the mythical European country of Ruritania found itself overwhelmed with refugees this summer, many hoping to move on to Germany or Scandinavia.

The prime minister, a very smart lady and a former history professor, declared a national emergency and invited the opposition parties into a coalition government. She then nationalized the Ruritanian tourism industry. All hotels cancelled reservations for ordinary tourists, clearing space for refugees and government officials to house, screen, and register them. (Some German hotels were taking in refugees by the end of September). Bus and rail companies were now government services, with refugee transport their top priority.

So refugees were met at the border and brought to hotels in various towns. They got clean rooms, decent food, and medical attention for themselves and their children. Working with translators, Ruritanian officials interviewed every adult and unaccompanied child. Almost all passed their screening and got a choice: Catch a free ride to the German border, or stay and begin the process of becoming a Ruritanian citizen.

If they chose to stay, refugees remained in their hotels while taking crash courses in Ruritanian language and culture. Their children were enrolled in Ruritanian-immersion schools. Adults signed up to train in a wide range of job skills and were assigned to apprentice positions to gain local job experience. Refugee health care workers were put to work in hospitals and reception hotels. Many refugees went into construction, building new permanent housing for their own families before winter.

When her opponents objected to this very expensive welcome, the PM asked them if they'd rather pen up the refugees like stray dogs, draining the exchequer while gaining the country no net benefit. Then she borrowed and spent still more, citing Pope Francis's radical remarks to the U.S Congress: "We need to avoid a common temptation: to discard whatever proves troublesome. Let us remember the Golden Rule: 'Do unto others as you would have them do unto you.'"

The PM set up a headhunting program to recruit speakers of refugee languages as well as academics familiar with the refugees' cultures. Apart from enabling her to offer better services, the recruits were charged with helping to develop a new Ministry of Demographics, Immigration and Assimilation -- which will eventually become the key agency dealing with future waves of refugees.

And those waves will assuredly come. Boko Haram will drive much of sub-Saharan Africa to the shores of Libya. Syria and Iraq are unlikely to exist in their present forms by this time next year, and their citizens will seek new homelands. South Asia will send migrants from Sri Lanka, Bangladesh, Afghanistan, and Myanmar.

As climate continues to change, drought and flood will deprive hundreds of millions of a living. The default response will be political turmoil and still more Boko Harams and Islamic States, aggravated rather than resolved by Western interventions. Latin America will suffer a similar fate.

Flight of the brightest

Those who head for Europe and North America will be the brightest and most resourceful; most of their poorer fellow-citizens will die in their homes or at best reach refugee camps in the nearest country. Stunting -- reducing children's physical and mental growth through malnutrition -- will become the normal fate of stay-at-homes.

The Ruritanians know they will have some hard times with their refugees. Fathers will struggle to maintain their self-respect while working in menial jobs. Mothers will endure harassment from young Ruritanian jerks who don't like the colour of the refugees' skin. Refugees, with a good supply of their own young jerks, will get into punch-ups that do them no political good.

Still, Ruritania will do all right. By pumping millions into post-secondary education, the PM will make her country's universities attractive to other nations as well. Refugee teenagers are already going into universities and colleges, sustaining employment for the professoriate and support staff. The sheer quantity of sharp young refugees (many already well educated) makes them attractive to employers and investors across the European Union.

So the deficits incurred in absorbing the refugees will soon be paid off -- part by foreign investment and partly by renewed tourism.

A lot of those tourists will be officials in EU and North American governments, hoping to learn the secret of the Ruritanians' success.