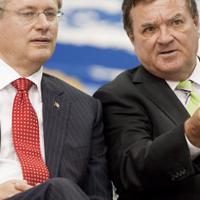 Flaherty's Legacy: The Good, the Bad, and the Ugly

Much will be made of this accomplishment. Indeed, the government reportedly has set aside $7.5 million to promote just how great it is to Canadians.

A closer look at the country's finances, however, raises a simple question: why all the fuss? The budget is a thin slice of the Canadian economic pie, and interest costs on our debt are shrinking to near-giveaway size. Ottawa is just one of three government levels, and taken as a whole our government spending is very much under control. And once we've actually "balanced" the budget, where do we go from there?

Let's take a closer look at each of these points.

1. The federal budget is a very small share of the Canadian economy.

In very round numbers, Ottawa's revenues this year will be in the range of $290 billion. Program spending likely should come in at $260 billion or so, to which must be added another $30 billion in interest costs to service our federal debt.

Overall, both revenues and expenditures will be nearly identical (at about $290 billion) with the former slightly higher than the latter.

Consider, however, that Canada's nominal gross domestic product in 2015 is expected to be approximately $2 trillion. That's 2,000 billion dollars.

Viewed in this light, the federal government's budget -- revenues flowing into federal coffers, and expenditures flowing back to Canadians -- represents just 15 cents for every $1 generated by Canada's economy.

This amount is not insignificant. By comparison, each of the country's largest private-sector companies -- The Royal Bank of Canada, Magna International and Alimentation Couche-Tard -- should have revenues in 2015 of roughly $34 billion, or only about 12 per cent of the monies sent annually to Ottawa.

So, yes, the federal government is big, but not that big.

More to the point, the impact on Canada's macro-economy of a small fiscal surplus (or even a tiny deficit) is almost infinitesimal.

The budget will show the federal government's "interest-bearing debt" in 2015/16 is in the ballpark of $900 billion.

It is, admittedly, a big ballpark and growing. Back in 2006, when Stephen Harper's Conservative Party won its first minority government, the comparable number was just $600 billion.

Which means the federal debt -- the financial liabilities on which Canadians are paying interest -- has increased by a remarkable 50 per cent since the Tories took office a decade ago.

Yet, the approximately $30 billion we'll pay in interest costs in 2015/16 is far, far less than the record interest charges of $49.4 billion recorded two decades ago -- way back in 1995/96 -- when the interest-bearing debt was much lower.

How is that possible? How can interest expenses be less today than they were 20 years ago, even though our debt has nearly tripled in size, from $343.3 billion to approximately $900 billion, in the intervening years?

It's because the average rate of interest Ottawa paid on its outstanding debt in the mid-1990s was eight per cent. This year, the comparable rate will be a rather puny three per cent -- and it's dropping.

Clearly, it's becoming less and less costly for the federal government, and Canadian taxpayers, to service the country's debt, even though it has risen ever higher.

All of which means the monies we'll save by eliminating the deficit also are infinitesimal.

3. Ottawa is one of three levels of government in Canada.

We all know there are three levels of government in Canada, and only one -- yup, Ottawa, with its balanced budget -- has got its fiscal house in order.

It is vital, some might argue, that the feds run a surplus to offset the negative effects of all those profligate, big-spending administrations at the provincial and municipal levels, and nudge them to adopt more fiscally-conservative principles and policies.

There is a kernel of truth in this. While Ottawa's budgetary finances represent just 15 per cent of the nation's economy, the combined revenues and expenditures of all three levels of government push up that number for the country as a whole.

On top of the federal government's spending of about $290 billion this year, we have to add at least $425 billion in combined expenditures for all 10 provinces, plus another $150 billion for local governments.

In total, Canada's three levels of government in 2015 will spend approximately $865 billion.

The revenue side of the equation, however, is generally weaker. That's because Canada's provinces, in toto, remain in the red.

This surprises no one who has followed Ontario's ongoing fiscal woes (a likely shortfall in 2015 of about $10 billion) or Alberta's sudden plunge into deficit territory (at least $5 billion this year).

More importantly, nearly all provincial governments are in the same boat because those that declared "balanced" budgets this year did so largely with accounting gimmickry -- see British Columbia and Saskatchewan -- or dubious fiscal projections, a la Quebec.

To get a clearer picture of the total fiscal and economic size of all three levels of government in Canada, let's consult an independent source, the Organization for Economic Co-operation and Development.

For 2015, the OECD forecasts that spending by Canada's "general government" -- which counts all three levels of public administration -- will equal 39.7 per cent of the country's nominal gross domestic product.

General government revenues, however, add up to just 38 per cent of the national economy, which leaves an OECD-calculated deficit of 1.8 per cent of GDP.

Again, Canada's gross domestic product this year is estimated to be in the order of $2 trillion. This year's shortfall for all three levels of government, therefore, will be about $36 billion.

That is a sizeable amount of red ink. Again, however, when viewed as a proportion of the national economy it's actually less than two cents -- $0.018 -- for every dollar of GDP.

And to repeat the point made earlier, interest rates are falling to all-time lows. (Yes, even for the provinces.)

4. Canada's finances are exemplary in comparison to other nations.

It's clear that Canada's finances -- counting not just the federal government, but all three levels of public administration -- look pretty darn good when examined against those of other countries.

To repeat a point made earlier, the OECD calculates that total general government expenditures in Canada in 2015 will be 39.7 per cent of nominal GDP.

The average level of public spending across the 31 countries surveyed by the OECD is 41 per cent, or 1.3 per cent higher than in Canada.

Looked at another way, just six OECD nations -- Australia, Estonia, Ireland, Korea, Switzerland and the United States -- spend less than Canada does on public services when government outlays are measured as a share of their respective national economies.

In the Euro countries, the average of public sector spending is 48.8 per cent of GDP, 9.1 percentage points higher than in Canada.

Among the so-called G7 countries -- the world's largest industrialized nations -- the average of general government spending is 44.8 per cent. That's 5.1 points higher than in the Great White North.

Moreover, balanced budgets have been extremely rare among OECD nations since the 2008-09 global financial meltdown.

In 2015, for example, 26 of the 31 countries surveyed will be in the red. (The exceptions are Germany, Luxembourg, New Zealand, Norway and Switzerland. Again, this is for 'general government' finances, so Ottawa's shiny-new balanced budget will be offset by provincial shortfalls.)

As for Canada's debt -- 'net financial liabilities' in OECD parlance -- our nation's obligations in 2015 stand at 41.3 per cent of GDP. The 31-country average is considerably higher at 71.4 per cent.

Indeed, among the G7 nations, Canada and Germany are tied with the lowest public debt as a portion of GDP, while the United Kingdom and the United States come in at 65.9 per cent and 85.9 per cent respectively. Italy is at 122.7 per cent, and Japan sits at a scary 146.8 per cent.

Is there an answer to the question as to why Canada -- or, at least, the Harper government -- is so fussed about achieving a balanced budget on April 21? Two come to mind.

First, the Conservatives long ago promised to balance the books this year -- an Election Year, by the way -- and, gosh darn it, they're going to do it.

Politicians often are accused of over-promising and under-delivering. The Tories promised a balanced budget, and now they can claim to have delivered.

The second answer is even more prosaic. The fact is that we, the general public, have precious few ways to measure the performance of elected officials. Are they competent, or not? Do they deserve re-election, or the boot?

To remedy that problem, Canadian politicians, especially those who serve in government, assert that the hallmark of efficient administration is the absence of a deficit.

The Harper Conservatives adhere to this theory: in addition to a balanced budget on April 21, they have also has promised legislation to make federal surpluses mandatory in the future.

But is that really the sole distinguishing feature of good governance?

Of course not. We expect more from our elected representatives than a laser-like focus on the bottom line.

For example, does the party in government -- or those on the opposition benches who seek to replace it -- have the correct spending priorities? The administration of our country ought to be both competent and compassionate. Is it?

To repeat a point from above, only six of the 31 OECD nations spend a smaller portion of their respective economies on government services than does Canada.

Does that mean Ottawa's doing too little, or should public spending be cut even further? If the answer is the former, what are our priorities for the future?

Does the government collect revenues in a fair manner? Should some pay more in taxes, and others, less? Is Ottawa taking in too much, or not enough?

So, yes, Canada will have a balanced budget on April 21.

With that out of the way, perhaps Canadians will focus on more important issues in the months leading up to the general election on Oct. 19.

Here's one: where do we go from here?