Alberta Oil magazine just published its national survey on energy literacy, the culmination of 1,396 online interviews of a representative sample of Canadians conducted by Leger. 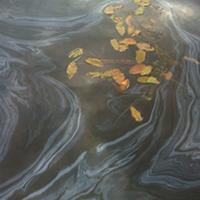 'I Was a PR Campaign': Oil Cleanup Worker

The results are particularly interesting coming from Alberta Oil, a magazine destined for the desks of the energy sector's senior executives and decision-makers.

Summing up the survey's findings, Alberta Oil editors wrote that opposition to energy projects is ''not just for West Coast hippies anymore.''

Indeed. There are quite a few nuggets in the survey's findings that are probably causing a headache or two in Calgary's corner offices this week. We round up the top five.

Opposition to the proposed Kinder Morgan Trans Mountain pipeline is just as serious as opposition to Enbridge's proposed Northern Gateway pipeline -- if not more so, according to the survey.

What's more, the more highly educated citizens are, the less likely they are to support Trans Mountain or Northern Gateway. Perhaps the anti-pipeline crowd isn't all unemployed hippies after all?

Fewer than one in 10 post-secondary graduates find oil and gas industry associations credible and trustworthy when it comes to carbon emissions.

That shouldn't come as a huge surprise given industry associations like the Canadian Association of Petroleum Producers have fought new greenhouse gas regulations and successfully lobbied to weaken Canada's environmental laws.

While British Columbia has thus far been the focal point of Canada's pipeline debate, the strongest opposition to the oil and gas sector is actually in Quebec.

That's going to have big ramifications for the proposed Energy East pipeline that would theoretically transport bitumen across that province. When asked to think of the oil and gas sector in Canada and select words that come to mind, 51 per cent of Quebecers came up with ''environmental disaster.''

5. Literacy… in what language?

The editors at Alberta Oil do some hand-wringing about Canadians' lack of “energy literacy”… although literacy in this case appears to be defined as the ability to answer somewhat obscure pro-industry questions.

Take the multiple choice question on how much more carbon intensive the oil produced from Alberta's oilsands is than the average grade of U.S. crude on a well-to-wheels basis. Only 5.6 per cent of respondents chose correctly. Hold on… hasn't there been a raging debate going on for the past few years on oilsands' emissions intensity?

The good news is very few Canadians can spew out the precise answers industry wants to hear. Oil execs probably aren't stoked that their multi-million dollar public relations campaigning appear to be falling on deaf ears.