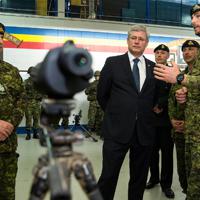 Please Advise! Which Ministry Should Fantino Embarrass Next?

I work at McDonald's for $10.25 per hour. How can I make ends meet in expensive Vancouver?

Financial advice is not really my area. But the Globe and Mail has a regular feature called "Financial Facelift" where they give advice to people with money troubles. Let's see what the Globe experts have to say about surviving in Vancouver. Obviously they can't answer your letter directly, WP, but they do answer similar queries. Most recently they answered one from a couple named Eric and Ilsa. They live in Vancouver just like you, WP. And just like you, they are feeling the pinch.

To summarize the couple's situation as described to the Globe: Eric is a 41-year-old physician and Ilsa is a 39-year-old dentist. She's on maternity leave, which reduces the couple's earnings. I know you can relate to that, WP. Ordinarily the couple gets by on $450,000 per year, but during this trying time it's down to $360,000. On that they must send five children to private school. They recently purchased a plot for $1.1 million and hope to build a home large enough for the children and a live-in nanny. For now, though, they are living rent-free in a home owned by a relative. (Let's pause here and acknowledge the essential goodness of human nature -- people who see others struggling and stoop to offer a hand. Bless you, anonymous relative.)

How many days do you work, WP? If it's one day a week like Eric, that means you're bringing in $328 a month. After you pay the live-in nanny that certainly doesn't leave much.

"Two professionals should be able to afford a modest house," Eric wrote to the Globe, "but we can't get the numbers to work and would appreciate some help."

I just hope they don't get desperate and do something rash. Should they steal a loaf of bread, Inspector Javert will give them no rest.

Checked the couch yet?

My suggestion for Eric and Ilsa is that they check down the sides of the living room couch -- that ought to bring in at least another $300,000 (they seem careless with money). I'm told selling cadavers is also lucrative. Another idea: rather than sending the children to private schools, Eric and Ilsa might apprentice one to a cobbler, and leave the rest with a scruffy but colourful gang of pickpockets. Ilsa could also cut her mat leave short by stuffing that infant into a basket and floating it downriver into the bulrushes. That's been known to pay off big. (First though, make sure you can spot a bulrush.)

But instead the Globe's "Financial Facelift" team suggested that Eric should solve the family's problems by working longer hours. That could work for you too, WP. For example, you could raise your income to $150,000 a year simply by working 1,220 hours per month. Ask your shift supervisor about it. You might also try to find out the name of Eric and Ilsa's relatives -- they seem nice. Maybe they have an empty garden shed or broom closet. If people squeezing by on $360,000 a year can't be expected to pay rent, then surely you too deserve a break, like the song says.

Failing that, I'm not sure what to tell you, WP -- except that we're holding a big bake sale for Eric and Ilsa next week at the Legion Hall. Maybe you can steal a loaf of bread.