This is scarcely a novel idea, but I suspect that the federal election this fall will have a new serious player: the Green Party. The Greens have long been a factor, but they haven't gained any traction until recently. 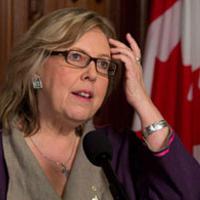 A couple of caveats.

I don't know the impact of the Greens east of the Rocky Mountains, however I suspect it's nil in Alberta where the ravages of the tarsands are of no consequence if there's money in them. Anytime I muse about B.C. separating and joining with Alberta I become an instant nationalist. I'd rather be allied with 19th-century Alabama.

I don't know about Saskatchewan nor Manitoba, but I suspect that there will be some appeal in Ontario, if only because of the proposed eastern pipeline. Quebec has taken a very tough stand against fracking for natural gas and is scarcely afraid to swim against traditional electoral currents. How "green" does that make them, I wonder?

This must be said. Traditional parties are all on uncertain ground in central Canada, and that's always a prescription for surprise. Except for the far right and, I suppose, the union movement, the Greens not only don't scare anyone much but look like a reasonably safe place to park a vote -- for this time anyway. What the hell, they can't be worse than the other choices, now can they?

This leaves the Atlantic provinces, an unknown quantity to me, but one suspects that gobs of oil money will "brown" the Greens there.

Obviously the Greens have done something right to move from where they were in 2011 to where I think they are now. Much of it has to do with leadership shown by Elizabeth May. She did her party a great deal of good with her Canadian bestseller Who We Are, Reflections on my Life and Canada. She's become known to ordinary Canadians, not just loyal disciples, and doesn't look too scary. Politically, this is of crucial importance when traditional loyalties are soft.

In British Columbia, with the strongest Green Party, Dr. Andrew Weaver has also shown leadership and, more importantly, brought awareness and respectability to the party. It helps that he doesn't scare anyone either.

Adriane Carr, in showing that she is not just an environmentalist but able to take a leading role in day-to-day government on Vancouver city council, has also helped soften the image that the Greens are a one-issue movement. While Carr is one of my favourite people, she is not necessarily my favourite politician since I hold her responsible for the STV referendum failing in 2005. Had she as leader of the B.C. Green Party shown enthusiastic support from the outset, I believe it would have passed.

Having said that, Carr is an increasingly skillful and popular politician. As the leading vote-getter last November in the Vancouver council race, she has given the Green Party much-needed credibility.

A danger of political punditry is seeing things through the prism of your own constituency. Mine is West Vancouver-Sunshine Coast-Sea-to-Sky, which covers every possible political demographic. We're represented by a Conservative and, outside of West Vancouver itself, he has become very unpopular by supporting liquefied natural gas plants.

While much of the area is small "c" conservative, the animus against an LNG plant in Squamish has united people. Even in West Vancouver, to the horror of the MP and his masters, the council twice voted unanimously against the proposed LNG facility, in spite of the MP's intervention. Concerted Tory efforts to defeat councillors in the November election failed miserably.

This raises what I think is the important question. In years past, many people whom I know throughout the constituency would rather have been found in a house of ill fame than part of a meeting supporting environmentalists. But this has dramatically changed, and people I once knew as staunch Socreds are now leaders against LNG development, pipelines and tankers, and now openly Green in their politics. Is this happening elsewhere, I wonder?

A different breed of MP?

The Green Party has another plus. More and more Canadians are coming to realize that government MPs are no more than highly paid lickspittles doing precisely what they're told. They pretend to be busy little bees on their constituents' behalf, but the most cursory examination shows this to be rubbish. My own MP, in nearly eight years, has never uttered a single word of criticism of any statement or action by the Tory government.

I suspect that the same is true of government MPs right across the country. People are fed up with this. The growing support for proportional representation supports this view. Many people feel that a Green MP would speak out and express their opinions. That mightn't win any jackpots, but at least voters would feel they were part of the process. If nothing else, it would be a good start.

Because of its diversity, British Columbia is no slam dunk for the Greens. Many on the North Coast drool at the thought of pipelines and LNG plants, while such are calls to the barricades in the south. But the Greens should elect some MPs on the Lower Mainland and especially on Vancouver Island.

Since the days of Trudeau, the Tories have had a solid base. How much of that base has been alienated by Stephen Harper is an interesting speculation. Will the Interior and Peace remain loyal, especially with the Site C dam approval?

The federal Liberal leader doesn't have the magic name in B.C. that he evidently has in Ontario. Nevertheless, B.C. is essentially a small "l" liberal province, driven away from the Liberal party by policy rather than philosophy. Will dislike of Harper translate into votes for the son of the hated Pierre, who probably isn't as hated in death as he was alive?

The NDP has its base and has been strongest of the major parties on the environment. But Thomas Mulcair looks and sounds so... eastern!

While it's early days, I'll venture this prognostication. The Greens will do substantially better than last time, and that doesn't have to be terrific to be effective. In fact, I'll go so far as to predict that they'll hold the balance of power after next November.

If I'm right, at least there'll finally be something happening in Ottawa of interest to British Columbians.