Ebola seems to induce strange, self-destructive behaviour in some people. When they know they've been exposed to it, they sometimes escape from the treatment centres where they have some hope of survival. Or they board an airplane from Monrovia to Lagos or Dallas, spreading the outbreak when they should have known how dangerously they were behaving. 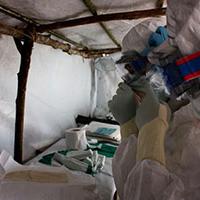 Worse yet, you don't even have to come down with Ebola to start acting against your own best interests. "Ebolanoia," the irrational fear of Ebola, is spreading fast across North America -- first to the American public and some state governments, and now to Canada and the Conservative government.

Ebolanoia was coined by American science writer Maryn McKenna to describe the overreaction of many Americans to the arrival of the first cases: American healthcare workers repatriated from Liberia. But Ebolanoia really got going when a young doctor recently returned to New York from a stint in Liberia working for Medecins Sans Frontieres (MSF).

The doctor, Craig Spencer, knew perfectly well that he might be infected. He knew it might take as long as 21 days (or as little as two) for Ebola to incubate. He understood MSF's protocol for self-monitoring and he followed it; the organization has an enviable infection-control record in the Ebola hot zone, but some of its staff have contracted the disease and died of it.

While checking his temperature twice a day, Dr. Spencer returned to his New York life, which included riding the subway and hanging out in a Brooklyn bowling alley. When he woke up one morning feeling ill and saw he was running a temperature, he contacted MSF and was then whisked into isolation at Bellevue, New York's designated Ebola centre. Too late! Ebolanoia was already spreading among his fellow New Yorkers.

Next an MSF nurse, Kaci Hickox, arrived back in the US from Sierra Leone. On her arrival in Newark, New Jersey, she had no temperature but was held anyway. A few hours later, when she was both exhausted and upset, they took her temperature with a forehead scanner and it registered a mild temperature.

Ebolanoia raced through the New Jersey government, especially the governor's office. Hickox was placed in seclusion in a tent erected inside a hospital structure, with a portable toilet but no shower. And there she stayed for several days while New Jersey governor Chris Christie and his New York colleague Andrew Cuomo improvised mandatory 21-day quarantines for anyone arriving at Newark or JFK airports from Ebola-hit countries.

Politicians don't make up public health policy by the seat of their pants unless they sense popular support for such a move. Moving through both the mass media and Twitter, Ebolanoia went viral. Strikingly, conservatives seem more vulnerable to it than liberals. Some tweeters dismissed Hickox's protests, pointing out she was a registered Democrat.

Others saw President Obama conspiring to import Ebola to the U.S., and #Obola became a hashtag. One neo-Nazi tweeted: "No white lives should be lost fighting Ebola in West Africa. Quarantine Africa. Let the blacks deal with it."

The world's public health experts responded by giving Christie and Cuomo a massive dose of science. Perhaps the most devastating response was an editorial in the New England Journal of Medicine that concluded: "We should be honoring, not quarantining, health care workers who put their lives at risk not only to save people suffering from Ebola virus disease in West Africa but also to help achieve source control, bringing the world closer to stopping the spread of this killer epidemic."

Faced with such doctors' orders, the governors retreated, at least to the extent of allowing Kaci Hickox to return home to Maine -- where she promptly refused to stay indoors in quarantine.

In fairness, the federal government hadn't given them a consistent policy to follow. The Centers for Disease Control has also been improvising, and its crisis communications strategy has been embarrassingly weak. CDC head Dr. Tom Frieden blamed the nurses in Dallas for contracting Ebola because they hadn't followed the protocol; the hospital's other nurses blasted back that there was no protocol. All this made the public a pushover for more Ebolanoia.

Governments rarely respond as smoothly as they should to new health threats, or HIV/AIDS would not have been a world pandemic for 30 years. But Ebola -- the real disease -- has revealed not just a lack of protocols but a failure of imagination among politicians and medical experts alike.

That's why Australia's Prime Minister Tony Abbott simply decreed that no West Africans would henceforth be granted visas. Perhaps he was annoyed because he'd offered MSF a couple of million dollars and been turned down; the hot zone needs healthcare workers, not money.

And quarantines and travel bans are precisely what keep those workers from going.

The Twitter-using public went really Ebolanoid after Thomas Eric Duncan arrived from Liberia and fell ill in Dallas. His hospital badly mishandled the case. Two nurses caring for Duncan contracted the disease -- and one was allowed to fly back to Dallas, with a low-grade fever, from a weekend trip to Akron, Ohio. (Both have since recovered.)

By now Ebolanoia has become a major theme in the U.S. midterm elections. Several other states have ignored the CDC's advice and established their own quarantine rules. Even a contingent of U.S. troops, returning from building hospitals in Liberia, are in isolation in Italy for 21 days before being allowed home.

Ebolanoia also shows a cultural gulf in North America quite as wide and deep as the gulf between illiterate West African peasants and their ruling elites. American health experts are seizing on every case that comes their way and they’re learning fast: of nine U.S. cases so far, only Thomas Eric Duncan has died. Meanwhile, scientific articles are appearing almost daily, bringing forward the latest data from West Africa.

But the public and much of the media, in the grip of Ebolanoia, couldn't care less, or Kaci Hickox's bike rides wouldn't be breaking news.

With so many voters wanting the drawbridge raised and the moat re-stocked with alligators, American politicians are listening. Every time a suspected Ebola case is isolated, we should recall the wisdom of Dr. Bill Foege, who devised the strategy that wiped out smallpox: "When the governor of New York says he is instituting quarantine out of an abundance of caution, most can read the real reason as an 'abundance of politics.'"

Then Ebolanoia crossed the border on Oct. 31, when Immigration Minister Chris Alexander raised our drawbridge by suspending visa applications from residents and nationals of Guinea, Liberia and Sierra Leone. This step flouted the International Health Regulations, which Canada has signed and which permit free travel to and from countries unless the World Health Organization issues a travel advisory. The last time it did so was for Toronto during the SARS outbreak in 2003.

Meanwhile, the real victims are suffering and dying in growing numbers. The latest report from the World Health Organization counts 13,703 Ebola cases and 4,920 deaths, as of Oct. 27. Counting from Sept. 28 to Oct. 27, 6,546 West Africans contracted Ebola and 1,590 died from it. In other words, half of all Ebola cases, and a third of all Ebola deaths, occurred last month.

New emergency treatment centres are being built, but who will staff them? North American doctors and nurses will be reluctant to volunteer when it means a forced three-week quarantine. The Europeans may feel similar political pressure, even if it's medically pointless.

One recent article finds that even confirmed Ebola patients don't shed the virus until the third or fourth day after they begin showing symptoms. In another report, the authors write: "We find that a combined approach of case isolation, contact tracing with quarantine and sanitary funeral practices must be implemented with utmost urgency in order to reverse the growth of the outbreak."

But who will do the immense work involved? The West Africans can do much of it but they need international support: personnel, logistics, intensive training and reliable salaries. MSF volunteers rotate out of West Africa every four to six weeks; they can't physically or emotionally endure much more hand-to-hand combat with Ebola. We will need thousands of international volunteers at any given time, with more thousands waiting to replace them.

Failing to provide such support would be to allow Ebola to become the social equivalent of flesh-eating disease, consuming communities and even whole nations.

And that support will have to be long-term. While the West offers only stopgap assistance, China last month said it is prepared to build an entire healthcare system for Liberia -- the only permanent solution to that country's horrendous health problems.

If the Chinese follow through, and we stay behind our raised drawbridge, we'll be the self-destructive victims not of Ebola, but of Ebolanoia. We are unlikely to find a vaccine for a disease you give yourself.