This weekend, the Vancouver Sun reported that Alberta billionaire Murray Edwards helped organize a $1-million fundraiser for the BC Liberal Party at the Calgary Petroleum Club last year. Rapidly becoming a household name in B.C., Edwards is the controlling shareholder of Imperial Metals, which operates the Mount Polley mine. 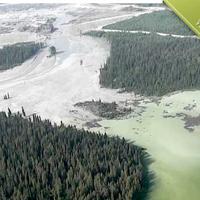 Putting aside that the cash was raised in another province and likely from folk who can't vote in B.C., Edwards' political generosity didn't stop at selecting canapés for his oil and gas pals.

Since 2005, Imperial Metals has donated at least $149,890 to the BC Liberals. With a win, place and show wager, that total includes $2,500 to each of the leadership campaigns of Christy Clark, Kevin Falcon and George Abbott. It also tossed $3,000 into the kitty for Bill Bennett's 2009 re-election campaign.

Mount Polley got in on the action as well, with the mine topping up donations to the Liberals by $46,720.

Now, every single cent of those donations could simply be because Edwards is a swell guy and Imperial a swell company. But that won't wash away what some call the sewer scents of B.C. politics from Edwards' largesse. Particularly since it's not just the totals that stand out; it's the timing of the gifts too.

Nearly half of Imperial Metal's donations were made after Christy Clark was sworn in as premier, while $45,720 of Mount Polley's donations came via six separate cheques issued in one week alone in March 2013. Guess bank charges weren't an issue for the company.

'People are willing to pay for certainty'

All of which is why the Oct. 2012 presentation of Byng Giraud before B.C.'s Standing Committee on Finance and Government Services is so fascinating.

Giraud -- then vice-president, corporate affairs at Imperial Metals -- called on the B.C. government to retain the flow-through tax credits for the exploration industry, to keep the PST off capital investments for mining companies and, most importantly, to reduce the approval process for a new mine from upwards of 10 years to as little as three.

As he noted to the committee: "I think if we're really looking for some flexibility on budget in terms of the mining sector, there is perhaps some wiggle room, but it needs to be in the context of 'I'm going to build a mine in three years, so maybe I'll tolerate those additional tax rates.' People are willing to pay for certainty and for time."

Lo and behold, six months later the BC Liberal Party was promising voters that it would streamline the mining application processes, work with the federal government to ensure mining projects undergo only one environmental review process, and that it would extend the new mine allowance and other credits allowing new mines and mine expansions to receive depreciation credits of up to 133 per cent to 2020.

This past January, in a speech to the B.C. Association for Mineral Exploration, Premier Clark took it further, promising a review of B.C.'s environmental assessment office to make it "more effective and efficient," claiming that "over the years, the environmental assessment process has gotten so long, so difficult and so complex that communities, proponents, can't get a yes, can't get a no."

Incentives to cut down assessments

Flashback to 2012 and consider what Giraud said then: "I know that if we could get these down to three to five years -- for yes, no or whatever, instead of the long maybe -- then there would be incentive for people to throw more money at these things."

This past June, Clark issued new mandate letters to each cabinet minister. In Bill Bennett's letter, she congratulated him for extending the flow-through tax credit program through 2014 and for reducing red tape for the mining industry. His mandate now includes working with the Finance ministry to extend the new mine allowance and other industry credits to 2020.

Oh, the PST still doesn't apply to capital investments for mining companies either.

There was one last thing about Giraud's presentation that jumped out. Arguing his case for a shorter approval process, he claimed: "Nobody trusts experts anymore from an NGO or from a third party, saying: 'You know what? We don't trust what you've done.'"

After Mount Polley, that can be marked down as famous last words.