We are approaching a milestone in the development of the Metro Vancouver region's transportation system. A deal has been reached, somewhat grudgingly, between Minister of Transportation and Infrastructure Todd Stone and the Mayors' Council on Regional Transportation, comprised of all the mayors in Metro Vancouver. The minister has offered the mayors greater control over TransLink and one-third of the capital cost of the major transit projects under consideration -- plus the Pattullo Bridge replacement. 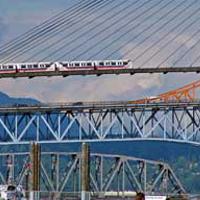 He has challenged the mayors to produce, by June 30, 2014, a vision for transportation: "Clear, detailed, fully costed, with specific priorities and project phasing." If new transportation revenue sources are included in that vision, they must be the subject of a region-wide referendum to be held no later than June 2015.

For more than five years, the Mayors' Council has been seeking new transportation revenue sources, so a referendum is almost a certainty. This raises two questions: What kind of transportation do the region's residents want? And how would they like to pay for it?

Some interesting information on these two questions is to be found in the results of the Urban Futures Survey 2012, an in-depth probe of the views of the region's residents on a wide range of livability subjects conducted by PlaceSpeak, a Vancouver-based social enterprise.

The survey was conducted under the sponsorship of Lambda Alpha International Vancouver Chapter with financial support from the Real Estate Foundation of British Columbia, the Cities of North Vancouver and Surrey, TransLink and Vancity. It was a replication of earlier surveys conducted in 1973 and 1990 by the late Dr. Walter Hardwick. The full results of the survey (including comparisons with earlier surveys) are available online here.

It will come as no surprise that the region's residents see transportation as one of the most important challenges we face. "Traffic congestion" rated second only to "Provision of health care," surpassing "Increasing housing supply" and "Homelessness."

It is open to question whether this is a real or perceived problem, in that fewer than half of the respondents (44 per cent) agree with the statement that "I frequently experience severe traffic congestion." Perhaps the Chinese water torture of traffic reports every 10 minutes on the radio or the all-day traffic station has finally convinced us that we have a congestion problem. In any event, from the perspective of framing a referendum question, perception is reality and congestion is top of mind.

More surprising is the overwhelming view that "Expanding the public transit system" is the way to respond to congestion. In a list of 11 policy issues presented in the 2012 survey, this had the highest level of agreement, well above "Improving highway transportation," which ranked ninth. Clearly, the residents of the region reject the idea of easing congestion by building more roads.

The policy issue that garnered the second-highest level of agreement was: "The first task of improving transportation in Metro Vancouver is to make better use of existing transit facilities." This is important to the atmosphere that TransLink must create in the period leading up to the referendum.

The public needs to be assured the existing resources going into transit are being used efficiently. The transit police force costs TransLink $30 million per year. The Golden Ears Bridge is subsidized to the tune of $40 million per year.

These drains on transit resources will need to be addressed. If some of those funds could be redeployed for additional bus services, they could generate about two dollars for every dollar spent because of the fare revenues such services would generate.

When it comes to priorities for new transit services, the public would be wary of putting all its transit eggs in one basket (for example, the UBC subway if the massive $3-billion cost of that option pre-empts all other investments). There was a high level of agreement with the statement "Diversified forms of transportation, such as street cars and light rail, should be encouraged."

When the earlier surveys were done in 1973 and 1990, there was much talk of our "love affair with the car." Now, not so much. About 40 per cent of those surveyed in 2012 agreed or strongly agreed with the statement "The private motor vehicle is essential to our sense of freedom," with almost as many disagreeing or strongly disagreeing.

It is interesting to note that the level of agreement is lowest among those under 18 in age, at 22 per cent, which seems to echo other evidence of a declining interest in driving among the young. This may reinforce the strong preference for investing in transit rather than roads among the respondents as whole. It also appears to indicate that upcoming generations would place more value on transportation choice than has been the case in the past.

This emphasis on choice is reflected in the responses to the statement "Bicycle use would increase if designated routes were expanded," which was supported by 58 per cent of the respondents overall, with higher support (67 per cent) in Vancouver, Burnaby and New Westminster. It would appear that, notwithstanding the focus on transit in the referendum debate, residents wish to see continued effort to encourage cycling as a means of transportation on the part of TransLink and Metro municipalities.

The billion-dollar question: How to pay?

The region's residents are taking the need for new financing for transportation more seriously than they did in the 1990 survey, reflecting the much stronger support for expanding the public transit system that emerged in 2012.

In 1990, 70 per cent of respondents said they would pay more for bus improvements, 64 per cent for SkyTrain and 48 per cent for highway facilities, but they rejected all the suggested methods for collecting these funds!

In 2012, a majority region-wide was willing to approve a set of transportation fees and taxes, provided that they reflect a "user pay" principle and that they don't penalize rush-hour commuters, as would be the case with some "road congestion pricing" schemes.

With a region-wide approval rate of 64 per cent, gasoline taxes are the most widely-supported source of additional source of revenue for transportation, particularly in the central cities of Vancouver (77 per cent) and Burnaby/New Westminster (72 per cent), with similar numbers for the North Shore.

The idea is approved by 51 per cent, compared to 35 per cent in Surrey/White Rock, with approval margins of less than 50 per cent in other parts of the region such as Maple Ridge/Pitt Meadows and the Langleys.

More than half the region's residents (53 per cent) would approve of additional road or bridge tolls as a means of financing transportation, but again this support is heavily concentrated on the Burrard Peninsula, with support in the more suburban parts of the region less decisive. There is also majority support for the use of parking fees to fund transportation, again reflecting the importance of the concept of "user pay" to residents of the region.

In a similar vein, a majority of respondents would support increasing transit fares as a source of additional revenue for transportation.

There is a conspicuous region-wide lack of support for additional use of property taxes for transportation, with 41 per cent expressing support and 42 per cent expressing opposition. While 55 per cent of the respondents from Burnaby and New Westminster support this option, opinion is deeply divided in the outlying parts of the region, but the preponderant sentiment is negative. A financing proposition that included additional reliance on the property tax would be highly controversial and would likely fail.

There is about 50 percent support for vehicle license fees such as the vehicle levy proposed by TransLink in 2000, with the highest level of support in the Burrard Peninsula and more marginal approval or disapproval in the area south of the Fraser River.

While all of this is interesting, it can only be a guide to decision-makers in coming up with what has been referred to as "the value proposition:" What transportation improvements are we going to get and how (and how much) is each of us being asked to pay?

The Mayors' Council and the minister are not in agreement about the need for a referendum on new transportation revenues, but anyone familiar with our government structure knows that the province holds the cards, and so there will in all likelihood be a referendum.

What they do agree on is that any referendum should have a good chance of success, because a failure would be a serious setback to the sustainable development of our transportation system.

Although residents of the region have consistently rated transportation as one of the region's most important priorities, any package of new revenues to pay for it will be a hard sell. (Indeed, asking people to vote for new taxes or charges is like asking the turkeys to vote for Thanksgiving.) The prospects of success will be improved if readily available information on what the public will support is used in framing the question, and the Urban Futures Survey 2012 is a valuable and unique source of this information.

While crafting such a proposition is fraught with peril, there is considerable evidence from the survey that residents understand if they want more, they will have to pay more somehow.