Canada once was an active environmental leader, helping coax other nations into such landmark international measures to protect the planet as the Montreal Protocol to defend the ozone layer. 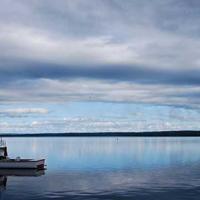 Facing Millions in Cuts, Environment Canada Prepares to Get Lean

That was then. This is now.

Canada walked away from the Kyoto Protocol in 2011. Now, the Montreal Protocol appears to be one of seven important international conventions to prevent the spread of hazardous toxins and other pollutants that the Conservative government quit "engaging" on in recent years.

Canada remains a member of the conventions (so far), but will no longer participate through diplomatic channels in any of their ongoing collaborative management, or in talks to expand the conventions' coverage. Canada's disengagement from the conventions was revealed in emails exchanged in 2011 among several high-ranking staff at the Department of Foreign Affairs and International Trade (DFAIT), and released in March to the Broadbent Institute's Press Progress project under an Access to Information request.

The emails disclose that DFAIT eliminated its Environment and Sustainable Development Division in 2010, as part of an organizational overhaul -- the emails refer to it as the "New Business Model" -- to orient the department more narrowly in support of Canadian trade. As a result, "all [environmental] expertise has long since left" the department, one official writes. Senior ministerial deputies decided, another writes, "that DFAIT would no longer play on the international environmental policy files (apart from climate change)."

In one of the emails, Daniel Daley, identified as "Director-MDE," reports to a colleague that since the implementation of the New Business Model, "DFAIT no longer has an environmental policy capacity with respect to any of the following multilateral chemicals conventions."

The seven-bullet list of conventions that follows is redacted. But some legal legwork by Lucas Henderson at the Environmental Law Centre at University of Victoria unearthed the most likely candidates (the header on one of the emails appears to confirm that the Rotterdam Convention at least is certainly on the list).

The conventions that Canadian diplomats no longer "play" on include global agreements on the movement of toxic and hazardous compounds, and on the prevention of pollution at sea.

Several are significant in light of Ottawa-backed proposals to increase tanker traffic off the British Columbia coast, and the ramping up of development in the rapidly melting Arctic Ocean.

Here is the unconfirmed list of chemical conventions that, it appears, DFAIT will no longer participate in:

London Convention on the Prevention of Marine Pollution by Dumping of Wastes and Other Matter.

Initially adopted in 1972 to control the dumping of toxic materials at sea, it was updated in the wake of the Rio Earth Summit in 1996. It includes an explicit application of the Precautionary Principle in favour of preventing impacts, largely prohibiting the dumping of anything not on a list of materials considered safe.

The Basil Convention addresses the temptation for poor countries to become dumping grounds for cast-off First World toxins. It bans the export of toxic waste -- with the odd exception of radioactive waste -- from developed nations to developing ones. Efforts have been made to extend the ban to ships, which may contain asbestos and other toxins, destined to be broken up for scrap in poor nations. Canada has opposed that extension.

MARPOL: International Convention for the Prevention of Pollution From Ships

Agreed to initially in 1976, after a series of oil-tanker accidents and spills, MARPOL is the world's primary collective instrument to control oil and other harmful marine spills. Initially it dealt only with oil, but subsequent annexes, the most recent in 2005, deal with hazardous liquids carried in bulk or packaged form, the dumping at sea of garbage or sewage, and marine air pollution.

This convention works to reduce pollution released to the air and carried downwind, sometimes for thousands of miles. Airborne pollution of Asian origin, for example, has been detected in Canada's high Arctic. Research has similarly recorded a plume of toxins carried downwind from the tar sands region. Parties to the CLRTAP commit to develop policies to combat such emissions through shared research and monitoring.

Widely applauded as one of the most successful international treaties ever, and the only one to be ratified by all 197 world nations and the European Union, the Montreal Protocol provided for the phase-out of hydroflourocarbons and other chemicals identified as damaging the earth's ozone layer, which protects terrestrial life from excessive ultraviolet radiation.

The convention is intended to reduce the illicit sale and transfer of pesticides and other hazardous chemicals, particularly to developing countries. Importing countries may ban the entry of listed substances and exporters must help enforce those bans. In 2011, Canada became the only member of the G8 to oppose the listing of chrysotile asbestos -- a known carcinogen mined in Quebec. Canada dropped its opposition the following year.

Requires member states to take action to reduce and eliminate the intentional or accidental production of persistent organic pollutants (POPs) -- toxins that bio-accumulate and move up the food chain, posing dangers to human and wild life. The operations of the heavy-oil industry generate substantial volumes of POPs.

The decision to de-staff DFAIT's environment divisions, and disengage from the ongoing international discussions around several of these conventions, doesn't mean that Canada will no longer abide by them.

It may be a first step, however. In addition to Kyoto, Canada earlier this year became the only country to withdraw from the United Nations Convention to Combat Desertification.

Meanwhile, some of the conventions that Canada had dropped from its international do-list require ongoing consultations among their signatory parties. Signatories to the Montreal Protocol, for example, meet every three years to review its progress. DFAIT's disengagement leaves in doubt whether Canada's interests are being reflected in those meetings.

Federal commitments to provide "world class" spill defences against the hazards of proposed increases in international tanker traffic off the west coast, for example, would seem to call for an active role with other nations to ensure that the London and MARPOL conventions adequately protect B.C. coastline.

In the Arctic, Canada is a member of the Arctic Council, a body representing the five nations with Arctic coastlines; its mandate explicitly includes environmental care. Canada must also deal with the United States, one of the few nations not a party to the international Law of the Sea, over the precise location of a long but undefined shared maritime boundary in the Arctic.

The emails do not address how DFAIT will handle those and other obligations under its international responsibility in the absence of its departed expertise.

The Harper government's antipathy to environmental causes is well established. In covertly turning its back on cooperation with other nations to manage evolving global health threats like toxic wastes, airborne and persistent toxins, and marine spills, it took another seven steps back from the defence of Canadians' natural security.