In 1865, David Reesor rose in the Legislative Council of Upper Canada to argue that if the prime minister was granted the power to appoint senators he would "deluge this House with party tools." Unfortunately, Canada's founders did not heed his warning, and a 150-year flood began. Liberal leader Justin Trudeau made the right move this week by partially damming the deluge of partisanship in the Red Chamber. 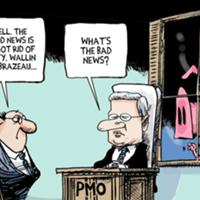 What We Should Do with the Senate

Admittedly, Trudeau's policy execution left much to be desired. Senators themselves were caught off guard and confused by the change. Some were supportive, others dismayed. It's still not clear how committee memberships and research budgets will be distributed to these newly "independent" senators.

But with the move, Trudeau highlighted the partisanship and patronage that has delegitimized the Senate and undermined its democratic role. When we say the Senate should be a "chamber of sober second thought," we mean that it can bring to bear expertise and viewpoints that differ from those forged under the conditions of party strife. But today, even when senators do their job well, we are suspicious of their motives. And when they are shown to be party shills and fundraisers, meeting in the Prime Minister's Office to accept payouts and talking points, our cynicism is justified.

By proposing that senators should be selected by a "non-partisan public process," Trudeau challenged the conventional wisdom that our only alternatives to Senate dysfunction are to abolish the chamber or elect senators the same way we elect MPs. While he did not say much about what a non-partisan selection process might look like, it's worth exploring the options. Before doing so, let's consider some of the reasons why a non-partisan Senate is desirable.

Political parties are important to democracies. Parties aggregate public issues and propose alternative visions of what the country should strive for. When citizens elect party members, they have a sense of the overall policy framework they will get. Elected party members can take decisive, coordinated action in Parliament.

But parties are also electioneering machines. They often focus on short-term electoral gains rather than long-term public goods. They tend to approach all issues in zero-sum terms. Party politicians reflexively attack the policy ideas of other parties, regardless of merit, and emphasize wedge issues that will help in the next election.

We don't need a second chamber with these shortcomings. A non-partisan Senate could bring alternative viewpoints and longer-term perspectives to our policy debates. Senators could more credibly speak for the public interest, as they see it, without deference to the prime minister or party who handed them their job.

So what would a non-partisan selection process look like? Here are several options:

1. Elect Non-Partisan Senators. We could elect senators, but forbid them to run on party platforms. (In Alberta elections to propose Senate candidates, most ran as party representatives.) Many municipal councils in Canada, as well as the legislatures of the Northwest Territories and Nunavut, are officially non-partisan. On the upside, this would give citizens some say in choosing senators. However, although many municipal councils are officially non-partisan, partisanship nevertheless influences elections and governing. This approach might replace open partisanship with hidden partisan alliances.

2. Senate Selection Committee. A national committee, or committees in each province, could be charged with the task of identifying candidates for the Senate. They would choose people of diverse experience and expertise, but they would not be compelled to favour party stalwarts of any political stripe. The PM would retain the power of appointment, but would choose senators only from the prepared list. Skeptics may question whether committees can act in a non-partisan way, but there are working examples such as the selection of federal judges in Canada and the House of Lords Appointments Commission in the United Kingdom. The challenge is to design a credible process to choose who will sit on the committee and to define the criteria they should use when selecting senators.

3. Random Selection. An innovative but radical step would be to randomly select ordinary citizens to sit as senators for a limited period of time (perhaps one or two years). Admittedly, such citizens might not possess the experience or expertise that many of our current senators bring to the legislative process. But analysis of the British Columbia and Ontario citizens' assemblies on electoral reform has shown that with proper support and access to expert opinion, ordinary citizens can tackle complex policy problems. A randomly selected Senate would produce an assembly that is representative of the Canadian population in all its diversity.

Clearly, we disagree with Prime Minister Stephen Harper and NDP leader Thomas Mulcair when they say that only elected senators are legitimate. The Supreme Court, the Parliamentary Budget Office and the auditor general are all institutions that enjoy considerable public support. Their legitimacy derives not from election, but from their non-partisan independence and the high-calibre people who hold these positions. They improve laws and law-making in Canada; they don't make laws.

It is not in Canada's interest to have two elected chambers, opposing each other and potentially creating the sort of policy gridlock that we see in the United States. Instead, the Senate should play an advisory role, reviewing legislation and challenging the government when its proposals are judged to be incomplete or counter to the public interest.

Imagine a Senate where debates are unconstrained by party discipline and the electoral agenda. Imagine how MPs themselves might argue for and against legislation, if they wanted to persuade non-partisan senators of the merits of their law proposals. Let's stop the partisan deluge and imagine the Senate that Canadians actually want.