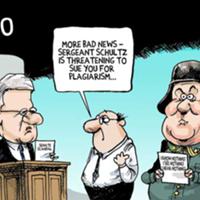 What, Harper Save Face? Not with That Base

Big money is secretly paid to a dubious political figure. When publicly revealed, cover-up allegations cause more damage, ensnaring government staff in the leader's office. RCMP investigate the scandal and eventually, though uninvolved, the leader is forced to resign.

Is this the possible trajectory of Conservative Prime Minister Stephen Harper in 2014?

Perhaps. But this storyline is about British Columbia politics in the 1990s.

While there are many important differences, some key elements of B.C.'s "Bingogate" bombshell bear a noteworthy resemblance to today's Senate scandal.

And if similarities continue, so will irresistible pressure on Harper to resign while the Conservative Party still has time to find a new leader before the 2015 election.

Anatomy of a secret payment

"Bingogate," which involved the Nanaimo Commonwealth Holding Society (NCHS), exploded in May 1992 when charities alleged the NCHS skimmed money from their bingo fundraising efforts and funnelled some to the NDP, as well as others.

In 1994 the NCHS pled guilty to misdirecting funds, but the scandal deepened after a forensic audit ordered by then B.C. premier Mike Harcourt was released.

Released in Oct. 1995 by accountant Ron Parks, the audit revealed that BC NDP's table officers had learned privately in 1993 the party had accepted a sum of money from the NCHS a decade earlier, and -- on lawyers' advice -- repaid $60,000 to sever all ties.

"The table officers had no evidence the money had originally come from diverted charity proceeds" and felt "return of the money would sever the one outstanding link between the party and the NCHS," the Parks Report noted, according to Harcourt in his 1996 book, A Measure Of Defiance.

"Party officials who made the repayment were imprudent in not advising me of their actions," Harcourt wrote. "I was not aware of the payment until Parks raised the matter in an interview with me in April 1995."

But despite Harcourt initiating the audit, the NDP was accused of trying to "cover up" its ties to the NCHS.

Harcourt had absolutely no involvement in the NCHS scandal or the repayment, but his senior staff was forced to deal with it for two years, taking away time and resources that could have been more productively spent on positive issues.

The audit exonerated Harcourt, but the damage had been done. On Nov. 15, 1995 Harcourt announced he would resign when a successor was chosen.

New BC NDP leader Glen Clark went on to accomplish an upset surprise victory over BC Liberal leader Gordon Campbell in the May 1996 election, in part because Harcourt's resignation left the party enough time to regroup.

Ignorance is no excuse

The Senate scandal is clearly different but features some similar ingredients: the secret payment of money -- to Senator Mike Duffy for improper housing expenses; the involvement of top Conservative officials -- who agreed to pay Duffy's debts until the sum became too large; the entanglement of top political aides -- leading Harper's ex-chief of staff Nigel Wright to personally pay Duffy and resign when it became public; and an RCMP investigation.

Harper claims to have no knowledge of the Duffy payment fiasco, and no one faces charges, but the stunning details continue to erode his credibility.

Will Harper, regardless of his personal situation, decide the Conservatives can't survive the 2015 election without a new leader? Or could Conservative MPs make that decision for him?

After all, both Liberal prime minister Jean Chretien and British Conservative prime minister Margaret Thatcher were forced out of office by their own parties, despite winning successive majority governments. Harper has won three times, but only one majority.

Mike Harcourt's unfortunate plight, like the Watergate scandal in the 1970s, showed that "follow the money" can prove politically fatal for leaders, regardless of their lack of involvement.