"And everybody praised the Duke
Who this great fight did win."
"But what good came of it at last?"
Quoth little Peterkin.
"Why, that I cannot tell," said he,
"But 'twas a famous victory." 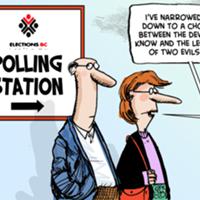 How the BC NDP Blew the Election

As I surveyed the rubble from the recent election I thought of Robert Southey's grandfather-grandson exchange as the former tries to explain the Battle of Blenheim after turning a skull over with his plough.

If this had been a sporting event the outcomes of which never really matter, I would congratulate Premier Clark and her colleagues for "a famous victory." But this was not a sporting cup but the future of our province that was at stake and rather than being an open debate on the real issues it became a classic Liberal/Socred political victory, B.C. style.

Mike Smyth's recent article in the Province told how the Liberals were able to condense the entire matter into an image of a weather vane. And they did that and won handily over a party that had once had a 20-point lead. The whole point of the Liberal campaign was to turn the issues on their heads and use their own weaknesses to win.

It was mindful of how George W. Bush, in 2004, a draft dodger, was able to paint his much-medaled opponent, John Kerry, into a coward.

No, I'm not blaming the Liberals for dumbing down the election and winning through the electronic sleight-of-hand for which it's famous. That's how elections are, sad to say, won in this province. What is sad is how the NDP lost.

The NDP lost, flat out, and Adrian Dix must take full blame. Of course direction came from the election committee and they ought to be horsewhipped but the guy leading the parade must be held responsible.

It's not as if Dix wasn't warned -- by me for one who fruitlessly advised him that politics is a blood sport and that he had to depend upon pounding home the main issues which were, a corrupt, tired government, a government that had fiscally ruined BC Hydro and raised the per capita debt five times. These were his issues to pound home. Given the overwhelming facts at his disposal, Dix had the Liberals dead to rights.

Instead, Dix chose what I called a "fart a day" approach which placed before the voter, in ever decreasing importance, things he would do "one step at a time." It was pathetic. I thought 2009 was bad but this one was infinitely worse.

For the environmentalists the election was disastrous, which means, of course, a disaster for the people of B.C. who care about what their home looks like.

There will be more fish farms and no inspections.

There will be dozens of new private river projects, thus dozens more raped rivers and an ever-increasing financial burden on BC Hydro. Of course there will be no monitoring of private power companies, thus no prosecutions.

Pipelines bearing deadly bitumen will cross B.C. -- at least three of them and we'll be told that "world class" safety measures will save the environment from spills.

Site "C" will be built to the tune of $8 billion and the power used for "fracking" oil and gas thence sent to Prince Rupert to convert into Liquefied Natural Gas for export even though not only is there doubt about markets for the stuff, all indications are quite the opposite

There will be huge increases in tanker traffic up the coast and in Vancouver Harbour.

We'll all be told that these things will be safe and that the government has made us a lot of money.

There will be no process in place for public review of these projects before decisions to proceed are made -- now as before there will be an environmental assessment after the project is a "done deal" and the government will be free, as now, to ignore any findings it doesn't care for.

Does this mean that environmentalists will pack up their tents and surrender?

I think not. It will take a bit of time to lick all the wounds. What it will mean -- and, yes, I'll spit it out -- is protests leading to civil disobedience. Even more weight will be placed on the shoulders of First Nations.

What there won't be for quite a time to come is a need for help from the New Democratic Party. I don't say this out of disgruntlement, although there's plenty of that to go around, but because they've lost their relevance. Indeed, looking back I admit, one can see NDP irrelevance build up by the day in the campaign.

How ironic it is to go from shedding crocodile tears over the eroding Liberal Party only to see them arise like the Phoenix flames leaving the NDP in tatters.

Let me close with this -- the province is divided 30 per cent who hate the NDP, 30 per cent who hate the "right wing" alternative and 40 per cent to be wooed. These numbers have been with us for a very long time. The 40 per cent is not interested in movements full of people who think they have a monopoly on virtue but an opposition ready to govern. This the NDP was and has been, for the most part, unwilling or unable to provide. In short, the NDP has lost its political relevance.

When you look back you see only once the NDP were able to win in a straight fight -- 1996 when Glen Clark beat Gordon Campbell. In 1972 and 1991 the collapse of the Socreds sucked the NDP into power.

The NDP have a lot to answer for -- they let down the province for not being what our system demands -- an alternative to government not some puritan group of higher-purpose persons thinking kind thoughts and keeping socialism alive.