If the Harper government were honest about its policies, it would proclaim for all to hear: "Our goal is to make the rich richer." 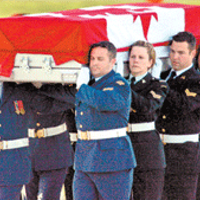 Many Canadians would agree that has been the effect of Conservative domestic policies, but may be surprised to learn it is also true in international affairs.

"Austerity should not be abandoned, says Canada's finance minister," blared a headline in London's Financial Times earlier this month. Before recent G7 meetings Jim Flaherty told the international business paper he was worried that some officials were "pulling back" from slashing public spending and pursuing deficit targets.

"What I worry about is those that suggest that austerity should be abandoned," noted Canada's long-serving finance minister. "I think that's the road to ruin quite frankly."

Flaherty's comment was a response to growing challenges to austerity, notably the European Commission's move to give France and Spain more time to meet EU-mandated deficit targets. It was also a reminder of the Conservatives' banker-friendly response to the worst economic crisis in Europe since the Second World War.

Even with youth unemployment rates in a number of countries at 25 to 50 per cent or higher, Ottawa has repeatedly supported the German-led push for European governments to cut social spending.

The Conservatives have backed this thinly veiled ruling-class effort to weaken labour's bargaining position and roll back the European welfare state.

During a June 2011 visit to Athens Harper forcefully backed austerity measures bitterly resisted by much of the Greek population.

"I certainly admire the determination of Prime Minister Papandreou, and the very difficult actions he's had to undertake in response to problems his government did not create. So we are very much all on his side."

When German Chancellor Angela Merkel visited Ottawa in August of last year Harper reiterated his support for austerity measures. "There are additional things that have to be done" by European governments to end the continent's economic troubles, he said.

"One of the things I appreciate about Chancellor Merkel's leadership is the willingness, including at times of urgency and stress, to not just find any solution but to find correct and good solutions," Harper added.

While supporting austerity measures, the Conservatives have publicly opposed efforts to tax and regulate the banks largely responsible for the economic collapse.

The Conservatives denounced efforts to better regulate speculation in international financial markets. In November 2009 British Prime Minister Gordon Brown proposed a tiny (ranging from .005 per cent to one per cent) tax on international financial transactions. Worried about the plight of investment bankers, Flaherty immediately dismissed the idea of a global 'Tobin Tax'.

"That's not something that we would want to do. We're not in the business of raising taxes," said Flaherty.

For his part, Harper admitted to blocking the G20's bid for an international banking tax.

"Whether it's taking strong and clear positions, for instance, at the G20 on something like a global financial regulation and a banking tax, we don't just say, 'Well, a consensus is developing for that. We'll go along with it.' It was not in our interest. It actually happens to be bad policy as well," the prime minister was quoted as saying in the July 2011 issue of Maclean's.

The Conservatives also spoke out against Washington's late 2011 move to restrict some of the high-risk/high-return banking activities that led to the 2008 economic collapse (the so-called "Volcker rule"). Flaherty and Bank of Canada governor Mark Carney both sent letters to U.S. decision-makers criticizing the reforms.

"I am writing to express my concerns regarding the proposed Volcker rule, which could have material adverse effects on Canadian financial institutions and markets," wrote Flaherty in February 2012.

Flaherty and Carney intervened following a bid by U.S. bankers to spark international opposition to the reforms. That combined with Canadian banks owning major assets in the United States helps explain the Conservatives' position.

The Harper government has consistently supported Canada's banks and the global-investor class. In fact, their entire foreign policy is largely designed around the question: How can we make the world's richest 0.1 per cent even richer?