Labour Day is viewed by some as a sell-out holiday, an act of cooptation by capital and the state. Instead, rebels and radicals are urged to support May Day as the real workers' holiday. The argument is that May Day is a celebration the workers take by direct action, while the statutory holiday of Labour Day is a gift from their class enemy, and like all such gifts, should be treated with suspicion and scorn. 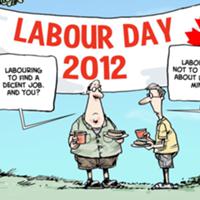 The real history is a little more complicated, for the roots of both days are more similar than contemporary lore would have it. Long before May Day and Labour Day were formally labelled as workers' celebrations, workers signaled their strength and demands in marches, processions and demonstrations. These often took place in May and September, timed to coincide with traditional community celebrations of spring and fall. As early as 1880, Canadian workers were holding dedicated labour parades and processions in the first week of September, and by 1882, U.S. workers joined Canadians in celebrating and in calling for an official Labour Day.

In Canada, the call for a statutory Labour Day received more attention in 1889 when the federal Royal Commission on the Relations of Capital and Labour included it in its list of recommendations. That recommendation, however, was ignored until 1894 when the Canadian government, following the lead of the U.S. government, proclaimed the day a holiday. The year 1894 saw a massive strike in the U.S. against the Pullman railway car company. Scabs and violence marked the labour dispute, and several strikers were shot by federal marshals and troops. Congress and President Grover Cleveland, seeking to make an overture to labour, hurriedly passed legislation to create the federal holiday.

It is not clear why the Canadian government followed suit, but Canadian workers had called for an official Labour Day for years, the Royal Commission's recommendation was still unheeded, and likely the American precedent was sufficient to spur Parliament to move. It's not clear why September was chosen, but several reasons may have been at play. September marked the end of the harvest and workers had long unofficially celebrated in that month. Several U.S. states had already made Labour Day a holiday, and both the U.S. and Canada already had holidays in May and July. There is no evidence that it was chosen explicitly to divert attention away from the first of May.

May Day too was rooted in both workers' traditions and state violence. The first of May 1886 saw strikes and protests in the U.S. for the eight-hour day. In Chicago, the struggle for the eight-hour day extended solidarity to locked-out workers at a harvesting machine plant, and on May 3, police broke up a demonstration there by firing on the protestors. The following day, at a rally against the police violence, someone threw a bomb at the police line, killing several officers. In return, the police fired on the crowd and launched a red scare that saw seven anarchists and labour activists tried and convicted for murder charges on evidence that is still disputed today. Four of the convicted, known as the Haymarket martyrs, were executed on Nov. 11, 1887. In 1889, at the first congress of the Second, or Socialist, International, delegates called for workers to launch demonstrations to commemorate the Haymarket affair and to rejuvenate the struggle for the eight-hour day on May 1, 1890.

This was not a call to revolution. The May Day protest was tied to the renewed efforts of the conservative American Federation of Labor, headed by the staunch anti-socialist Samuel Gompers, to win the eight-hour day. Rather than urge workers to take to the streets, the resolution for May Day action was more cautious, urging only that "the workers of the various nations shall organization the demonstration in a manner suited to conditions in their country."

Thus the two days began in similar ways, and they were originally celebrated in much the same way in B.C. The first Labour Day parade in Vancouver was held in 1890, four years after the city's birth, less than one year after the Vancouver Trades and Labour Council was formed, and four years before the statutory holiday was declared. Floats showing off the skills of the craft unions and marchers were led by the president of the Vancouver Trades and Labour Council to Stanley Park where speakers urged workers "to bring about the time when each man shall enjoy the just rewards of his labour." A tug-of-war competition was won by the longshoremen's team, and the prize of $10, perhaps two or three days' pay for a union craftsman, was to be sent to striking miners on Vancouver Island. Thus Vancouver's first Labour Day was a celebration of workers by workers to develop solidarity and working-class consciousness.

While Vancouver workers did not celebrate May Day as a day for labour in 1890, Victoria workers did respond to the call of the Second International. In contrast to many U.S. and European cities that saw massive marches and unruly street protests, however, Victoria workers held a banquet with speeches by local politicians and labour leaders on the shorter hours movement and wages. Far from being a revolutionary threat, the Victoria May Day was praised by the mainstream press for its peaceful activities and reasonable demands.

But May Day did capture the imagination of workers around the world who transformed the traditional spring festivities into a manifestation of working-class power.

Labour Day, however, soon became more of a community holiday rather than a workers' celebration. As early as 1894 in Vancouver, businesses joined unions in the September parade, and by 1903, B.C. socialists were promoting May Day as the "real" day for labour and denouncing Labour Day as the holiday sanctioned by the conservative AFL. It is not the case, however, that B.C. workers always made a point of seizing May Day and declaring it a holiday. When labour and the left were strong and feisty, they could and did celebrate May Day during the work week, whenever the first of May fell. When they were weak and pusillanimous, they pushed the protests, speeches and demonstrations to the weekend instead.

May Day celebrations were cyclical, dependent on the power and militancy of workers' movements, local issues, and the relative strength of left and right currents in the labour movement. Thus May Day flourished in North America before World War I, but was largely abandoned during the 1920s. May Day become more complicated when the Soviet Union made it a statutory holiday after the 1917 revolution. It became difficult to separate it from "communism," and several governments sought to tame it. France tried to shape it as a day of national unity rather than workers' solidarity, while Fascist Italy banned celebrations. Nazi Germany made May 1 a "National Day of Labour" in 1933, and banned unions the following day.

In North America, May Day was taken up by workers in the 1930s and 1940s, declined during the Cold War, was largely displaced by peace marches and events such as the Stanley Park Easter Be-In in the 1960s, and regained some of its importance in the 1970s and 1980s as Canadian and U.S. governments attacked the labour movement and working people.

Given their complicated histories, how should we think of Labour Day and May Day? Workers created both days, and both days were born of resistance and repression. Both have been used, adapted and recast over time.

Perhaps we don't need to choose.

Perhaps we might celebrate Labour Day as a reminder of what labour has won, and mark May Day in anticipation of what we still need to do.