"No government can be long secure without a formidable opposition." -- Benjamin Disraeli, 1804-1881 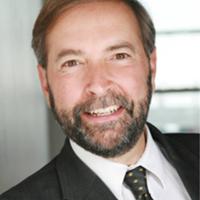 On March 24, the New Democratic Party will choose Canada's new leader of the opposition -- and potentially the country's next prime minister.

One of eight contenders will take the torch from Jack Layton, who became the NDP's first-ever opposition leader after the 2011 election before tragically dying from cancer.

How hard will it be for the new NDP leader to win power?

Consider that Conservative Stephen Harper is the only opposition leader of seven to become prime minister since Jean Chretien took power in 1993.

Reform Party leader Preston Manning and his successor Stockwell Day of the Canadian Alliance also failed to move from opposition leader to prime minister when facing off against Chretien.

And Bloc Quebecois separatists Lucien Bouchard and Gilles Duceppe both did a term -- but had no practical chance to become PM being isolated to running candidates only in Quebec.

So the task is tough and the job is huge. How will they do it?

I've had the opportunity to meet with most of the leading candidates privately in the past few months to get a sense of what drives them, and how they would perform as opposition leader and possibly prime minister in waiting.

This is the first of two columns, restricted by both space and time. My conversations were not interviews -- each candidate is doing lots of those -- but my attempt to gain perspective on their style and approach while learning more about their backgrounds.

As both a columnist and NDP member, I will be endorsing a candidate prior to the vote but have not yet made up my mind whom that will be.

Three candidates are perceived by most media to be in the so-called top tier: Montreal Member of Parliament Thomas Mulcair, Toronto MP Peggy Nash and former NDP president Brian Topp of Toronto.

While the other candidates may not only disagree but prove the pundits wrong when the voting ends, for now it's a useful dividing line.

I've known Topp for over 30 of his 51 years, since we were both student journalists -- he with the McGill Daily in Montreal and I at the University of B.C.'s The Ubyssey, connecting through the Canadian University Press. 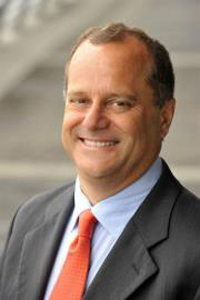 Since then I have seen Topp at various points in his career -- most recently as executive director of the Alliance of Canadian Cinema, Television and Radio Artists (ACTRA) in Toronto, as Layton's national campaign director in the 2006 and 2008 elections and earlier as deputy chief of staff to then-Saskatchewan premier Roy Romanow.

Topp is attempting a big leap – from backroom party strategist who has never held public office to prime minister in waiting -- and to do daily battle with the formidable Harper.

In person, Topp is a fascinating combination. He has the strength to be self-deprecating, easily demonstrating his skills as someone who organizes workers and negotiates with some of the toughest employers in Canada, the TV and film industry.

A conversation with Topp makes you feel like you are being let in on big secrets, becoming a confidante and co-conspirator on even small issues over coffee at Tim Horton's.

Topp is also extremely smart at politics. Layton's success in consecutively adding more seats to the NDP caucus in each election didn't happen either by accident or simply through the NDP leader’s enormous charisma -- Topp's strategy played a big role.

And when Layton attempted to topple the Harper minority Conservative government and replace it with an NDP-Liberal coalition with Bloc Quebecois backing, Topp was his lead negotiator, even writing a book on it titled How We Almost Gave the Tories the Boot.

I disagreed with the NDP's ill-fated coalition plan from the start but without question admire Topp's ability to almost achieve a remarkable result that would have seen Layton in cabinet and Harper in opposition.

Fluently bilingual and raised in Quebec but having worked for years in Saskatchewan politics and Ontario labour, Topp brings together all the elements one could imagine for success in the NDP.

But then, so do Mulcair and Nash.

For a backroom operative unknown to the Canadian public, Topp wisely used a pre-emptive shock and awe campaign launch, appearing to instantly be the frontrunner by rolling out the Broadbent endorsement and more -- a move that seemed to stun his potential opponents and galvanize early support.

Topp's current challenge remains his lack of a seat in Parliament -- and he has rejected the idea of running in a by-election to be called soon in Layton's former Toronto-Danforth riding, instead saying he will run in Quebec, although no seats are currently vacant.

That problem doesn't exist for Thomas Mulcair, who led the early Layton breakthrough by winning a by-election in Montreal's longtime-Liberal stronghold of Outremont in and then helping build the NDP for the Orange Crush wave that devastated the Bloc Quebecois in 2011. 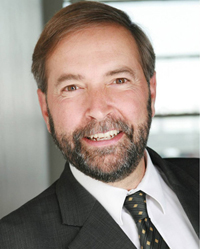 I first met Mulcair at a private lunch with Jack Layton in Vancouver in 2007 -- and was extremely impressed.

We met again last month and one thing is clear -- Mulcair easily comes across as someone who has the elusive "royal jelly" that distinguishes a great politician.

Confident without a hint of overconfidence, willing to disagree politely without rancour and with a polished style that shows his years in public office and as a senior lawyer, Mulcair makes a very strong and memorable connection.

His background, like Topp's but with different emphasis, is also ideally suited to becoming leader of the opposition.

Unlike most NDP MPs, Mulcair, 57, has served in a provincial cabinet, as environment minister in the Quebec Liberal government of Premier Jean Charest from 2003 to 2006.

Mulcair brought in a groundbreaking sustainable development plan but ultimately resigned from cabinet over an issue of principle, refusing to transfer lands from a provincial park to a private condominium developer.

The next year Layton recruited him as his Quebec lieutenant and he handily defeated the Liberals in a stunning by-election win that shocked the country that September.

It shouldn't have been as a surprise -- Mulcair has a record of success.

Born in Ottawa, raised in Laval, north of Montreal, Mulcair worked in the Quebec justice ministry, then as president of the Quebec Professions Board and eventually being elected in 1994 for the first of three times as the Member of the National Assembly for the riding of Chomedey in Laval.

Mulcair has considerable support from Quebec, with 35 of the province's 59 NDP MPs supporting his leadership bid to date.

But Mulcair's greatest challenge is to convince New Democrats outside Quebec, where he is far less known.

With British Columbia boasting more NDP memberships than any other province and almost six times more than Quebec, Mulcair has to both sign up more members in his home turf and win votes here and in Ontario, which has the second highest party total.

Toronto MP Peggy Nash is the third "top-tier" candidate vying to lead the party and has the background to compete with both Mulcair and Topp. 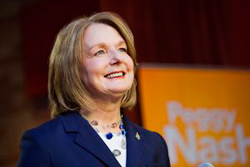 Peggy Nash: Fluent in French, a fighter for women's issues and the environment.

Nash comes out of the labour movement as a long-time Canadian Auto Workers activist who started as a booking agent for a Canadian airline and rose to became the union's senior negotiator -- and in 2005, the first woman to lead bargaining with the auto industry in North America.

Nash is not only tough -- she is someone who doesn't give up.

Nash lost a close contest in Parkdale-High Park riding in the 2004 federal election, was elected in the 2006 election and appointed industry critic, but lost the 2008 election to ex-Liberal leadership candidate Gerard Kennedy.

Nash returned to work at the CAW as an assistant to president Ken Lewenza and was elected NDP national president in 2009.

Nash then won the 2011 rematch with Kennedy in the election to return to Parliament. Nash's background led Layton to appoint her finance critic. (Ironically, Brian Topp then replaced Nash as party president until himself running for leader.)

In person, Nash is poised, a skilful listener and a diplomat -- all traits found in the best negotiators, who know when to press and when to move to another subject.

Her style is different than both Topp's and Mulcair's, not only as a woman running for leader but as someone with a more social activist background who is seen as to the left of her competition.

Fluent in French with an honours degree in French language and literature, and fluent as well in Spanish, Nash is known for championing both women's issues and the environment.

She has also served as an international election monitor in both South Africa and the Ukraine.

Nash's challenge is clear -- she must edge out both Topp and Mulcair, the perceived front-runners, while holding off a challenge from other candidates, particularly Cullen and Dewar, whose chances may depend on second and third choice selections from NDP members.

Nash needs to capitalize on her higher profile in Ontario and within labour to gain signups and support while also mining vote-rich B.C.

The NDP is undergoing simultaneous and enormous political changes, having to adjust to the traumatic loss of Jack Layton at the same time as it takes on the huge responsibilities of forming the official opposition, under the temporary leadership of Quebec MP Nycole Turmel.

None of these three leadership candidates nor the other five NDP contenders can possibly replace Layton. That's never been the goal.

But each of them believes they can follow in Layton's footsteps to succeed with his biggest project of all -- to not just supplant the Liberals to become the opposition but to form a social democratic Canadian government.

The next three months will determine who gets that opportunity to take on Stephen Harper, and what their chances are of success in 2015.