After months of hand-wringing, I am authorized to report that North America has moved beyond the pall of doom and gloom to a more pleasant oblivion. The earthquake, tsunami and nuclear disasters in Japan are all behind us now. No need to fret any further about the ugliness of natural disasters. 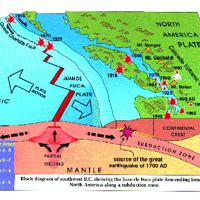 This Political Earthquake Is Inevitable

In the aftermath of this megathrust nightmare, we progressed briskly from a "teachable moment" through "disaster fatigue" to more important matters, like the royal wedding and who might replace Charlie Sheen as TV's highest paid actor. What a relief to forget plate tectonics again.

In my recent (and thankfully transient) role as Harbinger of Doom, I had the unhappy task of warning people that a tectonic event just like the one in Japan (and in Sumatra before that) will -- beyond any reasonable scientific doubt -- hit the West Coast of North America. Same mega-quake. Same mega-tsunami. For the gory details, just Google the Cascadia Subduction Zone.

My book Cascadia's Fault -- The Deadly Earthquake That Will Devastate North America was published this spring, with the intention to wake people up in time to be safer and more resilient when the Big One hits. But other than a few respectful book reviews, the reaction has been weirdly muted, as if people would rather not be bothered with an opportunity to save lives, even, very possibly, their own.

At first glance Cascadia's threat might seem like a "regional" concern -- which is code for saying "it's just those wacky West Coasters getting all hyperbolic on us again." But actually, it's not. Imagine five major cities -- Vancouver, Victoria, Seattle, Portland and Sacramento, with dozens of smaller towns and villages in between -- slammed all at once by the same earthquake. With tsunami wave damage across the entire Pacific Rim -- from Hawaii and Alaska to Japan, the Philippines, Hong Kong, Indonesia, Australia and New Zealand. Disaster on a scale so overwhelming that nothing in our history can serve as a reference point.

One scientist from NOAA says Cascadia's big quake -- when it finally comes -- will be like five Hurricane Katrinas on the same day. Unlike the San Andreas, Cascadia's fault can and does rupture along its entire length in a magnitude 9 megathrust.

For a more familiar sense of scale, simply cut and paste the subduction zone to somebody else's backyard. I did it with a strip of paper held against a globe. I put a pencil mark mid-way up Vancouver Island and another at Cape Mendocino, California, creating a paper proxy for Cascadia's fault. Then I shifted it to eastern Canada.

If Cascadia's fault started at Windsor, it would tear past Niagara Falls through Toronto and Montreal, most of the way to Quebec City. Shockwaves from this hypothetical fault -- if it began in New York -- would rip through Philadelphia, Baltimore, Washington and Richmond to about Charleston, South Carolina. If that's how one defines a "regional issue," then so be it.

Cascadia's fault does not appear anywhere near the top of anyone's official list of things to plan for. Congressional committees in Washington have dithered over hurricanes, Mississippi floods, even the potential New Madrid earthquake -- which would be at least an order of magnitude smaller, with no tsunami attached. But thus far, not a moment of high-profile concern about Cascadia. Same apparent lack of interest in Ottawa as well. I'm sure there must be good reasons for this.

Even though Cascadia's magnitude 9 will have a far larger footprint of damage than any of the famous San Andreas disasters, even though the seismic impacts will be worse than five Katrinas -- why get worked-up about something that may not happen on our watch? There's a 10 per cent chance this quake will happen in the next 50 years. Perhaps we'll be lucky.

Get real, and prepare

When friends ask what it's like being the bearer of so much dismal news, I say: "Honestly? I hate it. I just wish it would all go away." Do you remember when Cher slapped Nicholas Cage in "Moonstruck" and told him to "Snap out of it!"? That's what we should do about Cascadia's fault. Snap right out of this depressing darkness and live in the moment. Whatever happens, happens. Right?

Perhaps Hollywood should make a movie of it. That would be a lot more fun. Think of how cool it would be to see five modern cities knee-deep in bricks and broken glass. Tall buildings and bridges collapsing, dams bursting. The special effects would be spectacular, especially when the tsunami starts washing away coastal towns from Canada to California.

The voyeuristic adrenalin rush of disaster flicks like Twister, Volcano and Deep Impact never goes away. We watch endless re-runs on television. We love seeing horrible things happen on the big screen -- whether it's global warming (The Day After Tomorrow) or alien invasions (District 9, Battle Los Angeles or Super 8) or the end of the world (2012) -- and yet almost nobody wants to wrestle with the real thing. I totally get that. Way too depressing.

But here's the thing. It's not all doom and gloom. When Cascadia's fault does finally rip, we're not all gonna die. Far from it. The overwhelming majority of us will live through it. Just as they did in Japan. Though more than 22,000 died, millions more in that devastated region survived. The essential question is how well we endure the aftermath -- and that depends entirely on how much we do now to prepare for the inevitable. Oops, there I go again.