In its time, the 1988 Sullivan Commission was the most loudly demanded and eagerly debated issue in B.C. education. Today, it's been almost completely forgotten. But it may still offer a lesson to today's politicians and educators, especially those like NDP leadership candidate Mike Farnworth who are calling for a new commission. 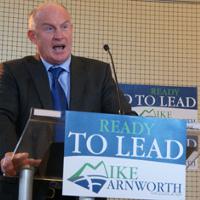 Does BC Need an Education Commission?

B.C. started the 1980s with raging inflation, a recession, and then the Bill Bennett Socreds' "restraint" policies. As with Wisconsin today, the provincial government blamed overpaid public servants -- especially public-school teachers -- for its economic problems.

Not only that, said the Socreds, those fat cat teachers weren't even teaching very well. The debate soon turned into a screaming match and brought the province to the brink of a general strike.

So when new Socred premier Bill Vander Zalm announced an education commission in 1987, everyone was interested -- and involved. Commissioner Barry Sullivan travelled across B.C., "holding 66 public hearings, 54 meetings with teachers, and taking part in 23 student assemblies." All told, Sullivan wrote in his report, "...the Commission received almost 2,350 written and oral submissions, from individuals and groups all over the province."

As well, Sullivan commissioned research into the way we provide education in the province and tried to articulate "a coherent understanding of the school's role in British Columbia society today."

Tragically, Sullivan died at 49 just as his report was coming out. That meant he could not advocate for its proposals.

Some of those proposals were bombshells for teachers and parents alike. He recommended placing children in school when they were developmentally ready, not when they reached a particular age. He also suggested ungraded primary, so what we know as grades 1 to 3 would be a single group of kids moving at their own individual speeds.

He recommended a "common curriculum" from grades 1 through 10, including humanities, fine arts, sciences, and practical arts. To deliver this curriculum, teachers would work in teams, in at least two different subject areas. What's more, they'd be trained to do so.

School districts would devote 80 per cent of their time to the common curriculum, and develop their own programs for the remaining 20 per cent.

Successful completion of grade 10 (as defined by their own school) would entitle students to two more years of education drawn from a wide menu of choices, all of which would prepare them for lifelong learning.

And that was just for starters.

Does that seem like a radical overhaul of education? It was. But the Socreds accepted it and prepared a careful implementation of almost all of Sullivan's recommendations. Education minister Tony Brummett's "Mandate for the School System" led to a detailed program called Year 2000, working out what and how students would learn at each stage of their education.

Development of the Year 2000 program was both exhilarating and anxious. Ungraded primary and the common curriculum were very new ideas, and some educators were delighted with the chance to create new courses and curriculum. Others were alarmed at what seemed like radical change.

Meanwhile the Socreds under Vander Zalm (and then under Rita Johnston) imploded. Mike Harcourt's NDP came into power in 1991 with somewhat different priorities. As Harcourt told The Tyee in a recent phone interview, the NDP had inherited a $4 billion deficit from the Socreds. That was one concern.

Another, in Harcourt's view, was that the schools had "written off 80 per cent of our kids," those who wouldn't (or couldn't) go on to post-secondary. Sullivan hadn't said much about that, though he'd been alarmed by the 35-40 per cent of students who dropped out or failed to meet graduation requirements.

Some of the Year 2000 steps were already annoying parents and teachers, not to mention the far right wing. Harcourt recalls "huge complaints" about the new "anecdotal" report cards that didn't quantify students' progress.

He was also hearing from university profs about the woeful unpreparedness of first-year students. In fairness, this couldn't be blamed on Sullivan; faculty have always loved to complain about student ignorance.

So the Harcourt NDP set about doing its own overhaul of the K-12 system plus post-secondary. The government held on to some Year 2000 ideas about primary education and improved teacher-parent communications. But it revised the report cards and looked for ways to expand access to post-secondary -- even for bright kids turned off by "academic" high school courses.

The NDP developed some intriguing new programs like "applied academics," which would in theory qualify kids for post-secondary even if they didn't take college-prep courses like English 12 and Math 12. Such programs met resistance from both high-school teachers and universities alike.

Meanwhile, of course, B.C. education politics raged on. In the past 30 years, B.C. has seen 22 changes of education minister, nine of them in the NDP decade. In all that turmoil it was easy for policies to shift and for programs to be abandoned.

Larry Kuehn, who led the BCTF during the restraint years, is now its director of research and technology. He sees some ironic parallels between the Year 2000 policies of the early 90s and the "vision for 21st century education" published in December by the Premier's Council on Technology.

"All the themes are similar," Kuehn said in an email to The Tyee. He noted that the Year 2000 actually had a better chance of being implemented than this new vision: "There was funding for these projects and the BCTF had funding from government to carry out a range of research and professional development programs related to making the system work. That really was a period when significant and sound progressive changes could have been made."

By contrast, said Kuehn, the new vision largely reflects Gordon Campbell's personal interests, and the new Clark government won't likely share those interests. He said it will also need a leading role for teachers that the Liberals would be reluctant to give. And student-designed programs of study, Kuehn argued, will get no more support now than they did when they were part of the Socreds' Year 2000.

The late Jane Jacobs famously observed that "during a Dark Age, the mass amnesia of survivors becomes permanent and profound. The previous way of life slides into an abyss of forgetfulness."

We certainly risk such amnesia about education. Having learned more about B.C. education than we'd ever known before, we forgot about the Sullivan Commission and the opportunities it offered. Published before the web, the full report is impossible to find online; a PDF of the summary is available here.

It may even be that Sullivan and the Year 2000 program were not as progressive as we thought. In 2004, Bunni Austin, a communications graduate student at Simon Fraser, wrote a thesis arguing that the language of Year 2000 policy documents showed the reforms were actually intended to create students who would fit comfortably and obediently into a neoliberal global economy.

We'll probably never know the real value of Sullivan's findings. Austin's thesis is one of very few scholarly critiques of Legacy for Learners and the Year 2000 program. Educators, politicians and the public simply lost interest and threw the whole project down the memory hole.

But we also lost a generation of dedicated and idealistic educators who really wanted to make our schools better for the long term. Their research, curriculum development, and training went down the memory hole too. That may be the true tragedy of the Sullivan Commission.