Would you want to live in a city with fewer children? After all, those cities that cannot accommodate families with children, or whose young flee upon turning of age, tend to decline over time since the population cannot replenish itself. As we've heard many times before, children are the future. 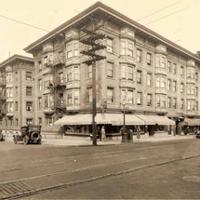 Government Money Is There to Revive Co-op Housing

Which means the future for Vancouver doesn't look as bright as you might think. With its poor track record for affordable housing, Vancouver's inability to accommodate families with children amidst increasing demand is a troublesome fact.

In the City of Vancouver, families with children accounted for a mere 27 per cent of households in 2006, compared to 41 per cent for the rest of Metro Vancouver (Statistics Canada, 2006 census). This uneven distribution of families with children is directly related to the elevated cost of homes and property within Vancouver, as well as the paucity of developers targeting this demographic in their new developments.

From the development perspective, families with children require more space than other households. As developers seek to maximize their profits through maximizing the density of people and units on each site, they often choose to build dwelling types that target households with larger incomes and minimal space requirements. This reality forces the dispersal of households who do not fit this demographic market -- families with children and/or extended families, in particular -- and arguably serves to create homogeneous, less robust neighbourhoods composed of similar households.

This reality is perhaps most evident in Vancouver's downtown core. Yet recently, many people -- high-ranking city planners and respected urbanists alike -- have been misrepresenting census data as a means of framing downtown as a successful urbanism model that is readily welcoming to families with children.

More specifically, these people point to the seemingly significant growth children in the downtown over the past decades to the current 7,000 as evidence that the tower developments of the core work for families with children.

Furthermore, they discuss the policy that requires 25 per cent of large developments for "family-oriented housing" as having an overall positive impact in drawing and keeping these families with children downtown.

This is a far stretch from the realities pointed out by the 2006 census. Take a look at the maps in this article, breaking down the number of children throughout Vancouver's neighbourhoods by age and percentage of population, as well as their spatial distribution across the city.

In the maps, Vancouver's neighbourhoods are given a vertical dimension based on the percentage of children within their boundaries. The maps are colour coded relative to the "Vancouver Total" percentage -- which is neutrally depicted as white and considered the zero per cent baseline. Blue represents neighbourhoods above the total, and copper, those below.

With this in mind, colours get more saturated as the percentage moves away from the Vancouver Total baseline. That's to say that the most intense blue represents the highest percentages, while the deepest copper is the lowest. The percentage range for each colour was chosen based on the data given for each age group and, therefore, varies from map to map. However, each neighbourhood is labeled with its specific percentage which, as mentioned above, determines its height.

One aspect to note is that the Downtown Eastside neighbourhood has been spread between Downtown and Strathcona. This slightly skews their percentages, but not too significantly. Nonetheless, for reasons of full disclosure, it's worth mentioning.

As one can see, the maps explicitly reveal how poorly the Downtown does in providing for families with children in every age bracket from ages zero to 18. Of the categories, it does best with families that have babies (under three years) and toddlers (three to five years).

But even this is not the whole story. Delving more deeply into The City of Vancouver -- Social Indicators and Trends Report (March 2009) -- one of the most recent documents on overall demographic patterns based on the 2006 census data and consequently the root source of the information used to create the maps above -- provides more clarity as to the bigger picture.

That is, within the downtown core the average number of persons per census family ranges between 2.3 and 2.5. Similarly, the average number of children at home per census family ranges between 0.4 and 0.7. This underlines that the small percentage of families that do live in the downtown Vancouver mainly have one child, and that -- cross-referencing that with the maps above -- these are babies and toddlers.

This makes sense, given that the early childhood years are the most forgiving in term of the space required to house the little ones. Once they reach the toddler age, children require more space and independence. Furthermore, this is also the time that parents are having their second children -- at which time the cramped apartments of the downtown core reach their breaking point and ultimately force people to vacate.

There is no mistaking it for those who have read the report, as it readily states: "Areas with a greater number of high-rise residences (apartments and condominiums) tend to see smaller average family sizes. Neighbourhoods with a greater proportion of single-family dwellings see larger family sizes. In Vancouver, this distinction is manifested in the difference between the downtown core and the neighbourhoods that surround it. . . The average number of children living at home increases with distance from the downtown core."

This makes it blatantly clear that child rearing should not be included amongst the "successes" touted by the Downtown core advocates. In every way, the census information reflects the criticisms that high-density living as currently practiced in Vancouver caters directly to households with larger incomes and minimal space requirements.

From this perspective, one can't help but wonder how such seemingly intelligent -- and unfortunately influential -- people can speak to Vancouver's Downtown as a "successful" model for urban densification. Since, in real terms, they are championing one of the most prohibitive family environments in country.

Or perhaps, it isn't that hard to believe, since a lot of the people shouting from the mountain tops don't actually have children.

You can read the full Where Are the Kids? series from the re:place Magazine website here.