On Jan. 27, students from David Lloyd George Elementary and Churchill Secondary schools in Vancouver surprised shoppers at the Oakridge Mall with a cheerful flashmob. First one, then two, then many more students threw off their hoodies and sweaters and joined a dance to the sounds of Bruno Mars' song "Just the way you are." Their performance was videotaped and uploaded to YouTube on Feb. 5. By now the video has been viewed nearly 200,000 times. (You can watch it by clicking on the screen above). 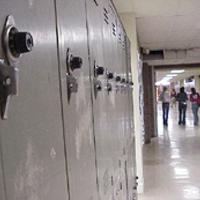 Students wore bright pink T-shirts with the word "Acceptance" and underneath it the phrase "Just the way you are." Principal Darren Mitzel, who uploaded the video wrote, "In honour of International Anti-Bullying Day, two schools came together to create a message of Acceptance and challenge others to use social media as a positive tool. Spread the word!" The "international anti-bullying day" Mitzel refers to is Feb. 23, 2011, also known as "Pink Shirt Day" in British Columbia. In other provinces and countries, the "Day of Pink" or International Day against Bullying, Discrimination and Homophobia is April 13 this year.

The students' energy and enthusiasm were infectious, and what's not to like about their message? Accept other people just the way they are!

Yet I can't help but notice something is missing from both this video and much of the publicity around Pink Shirt Day more generally: the fact that most bullying is homophobic or transphobic.

This is not a comment on the motivations of the student-dancers. In fact, the Vancouver Courier reports that the student who started off the flashmob "found the anti-bullying message significant because she has gay family members and was saddened by recent reports of suicides by gay American teens." (In the fall of 2010, within a period of three weeks, five young men between the ages of 13 and 19 committed suicide after suffering homophobic bullying.)

But in the slogans on their T-shirts, the choice of song, the video caption, as well as in most of the information on the Pink Shirt Day website, one has to look hard to find references to homophobia and transphobia. This is odd, since the whole reason that Pink Shirt Day is Pink Shirt Day is that it celebrates the clever response of a group of students in a Nova Scotia high school to an instance of homophobic bullying. In 2007, a Grade 9 student at Central Kings Rural High School in Cambridge, Nova Scotia wore a pink polo shirt to school. The CBC reported that, "Bullies harassed the boy, called him a homosexual for wearing pink and threatened to beat him up." Two Grade 12 students decided to stand up for the victim, bought 50 pink shirts, and organized a "sea of pink."

It matters that the bullies did not pick on the Grade 9 student because his shirt was, say, considered out of fashion, but because a pink shirt was considered too girly for a boy, and a boy wearing it thus in transgression of a rule that has proven intransigent in many high schools: Thou Shalt Not Cross Gender Lines. Bullying in many schools is a way of policing gender norms and, it should be said, boys are typically policed more heavily than girls. It doesn't matter whether the student in question is actually gay or even questions his gender identity or sexual orientation. The perception is enough.

The comments on the YouTube video of the anti-bullying flashmob are a telling reminder of the homophobia and transphobia at the heart of much bullying. In addition to many general comments of appreciation, Chellspecker writes: "I would have been beat up for wearing a pink t-shirt at my high school in Calgary in the 'eighties. This video actually made me cry. Great dance, great video, great song, powerful message. My hope and prayer is that no one will have to live through what I did growing up gay in Calgary back then." And Coastalboi comments: "Amazing! Lived in the neighborhood and hung out in this mall as a closeted gay kid many, many years. Seeing this inspiring video now, it has brought me to tears."

Wear pink and take it further

So, by all means, wear pink tomorrow, Feb. 23, and encourage students like the ones at David Lloyd George Elementary and Churchill Secondary to continue spreading a message of acceptance. But please do remember: bullying in schools follows predictable social patterns, and homophobia and transphobia are particularly entrenched social patterns.

If teachers and school administrators seriously want to address bullying they will have to be explicit and unequivocal in their rejection of homophobia and transphobia and make it clear by their words and actions that kids of all sexes, genders and sexualities are equally welcome in their schools.