A new Angus Reid poll gives Premier Gordon Campbell an approval rating of nine per cent. When your poll numbers drop to a single digit, it's pretty obvious which digit the public is flashing. 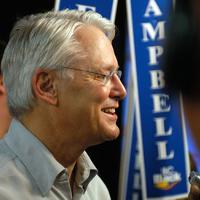 But bad as it looks, there is hope. Campbell still matches up well in selected contests. The BC Liberal leader is running slightly ahead of belief in the Loch Ness Monster, and dead even against cherry vanilla ice cream.

The premier's numbers are too low to allow comparisons against other political leaders. News reports often cite Richard Nixon's post-Watergate poll ratings, but in fact Nixon's approval ratings stayed around the mid-20s even as he was shown to have used the U.S. constitution as a dishrag. Campbell's approval rating not only lags well behind Nixon's lows, but also behind the percentage of Americans who feel Sarah Palin would make a good president.

So to find proper parallels for Campbell's current popularity, it is necessary to look at different measurements -- in effect, to compare societal niche groups. Campbell supporters in B.C. form a group statistically comparable to the percentage of Americans who do not recognize the name Madonna; his support group is statistically smaller than the pool of Americans who have never heard of Oprah Winfrey. They are statistically equal to the percentage of Britons who believe that crop circles are the work of extra-terrestrial beings.

Campbell is running one per cent ahead of Americans who believe Emily Post invented a breakfast cereal.

But there's good news too. Vampires have been popular lately, and Campbell is also managing to stay ahead of them. To be clear, this poll did not rate the likability of vampires, but actual belief in their existence. Campbell support also edges out Bigfoot belief, although all these numbers fall within the margin of error.

If Campbell was a movie, his reviews would match up roughly with the 2007 Eddie Murphy movie, Norbit. According to website Rotten Tomatoes, critical approval for the alleged comedy stands at eight per cent. Critic Mark Dujsik wrote, "Norbit is so bad, it has redefined my concept of Hell." Campbell maintains a one-point lead over that experience.

Poll numbers can change, of course. Campbell is determined to fight. "I'm going to run as long as I'm excited by what’s taking place in the province," he said recently.  Campbell's political determination is exciting news for pollsters -- it suggests that new low-water marks are yet to come. If current trends hold, Premier Campbell may soon approach the approval ratings currently enjoyed by ice cream flavours such as pumpkin and eggnog.

Despite his optimism, there can be little doubt that for Campbell, a rocky road lies ahead. Five percentage points ahead, in fact -- and he's eight points behind mint chocolate chip.