"The most important office in a democracy is the office of citizen." -- Louis Brandeis, U.S. Supreme Court justice, 1856-1941 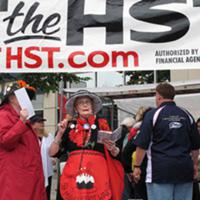 Rescind or recall. Rescind the Harmonized Sales Tax or face the recall of B.C. Liberal government MLAs starting this fall.

Those are the two stark choices facing Premier Gordon Campbell after the B.C. Supreme Court delivered a stinging ruling Friday upholding the validity of the first successful citizens-initiative petition in Canadian history.

Chief Justice Robert Bauman made it personal, too, by quoting Campbell himself in the second paragraph of his decision as saying the initiative was "a victory for democracy."

Then Bauman threw out every one of the arguments made by a coalition of big business organizations whose members help finance the B.C. Liberal Party, while one of their lawyers, former B.C. Liberal attorney general Geoff Plant, sat glumly watching.

But neither lead lawyer Peter Gall nor a single business representative attended court to hear the decision or comment to the media in person; a news release expressing "disappointment" was later issued by the coalition.

Bauman reserved judgement on a potentially even more devastating decision -- whether the HST itself is unconstitutional, as argued by veteran lawyer Joe Arvay, representing initiative proponent and former premier Bill Vander Zalm.

Now the initiative process is back on track -- but it is a slow train that can never force the government to kill the HST -- it is simply an overwhelming expression of public anger that so far the B.C. Liberals have dangerously ignored.

But as of Nov. 15, recall campaigns can begin to unseat government MLAs who imposed the HST.

And following the Bauman decision, Elections BC released detailed results of the initiative petition that suggest which B.C. Liberals are most vulnerable to recall in the fall.

At the top of the list is MLA Donna Barnett in Cariboo-Chilcotin, where 31.5 per cent of verified voters signed the initiative petition, the highest percentage for any B.C. Liberal and second-most in the province.

Close behind are MLA John Slater in Boundary-Similkameen, at 30.3 per cent, Labour Minister Murray Coell in Saanich North and the Islands at 26 per cent and Aboriginal Relations Minister George Abbott in Shuswap at 24.5 per cent.

In total there are 22 B.C. Liberal ridings where more than 18 per cent of verified voters supported the initiative.

Recall is a significant challenge, however, requiring 40 per cent of registered voters in the 2009 election to sign a recall petition in just 60 days.

That's one reason why the percentages aren't the only factor to consider in recall -- others include local campaign ability, voter mobility, financial resources, geography, winter weather and many more.

But while the Fight HST initiative campaign -- which I support -- had 90 days to collect 10 per cent of all registered voters signatures in all 85 ridings at once, recall campaigns can target one or two at a time and enlist volunteers from nearby ridings to help.

And with Fight HST boasting 6,556 registered canvassers for the initiative campaign, no one should think troops are lacking.

So it all comes down to three little letters, HST; two choices, rescind or recall; and one enormous problem for the B.C. Liberal government.