Industry Minister Tony Clement's tweets aside, Stephen Harper's Conservatives know that changing the 2011 long form census from compulsory to voluntary makes it useless for public and private Canadian decision-makers. In fact, that's exactly why they're doing it. 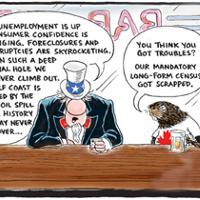 Why Attack the Long Census?

An economist, the prime minister understands the value of statistics. He appreciates that authoritative statistics on the relative social and economic well-being of individual Canadians empower the disempowered to demand government programs (higher taxes) to reduce poverty and disparity and promote upward mobility.

He also appreciates the need to dumb them down to facilitate stripping government back to its core functions: a strong military to defend the nation abroad, more police, prisons and tougher justice to defend the citizen at home and an unfettered free market to create wealth and employment through ever-lower taxes, especially on business and the well-to-do. Addressing social and economic inequality should be left to individual initiative and private charity.

That's why he's decided simply to stop gathering the numbers that provide an accurate socio-economic profile of Canadian society and, in the process, allow Clement to spread so much prevarication and misinformation that Canada's chief statistician, Munir Sheikh, was forced to resign.

"I don't believe any tax is a good tax," Harper has said. His compatriots on the conservative right have chimed in with similar aphorisms. "There is no such thing as society. There are only individual men and women," former British prime minister Margaret Thatcher opined. "If anybody redistributes my income, it had better be me," former Manitoba Conservative premier Sterling Lyon pronounced.

Unlike British Red Toryism, which accepts a role for government in reducing structural inequality, Canadian post-modern populist conservatism considers inequality as natural, the outcome of individual free choice. Individuals, not governments, must "bootstrap their way up," Saurette continues.

Saurette notes that from the day it was sworn in, the Harper government was determined to eliminate government funding for any and all forms of social advocacy, their agencies and research, at home and abroad.

Many other casualties so far

The elimination list is long and getting longer -- and it is stunning. Here's a small sample: the Court Challenges Program, the Status of Women, the Canadian Council on Social Development, the Canadian Council on International Cooperation, StatsCan's workplace and employer survey, which tracks job vacancies, benefits, and private pensions; StatsCan's survey of financial security, and StatsCan's longitudinal survey of immigrants to Canada.

Canadian post-modern conservatives, like their American Tea Party counterparts, "know that winning the war of ideas can offer significant returns for political movements" and "have been explicitly planning what exactly conservatives need to do to win that war and capture the institutional structures and resources that dot the ideological battleground," Saurette writes in the online journal The Mark.

Harper's ideological goal, he continues, is nothing less than "the transformation of the broad public philosophy of Canada and the cultivation of an enduring set of conservative values and principles in Canadians."

Harper is a graduate of the Calgary School, a group of University of Calgary political scientists, neo-conservatives all, who follow the teachings of German-American political philosopher Leo Strauss. Strauss had a deep antipathy towards liberal democracy and its "moral relativism."

Harper, too, denounced the "moral relativism" of the liberal state in a 2003 speech to the libertarian and socially conservative Civitas Society: "Moral relativism simply cannot be sustained as a guiding philosophy," he said. "It explains the lack of moral censure on personal foibles of all kinds... [I]t leads to... tribalism in the form of group rights."

Shadia Drury, Canada Research Chair in social justice at the University of Regina, is a leading expert on Straussian conservatism who taught at the Calgary School for 27 years. Drury warned in a 2004 interview with The Globe and Mail that the Strauss philosophy displays "a huge contempt for democracy" and exploits populist sentiment to strip away the rights of minorities and dismantle what is left of the welfare state.

"They want to replace the rule of law with the populism of the majority," she said.

If you are determined to halt, if not roll back, Canada's advances in social and economic equality, turning the long form census into an unreliable statistical mishmash takes you a giant step towards your goal.